Lets say I have a positively charged conducting sphere of Q. The electric field outside the sphere is

Now suppose this sphere is enclosed inside another hollow conducting sphere of -Q charge. By Gauss law, the electric field is still the same?

Won't the negatively charged outer sphere reinforce the electric field, causing it it be larger?

The field from a infinite sheet of charge is

But the field between 2 oppositely charged infinite sheets is

Why is this not the case above?

It sounds like the math is not the problem. It is visualizing the geometry. 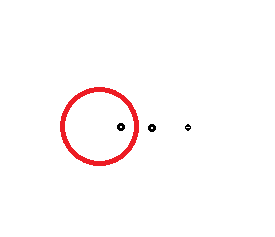 Do this with a sphere. If you are outside as shown above, all the E field contributions are more or less to the right. It works out just the same as a point charge E field. If you are inside, contributions from the left and right cancel perfectly. The total is 0. This property of the inverse square law has always struck me as one of the coolest things in physics. 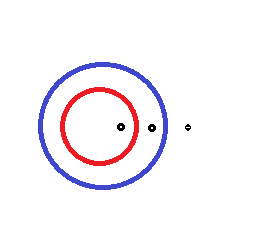 For the middle point, the red sphere adds up to the same as a point charge, but the blue sphere contributions add to 0.

For the outer point, each sphere adds up to the equivalent of a point charge. In this case two opposite point charges at the same point would cancel. 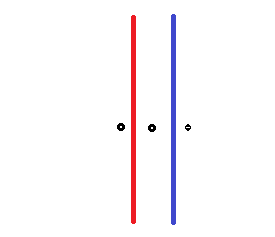 For a plane, by symmetry the contributions add up to an E field perpendicular to the plane. The plane is infinite, and so the charge is infinite. But some is infinitely far away. The E field works out to be finite and uniform.

For two oppositely charged planes you get 0 on the outside and reinforcement in between. This is indeed similar to the two spheres, even though there is no charge off to the left.

Imagine the two spheres getting larger and larger, so the geometry looks more and more like two planes. The E field should approach the same solution as the two planes.

For the middle point, the red sphere matters. For the spheres to become like the planes, we must keep the charge density constant as they grow. This means the total charge grows larger. The total red E field is equivalent to a larger, but more distant point charge.

The field inside a conducting sphere due to the charge on that sphere is zero. You are left with only the charge on the inner sphere determining the electric field between the spheres. This is a direct consequence of Gauss' Law - it is only the charge enclosed inside the surface over which you integrate that contributes to the field across the surface. The rest follows from superposition.

0
Why the outer shell in the cylindrical capacitor doesn't contribute to the field of the capacitor?
22
Field between the plates of a parallel plate capacitor using Gauss's Law