How do electrons distribute themselves along a wire attached to one pole of a battery?

Let's assume we have an electrochemical cell, like an AA battery. We attach a long straight wire to the negative terminus of the battery, the other end of the wire extends right away from the battery along the battery's long axis.

How do free electrons distribute themselves along such a wire?

We know that the negative terminal of a battery has a surplus of free electrons. We also know from If we connect a long wire to a battery, will battery produce more electrons? that the battery will pump some extra free electrons into the wire.

Electrons mutually repulse each other. So in an isolated charged conductor they would distribute themselves evenly, if the electric field is uniform. In our case the electric field is not uniform: the positive terminal of the battery would tend to pull the free electrons toward the battery. So we have two opposing forces. Also, the electrons do not know where the negative electrode of the battery ends and the wire begins. For them the electrode with the attached wire is the same as just one big negative electrode.

We know that electrons distribute themselves so that potential difference between any point of the wire and the positive terminal of the battery would be about the same. The voltage drop along the wire occurs only because of the resistance of that part of the wire, which is rather small.

What mathematical function would describe the distribution of the free electrons?

Would the charge density be about the same along the whole wire, or it will be considerably higher near the negative terminal of the battery (because of the pull by the positive terminal)?

Edit №1: If the task is too complex, let's simplify it by assuming the wire has no resistance, and it is infinitely thin, to disregard the surface area / effects. I am interested in only the lengthwise distribution along the wire.

Edit №2: What I seek to understand in this case: how would free extra electrons distribute themselves along a conductor in an external electric field to create an equal potential?

Now I see that the task, as I put it originally, is indeed very complex, mostly because of the complexity of the battery's internal structure.

Let's simplify the task to the utmost.

Firstly, let's approximate the battery by such electrochemical cell:

Let's disregard the casing and the edge effects.

My view is such a cell can be approximated by a parallel plate capacitor, where there is a limited and constant amount of charges on the plates and the electrolyte can resupply the charges if they flow away from the plates. Thus, the charges in the cell would distribute themselves like they do in a charged capacitor: along the opposite surfaces of the electrodes.

Now, let's add a wire to the (-) electrode of the cell by sequentially adding infinitely small portions of an ideal conductor.

Now, for each small capacitance to have the same potential it must have the same charge. Thus, the free extra electrons in the wire will distribute themselves evenly along the wire, and the external electric field of the positive electrode will be canceled out by the electrons that pile up at the opposite surface of the negative electrode, like in a regular capacitor.

Is this reasoning correct? Can you provide a more scientific explanation?

The same follows if we further connect one more piece of wire (wire 2), and so on, thus every other piece of wire will be reaching the same potential as the negative electrode of the battery, as the electrons will flow into it to neutralize the potential difference.

Is this reasoning correct? Can you provide a more scientific explanation?

Let's further simplify the task. Assume we have a charged parallel plate capacitor. We connect a long wire to one plate. We know that potential difference between the positive plate and the wire will be the same at any point of the wire. 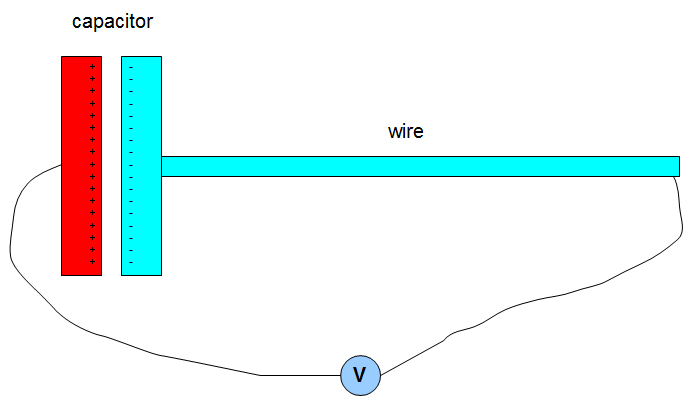 How do free electrons distribute themselves along the wire to create an equal potential at any point of the wire? (disregarding the surface and edge effects)

There is no effect on the electrons. It is not like a pipe connected to tap and stopped at the other end so that even before unstopping the other end the molecules are being squashed inside. No repulsion as you are thinking of. In the battery case as soon as you connect the + end the current starts to flow. Think of it as not a mechanical force that drives the electrons but the potential difference. so at least two terminals need to be there.

The electrons do not even enter the wire, because the redox reaction between the substances in each of the nodes never occurs. Once the wire is connected to each of the nodes, electricity will flow through as electrons will be more attracted to the node with the greater reduction potential.

Not the answer you're looking for? Browse other questions tagged electrostatics electricity electrons electric-fields or ask your own question.

0
How do electrons flow from the earth to body that has been connected to a wire?

2
Capacitor Charging and Discharging when connected to the ground
1
If we connect a long wire to a battery, will battery produce more electrons?
1
Does a capacitor experience a Newtonian reaction when being charged?
5
Why electrons flow through a wire connected to a battery?
0
Electrostatic Induction and Flow of Charges
1
How does distance effect the flow of charges between a capacitor's plate and battery
1
Is there even a slight transient current when a piece of wire is connected to a single terminal of a cell?
2
Connect negative terminal of a battery to Earth
0
Does an open circuit have electrons accumulate in it?