I've attempted to model the inelastic collision between a moving mass and a large stationary object, e.g. dropping an ball on the floor, for analysing the approximate kinematics and heat dissipation throughout the collision. I modelled this using a mechanical vibrating system with one degree of freedom that consists of a mass $m$, attached to a single spring, of stiffness $k$, and a single dashpot damper, of damping rate $\lambda$, "connected in parallel", as shown below: 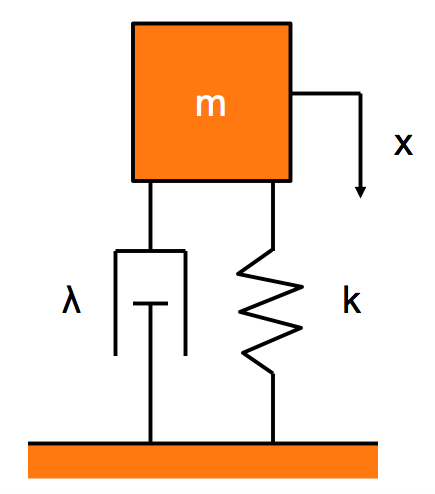 $x$ is the displacement of the mass from the point the collision just begins. The relationships between the tensile force, $T$, and the displacement, $x$, for the spring and dashpot is, respectively, assumed as the following:

BASIS FOR MODELLING AND ASSUMPTIONS

I selected this system as the spring represents the elastic nature of the collision (conversion between KE and elastic PE), and the damper represents the inelastic nature of the system (causes dissipation of mechanical energy). Therefore, this model will have parameters $k$ and $\lambda$ that will need to be determined by experimental means for a particular collision.

The model is assumed to be valid only for positive values off $x$, as negative $x$ implies the colliding masses are not in contact, so the effects of the spring and dashpot in the model will disappear. Also, it is assumed that the large mass is stationary and is massive enough to not move due to the collision. Just before the collision occurs, at time $t=0$, the mass $m$ will be travelling with initial velocity $u$ in the direction of $x$. It is assumed that the mass system has one degree of freedom, such that it cannot travel in any direction not parallel to $x$, and it cannot rotate, such that the extensions of the spring and dashpot must be the same. The springs and dashpots have negligible mass.

The differential equation of the system is obtained by Newton's 2nd Law:

I obtain the following:

If the system has $z=\sqrt{\frac{k}{m}}$, the system is critically damped, and mechanical energy will be dissipated at the maximum rate.

If the system is either critically damped, or overdamped, then all of the kinetic energy will be dissipated throughout the collision, so the mass will remain attached to the large mass after the collision.

For the case of a mass that is underdamped, the velocity is given (by differentiation of $x(t)$) as follows:

and the energy dissipated by the collision is:

2) It seems that for a particular collisions, the KE-gain is independent of the speed of impact of the smaller mass. If I repeated the experiment with the same two collision masses, is there reason to believe the collision parameters, $k$ and $\lambda$ would change? If not, as a bonus round, would anyone have the resources to experimentally determine that the KE-gain for collisions, (where the two colliding masses are kept the same, but the speed of the impacting mass is varied in the experiment) is independent of the impacting mass's speed?

Modeling contact force as a linear spring would be a bad fit for most geometries. Take a look at the contact mechanics page on wikipedia to get an idea of how force and displacement are related for various geometries. This of course highlights that the geometry of the objects colliding can make a huge difference. For example a tennis ball actually rebounds by compressing the gas inside the ball and a punctured tennis ball bounces completely differently than a new one. This exemplifies how geometry and how the deformation occurs will drastically effect your force vs. displacement relationship.

Looking at an overview of viscoelastic materials, it appears that your damper is a pretty good approximation of energy loss in viscoelastic materials. I believe this is the primary energy loss mechanism for rubbery materials. So for these materials I think your model would work pretty well for determining the heat produced locally from the collision. For more metal and glass like materials there may be significant portion of the the energy that gets dissipated as sound waves; though, I'm not very certain about that.

Not the answer you're looking for? Browse other questions tagged newtonian-mechanics kinematics collision vibrations or ask your own question.

4
What is the relationship between force and momentum in collisions?