How does the Moon cause the tides?

I am considering the following question, but I can't quite figure it out... 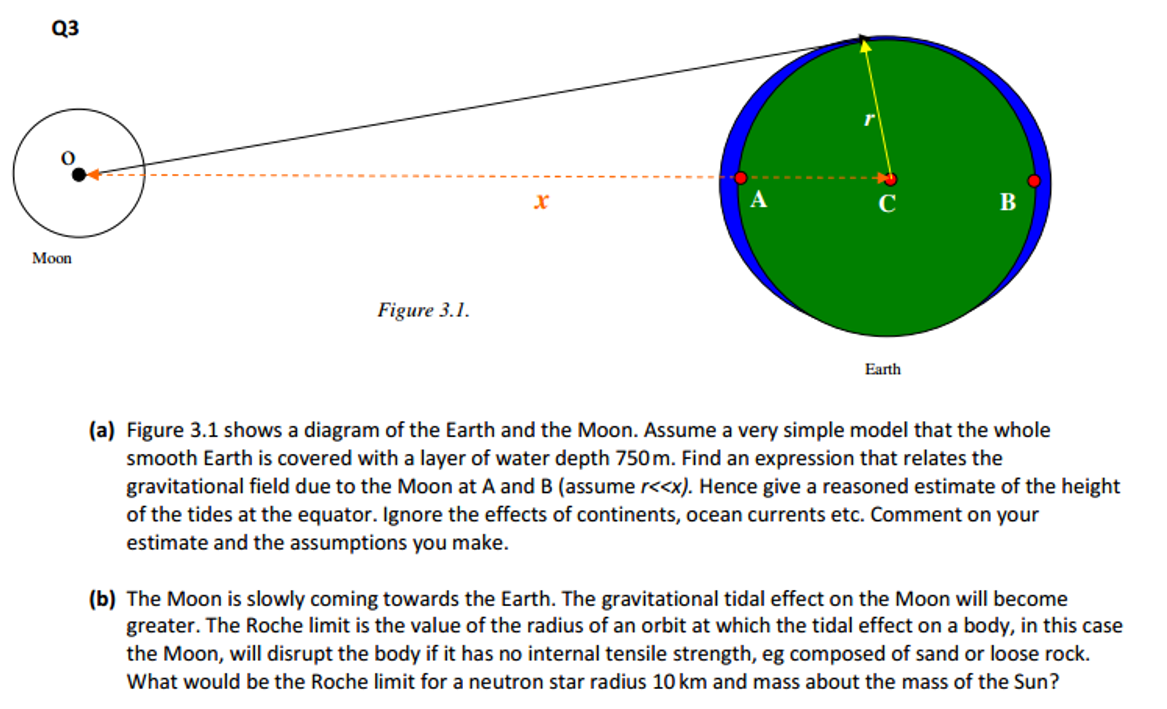 I have looked up differential gravity, but I cannot derive the equation for the effect on Earth, and I haven't found any good links for it. I have seen this question, but it doesn't seem to derive the forces on different parts of the Earth, or how the force variation affects the water. I initially tried to consider the component of the gravitational force of the Moon acting normally to the Earth's surface. This would be $F = F_0 \cos(\theta)$ where $\theta$ is the angle between a horizontal line going through $A$ and $B$ and the point on the Earth's surface in question. But now I am stuck. I wanted to deal with forces rather than equipotentials, as it seems like that is what the question wants because of the 'hence'...

How do I start with any method, be it equipotentials or forces?

How does the Moon cause the tides?

I'll start with an overly simplistic view of the tides. Suppose that the Moon was in a geosynchronous orbit and that the Earth was completely covered by water. In that case, the Earth's oceans would adjust themselves to form an equilibrium tide, first proposed by Newton, in which the surface of the oceans form an equipotential surface. The equilibrium tide is depicted below.

A number of things prevent that equilibrium tide from existing: The Moon is not in a geosynchronous orbit, the Earth is not completely covered by water, a month is much longer than is a day, and others. The equilibrium tide, aka the tidal bulges, does not exist. This means the Earth's oceans are perpetually in a state of disequilibrium with respect to the forces that generate the tides.

While this tide-generating force is very small, less than 10-6 newtons per kilogram of water, it is ever-present and acts in a coordinated manner over half of the globe, and in an opposite coordinated way over the other half of the globe. Tsunamis (sometimes erroneously called tidal waves) form an extreme example of an impulse response. Because the tide-generating force is ever-present, the tides are a forced response rather than an impulse response.

The tide-generating force at some point on the surface of the Earth is oscillatory over time, with multiple frequency components. The response of a resonant system to an oscillatory forcing function is to oscillate ate the frequency of that forcing function, but modified by the natural frequency of the resonant system. This results in a dynamic (as opposed to equilibrium) theory of the tides.

Laplace first proposed his dynamical theory of the tides 240 years ago. Variations in the tidal forcing, coupled with bathymetry and the Coriolis effect, results in a number of tidal resonance systems. Improvements to Laplace's dynamical theory of the tides in the latter part of the 19th century resulted in a very successful predictive of the tides. The tides can be predicted locally with remarkable success thanks to the late 19th / early 20th century works of George Darwin (Charles Darwin's son), Ernest William Brown, Arthur Thomas Doodson, A.E.H Love, and others.

That 100 year old theory is capable of predicting tides locally by observing the tides at that point over a span of time and performing harmonic analyses. A global point of view was out of reach to those late 19th / early 20th century scientists. Thanks to global observations and to modern computing, a global point of view is now becoming within reach.

Consider an arbitrary point P and a point close to it, let's say A.

note that this answer obtained was due to a difference in the distance from the moon of $a$. Per unit distance, this would in fact be $\frac{2GM}{r^3}$.

I am hoping I didn't give away too much. (and a quick tip: if in doubt, TAYLOR EXPAND!!)

Not the answer you're looking for? Browse other questions tagged homework-and-exercises newtonian-gravity earth moon tidal-effect or ask your own question.

211
Does Earth really have two high-tide bulges on opposite sides?
74
Moon's pull causes tides on far side of Earth: why?
58
Why is the Moon considered the major cause of tides, even though it is weaker than the Sun?
4
How gravitation affects tides
0
Is the tide on Earth caused by curvature of spacetime
0
Is it possible to apply Newton's equation of gravitation to attractive force between the moon and the ocean?
0
How does the sea level reach a fixed height?
1
Given that the Moon affects tides and most of the human body is water, do tides affect people?

1
Energy to reach the moon
1
What does this sentence mean?
12
Will Neil Armstrong's moon boot marks really last for thousands of years?
1
How much force would it take for you stop the Moon from crashing into the earth once it has started to fall?
1
What happens to the water on the surface of the Earth if the Earth is not rotating about its axis in the Earth-Moon system?
3
How the moon takes energy from Earth (if at all)?