I was recently reviewing geometric optics, during which I read about Huygens' Principle and how it could be used to prove the Law of Reflection from the "light is a wave" viewpoint. I'll quote what I read in the book for Huygens' Principle (from Serway and Beichner, Physics for Scientists and Engineers with Modern Physics, 5th Ed., Vol. 2, pg. 1119): "In Huygens' construction, all points on a given wave front are taken as point sources for the production of spherical secondary waves, called wavelets, which propagate outward through a medium with speeds characteristic of waves in that medium. After some time has elapsed, the new position of the wave front is the surface tangent to the wavelets." The authors go on to show that using this principle for a plane wave shows that at any later time a plane wave is still a plane wave. Likewise, Huygens' Principle can be used to show that a spherical wave front remains a spherical wavefront at any later time (again assuming the light is not interacting with any surface). (See, e.g., here for a couple of figures.) Next, the authors apply Huygens' Principle to prove the Law of Reflection. However, they don't actually draw the wavelets, so I tried it myself (and I failed the first couple of times).

What I've learned by thinking about this for a while boils down to this: to understand reflection via Huygens' Principle, the wavelets you are to use for drawing the tangent wave front must all originate during the reflection process (see Figure 1 below). This seems quite reasonable to me. If I want to know what happens after a reflection, I should use wavelets that form during reflection. However, one thing that feels strange to me is that these secondary wavelets are all formed at different times, and then I'm using information from all of them at the same time to draw a reflected wave front. If, during the reflection process, it's ok to use wavelets that form at different times, then when is it ever not ok to do that? For example, if I try the same trick (of drawing secondary wavelets that originate at different times and then using all of those wavelets at the same time to find a new wave front) with a plane wave, I seem to get a result that makes sense (see Figure 2 below), even though the way I'm using Huygens' Principle in this case does not make sense (I have to have knowledge of how a plane wave propagates to make Figure 2, but the point of Huygens' Principle is to show us how the wave propagates in the first place). 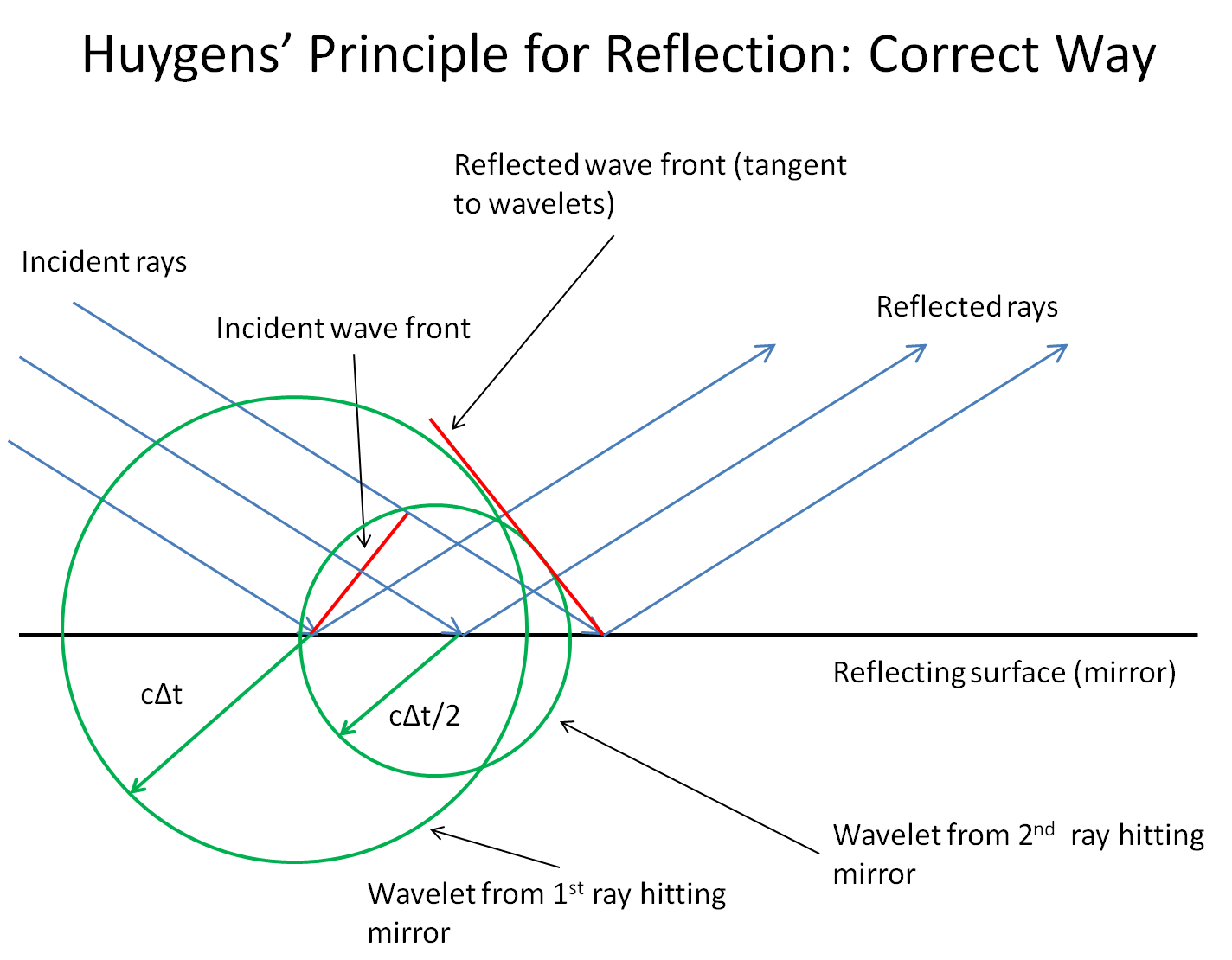 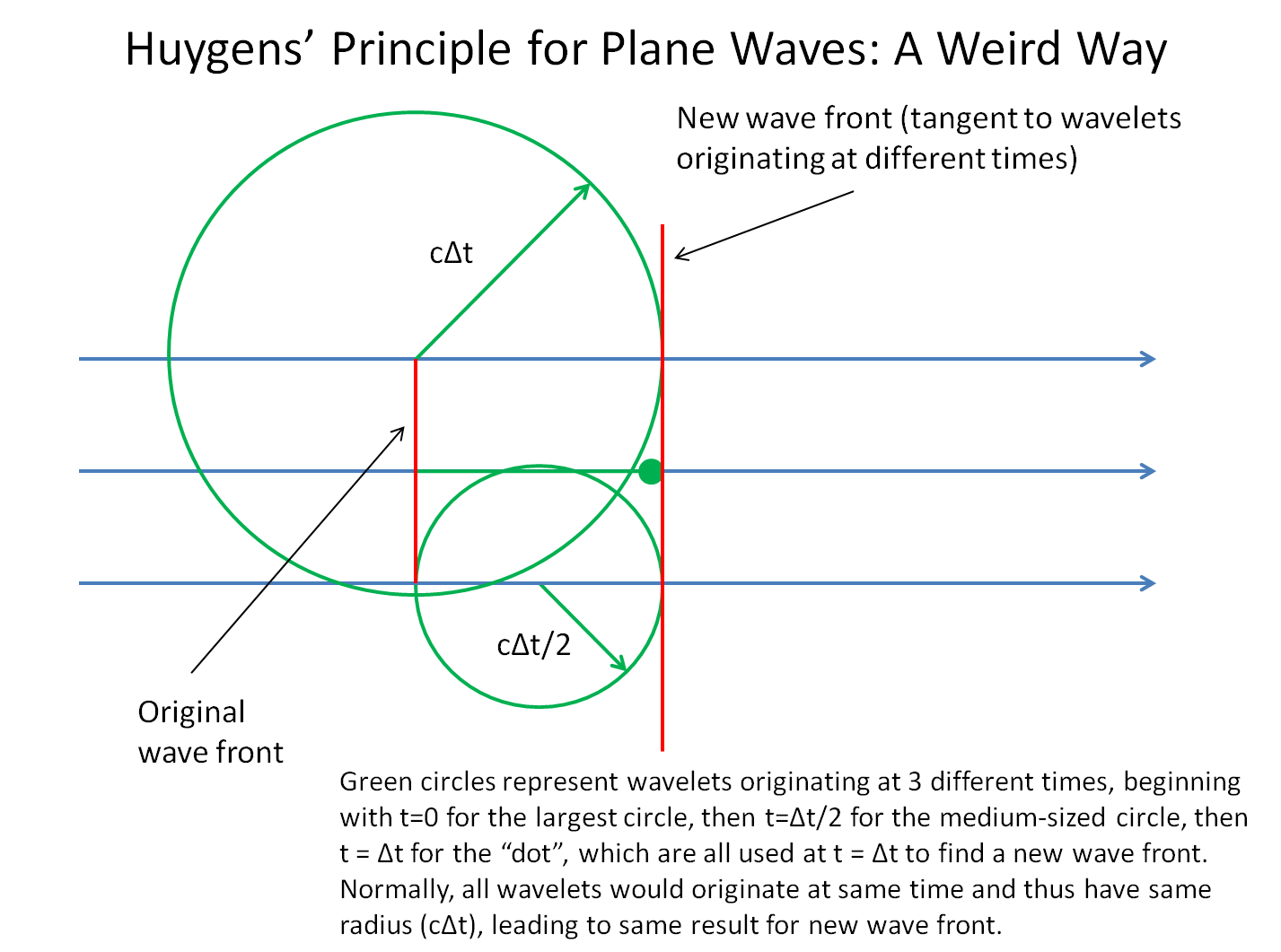 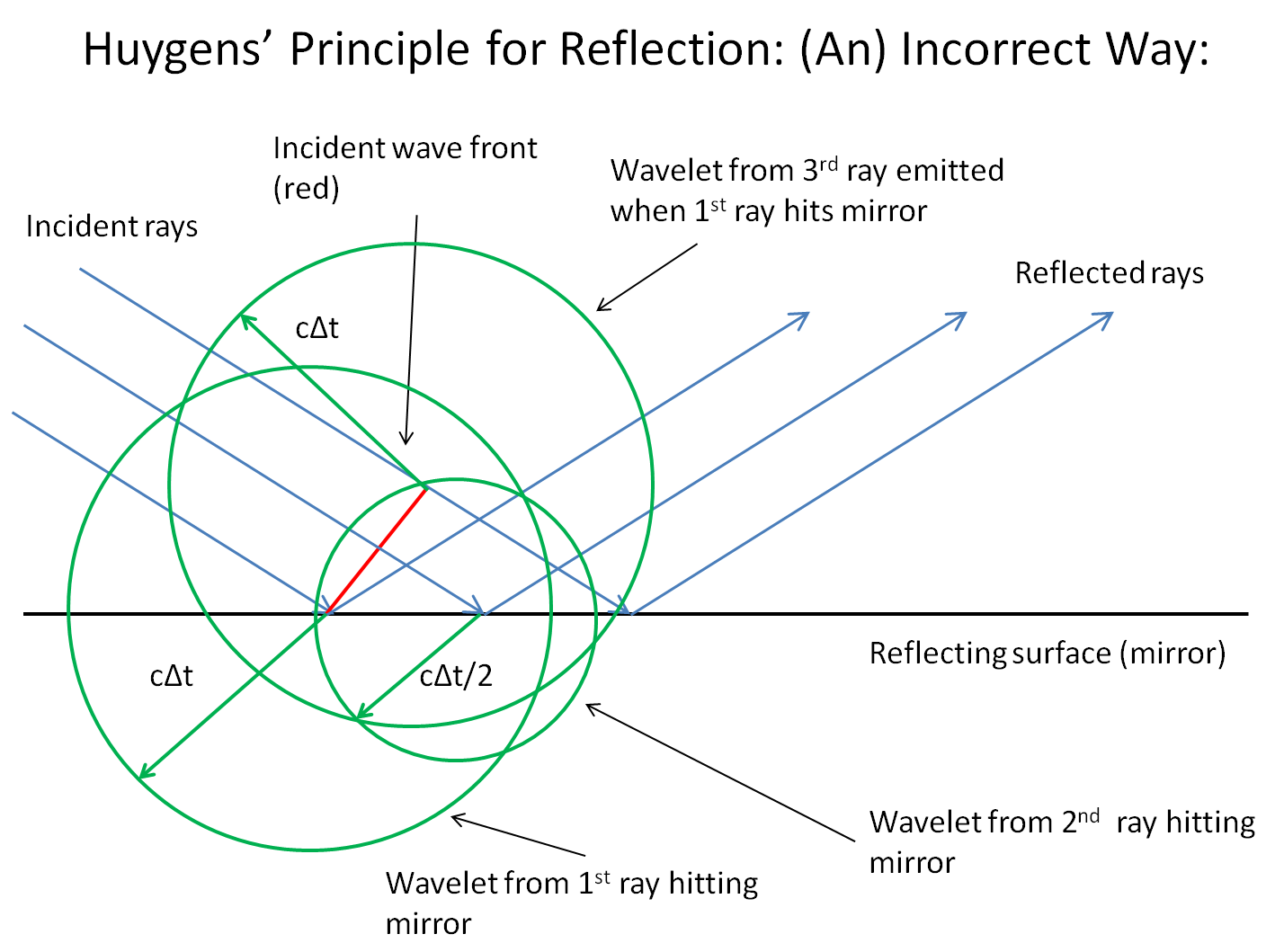 In the figure that you titled as "correct way", indeed everything is correct. You say that you have a problem, "these secondary wavelets are all formed at different times". Yes, the wavelets appear at different times, and this is why the reflected wave-front is inclined. Look at the picture below.

By the time the leftmost ray reaches the point $A$, on the wave-front (dark green) the other two rays are far from the reflecting surface, points $B$, respectively $C$.

By the time the point $B$ reaches the surface, point $B_1$, the surface of the wavelet formed around $A$ touches the point $A_1$.

Not the answer you're looking for? Browse other questions tagged optics waves reflection geometric-optics huygens-principle or ask your own question.