I have watched light sources such as incandescent lamps and other lamp sources; they have always made shadows. But a fluorescent lamp doesn't make any shadow. What is the reason behind the non-appearance of prominent shadow?

To complement Floris's answer, here's a quick animation showing how the shadow changes with the size of the light source. In this animation, I've forced the intensity of the light to vary inversely with the surface area, so the total power output is constant ($P \approx 62.83 \, \mathrm{W}$). This is why the object (Suzanne) doesn't appear to get any brighter or darker, but the shadow sharpness does change:

In this scene, the spherical lamp is the only light source, except for the dim ambient lighting. This makes the shadows very easily visible. In a real-world scenario with other light sources (windows, for example), the effect would be less pronounced because the shadows would be more washed out.

The following animation shows the scenario Floris described, with a rotating long object:

It does have a shadow - but it is very faint. When you have a point source of light, it casts a strong shadow (which is really an image of the object casting the shadow). As the source of light becomes larger ("extended" is the word) then you end up with a shadow that is made up of "lots of overlapping shadows" - which makes the edges seem blurry.

If you have a fluorescent tube, you can see that by holding a wide stick (maybe a cricket bat) parallel to the tube and close to the floor: now you will see a shadow as the tube is narrower in one direction. When you turn the bat 90°, so it is perpendicular to the tube, the shadow will be much less strong.

This picture shows how a small source makes a shadow - when you make the source larger, the edge will get "softer" until the shadow seems to disappear. Incidentally this is why you have frosted bulbs, lamp shades and reflectors: it is usually better for shadows to be softer (so you see everywhere and not just in the direct light). 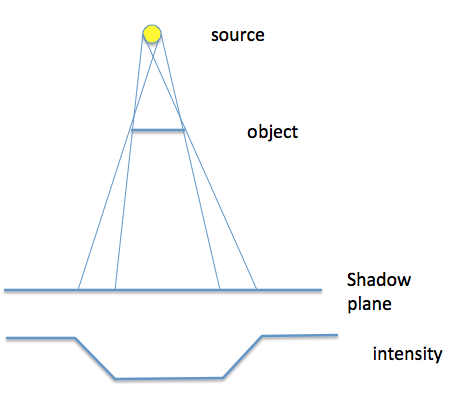 Not the answer you're looking for? Browse other questions tagged visible-light everyday-life or ask your own question.

41
Why does light act differently in miniatures?
4
How can shadows ever be sharp?

3
Can an invisible light source cast shadows?
1
Does frequently switching a compact fluorescent lamp on and off reduce its lifespan?
2
Why don't flying birds have shadows?
4
Can radiation light up a fluorescent light?
1
How two light sources with identaical illuminance can have different luminance?
2
Why are shadows sharp close to the object, but blurry farther?