The Solar System explosion in the Nice model

This video depicts one variant of the Nice model (pronounced "neese", like the city in France). I'll briefly describe it in case the link ever dies. Here is the initial configuration: 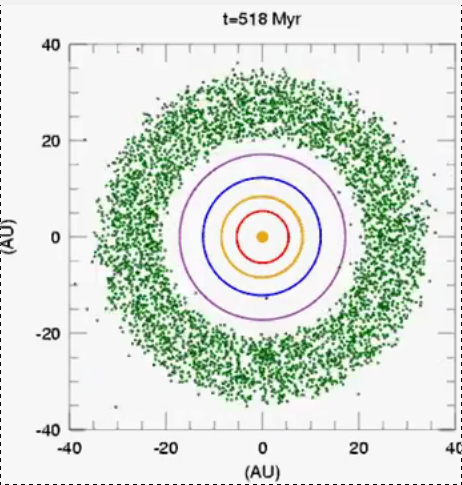 The four coloured circles indicate the orbits of the four Solar System (SS) gas giants, red for Jupiter, yellow for Saturn, blue for Neptune, purple for Uranus. The green dots represent a hypothesized disk of planetesimals. Initially, Neptune has an orbit smaller than Uranus. In the Nice model, the outer gas giants occasionally scatter small objects inward, and by conservation of $E$ and $L$, move outward. The inward-scattered objects then often scatter off of Jupiter and are ejected (or nearly so) from the SS, so Jupiter slowly migrates inward. Eventually Jupiter and Saturn cross their 2:1 mean-motion resonance, which pushes Saturn out into encounters with Uranus and Neptune, scattering the two outer giants into the planetesimals. The result of the system re-stabilizing is an explosive disruption of the planetesimals, and Neptune "switching places" with Uranus, giving this configuration at later times: 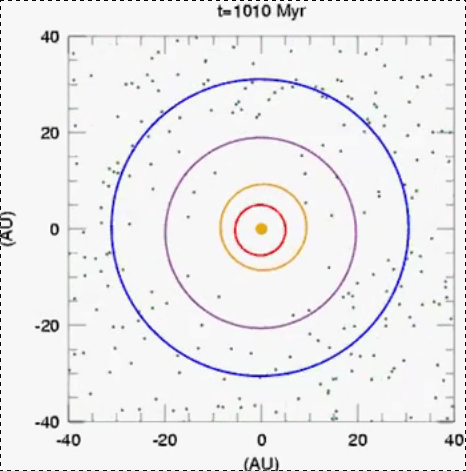 The whole model seems to hang together rather nicely (ahem, no pun intended), which is presumably why it's been fairly successful. My question is what prevents one of the two ice giants (Uranus, Neptune) from being ejected in that big shake-up. With their orbits swapping places, my intuition is nagging me that one of the orbits (probably Neptune's) shouldn't survive the process. Is there something that is forcing the two planets back to a stable configuration? Or is this just one lucky scenario, where more generically there's a substantial probability that one of the giants is ejected?

I had the same feeling as you when I watched the video again recently. It seemed like one of the ice giants would get ejected after coming too close to Jupiter. It turns out that there's a name for this: the jumping Jupiter scenario. Outside Wikipedia, it's described in Fassett & Minton (2013) (paywall!) and tangentially in Deienno & Nesvorny (2014). Without this kind of encounter, the result of the Nice Model would not be what we see today (e.g. Brasser et al. (2009)).

This is what is known to the experts as a big problem. In most- but not all - jumping Jupiter simulations, the ice giant is ejected. One proposed solution is the hypothetical 5th giant, developed by Nesvorny (2011). It involves a sort of sacrificial giant planet - possibly an ice giant - interacting with Jupiter and Saturn (as per the jumping Jupiter scenario) and then being ejected from the system.

Nesvorny also indicates that certain conditions must be met. For example, if the 5th planet is low-mass and forms further out than Neptune, Neptune will - as you predicted - be ejected, although some simulations threw out Uranus instead. A similar, though less dramatic, result arises when, instead of adding in a 5th planet, the mass of the disk in increased. Neptune moves way too far out, as you guessed. A low-mass disk and 5th planet of similar composition and mass to Uranus and Neptune stops these disasters.

In Nesvorny & Morbidelli (2012), it is noted that in some cases - most notably a case where Jupiter and Saturn share a 3:2 resonance and the inner ice giant (Neptune) share a 3:2 resonance, one or both of the ice giants are ejected from the system. Only one simulation didn't lead to that outcome - and that failed to reproduce the current conditions.

On the other hand, putting the ice giants in a 2:1 resonance solved the problem, or at least led to more stable orbits. The interesting thing with all of this is that the papers claim that a 3:2 resonance between Jupiter and Saturn is more likely, rather than the 2:1, as is often cited.

I can't tell what resonance the video uses, though it says it is based off of the model of Gomes, Levison, Tsiganis and Morbidelli (2005), which uses the 2:1 resonance. Morbidelli's collaboration with Nesvorny is much more recent, though, and says it is based off of newer work (besides their simulations). So it could be that the video is inaccurate (as of current models), and new fixes (3.g. the 5th giant or the 3:2/2:1 resonances) are needed.

Not the answer you're looking for? Browse other questions tagged astrophysics orbital-motion solar-system resonance or ask your own question.

11
What's the cause of this gap in this simulation of the Nice model?

11
What's the cause of this gap in this simulation of the Nice model?
10
Do we know what event caused the Sun and Solar System to form?
2
Planetary alignment of the gas giants?
1
Can a "Solar System"-type system exist without a star or stellar remnant?
2
What are the gravitational binding energies of giant planets?
1
Why didn't heavier elements settle at the core of the solar system?
1
How can the orbital motion of planets around the sun be calculated taking into account the force exerted by other planets?