The following passage is extracted from the book "Concepts of Physics, Part 1" by H C Verma:

Let us consider the situation shown in figure. An elevator cabin falls down after the cable breaks. The cabin and all the bodies fixed in the cabin are accelerated with respect to the earth and acceleration is about 9.8 $m/s^2$ in the downward direction. Consider the lamp in the cabin. The forces on the lamp are
the gravitational force W by earth and the electromagnetic force T (tension) of the rope. The direction of W is downward and the direction of T is upward. The sum is (W-T) downward. Measure the acceleration of the lamp from the frame of reference of the cabin. The lamp is at rest. The acceleration of the lamp is zero. The person A who measured this acceleration is a learned one and uses Newton's first law to conclude that the sum of the forces acting on the particle is zero, i.e, W-T=0 or, W=T. 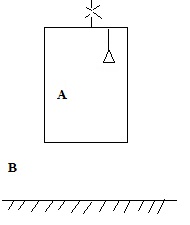 The forces acting on the lamp as seen by B are tension (T) due to string, and gravitational force (W), which gets cancelled. I think there is another force (or acceleration) acting on the lamp (and all other bodies in the cabin), i.e due to acceleration of the cabin itself. So, thread and lamp gets accelerated at the same rate and the tension cancels with W. There seems to be no problem here.

But if we consider what textbook says, i.e with no force due to cabin motion itself and W to be not equal to T, as there are no other force acting, lamp should fall down. But this is not the case, the cabin's thread breaks but not of lamp's.

I am failing to see the mistake, are the textbook statements (in relation with my argument) correct?

I'm quite sure that there's something wrong with the sentence "The person $A$ who measured this acceleration is a learned one and uses Newton's first law to..." in that book. The usage of Newton's first law (in fact all three) is restricted; it can only be used in an inertial reference frame. If you must,an inertial force shoud be added. If the reference you choose has an acceleration of $a$, then an inertial force $F = -m.a$ ('$-$'means the force is on the opposite direction of $a$,'$m$' being the mass of the object) should be acting on each object. For the case in your book,inertia force is $F = -mg = -W$ downward,so $$W - T - W = 0 \implies T = 0$$. I think your book is alerting readers by showing a 'classical mistake'.

Observer $A$ & Lamp have the same acceleration; they are in a non-inertial reference frame.

This makes intuitive sense if you imagine replacing the thread with a spring: when the lift cable is cut and the lift starts to fall, the tension in the spring will pull the lamp up and cause it to bounce around. The only way this can not happen (and so for the lamp to hang stationary with respect to the lift) is if there is somehow no tension in the spring to start with.

Well, of course the real answer is that the people in the elevator would have no time to measure the acceleration of the lamp or the tension on the rope before the elevator hit the bottom of the shaft and they were all killed, so the question is completely moot. :-)

Suppose that the people in the elevator -- in between screaming and crying -- cut the rope. Would the lamp then fall to the floor? No, because the elevator is accelerating at the same rate as the lamp, so from the point of view of people in the elevator, the lamp would continue to float motionless in the air. Thus, one could easily prove that the tension on the rope is zero by cutting the rope. Or put another way, you could test whether the rope is or is not what is holding the lamp in place by cutting the rope and observing what happens.

Just because something is attached to a rope, one can't jump to the conclusion that the rope is what is holding it in place. If I see a lamp lying on the floor with a rope attached to it, I don't assume that what is preventing the lamp from flying to the far end of the room, or to the ceiling, is tension on the rope!

Consider a spherical cow, in vacuum....

Why? All objects in the lift are pulled downward at g. But the lift cannot freefall at g - the shaft exerts considerable air resistance, the guides and rollers add a bit more (we assume for this exercise the brake has been disabled).

Person A will experience greatly reduced gravity - a small jump may result in them hitting the ceiling of the lift. But they will fall back to the floor. The lamp will appear to rise - this is the tension in the (slightly) elastic rope being released. It will go back down again.

How much residual gravity we have will be nearly impossible to calculate, but 0.1-0.3 g would be reasonable.

Person B will of course see none of this, on account of being on the outside of a rapidly descending steel box.

If this is the Burj Dubai's express lift you just might have time for all these forces to stabilize before person A, the lamp, and the lift come to a messy end in the basement. Text your answer from your phone.

Oh no, not again.

1
Accelerating an elevator
2
How can an object with zero acceleration move?
1
Tension in a string moving in elevator
0
What does an acceleration greater than $g$ feel like?
0
Mechanics: objects in contact
0
Elevator forces
0
An elevator moving with constant velocity
0
Why is the center of mass of this system moving?