Can a liquid boil in a closed container?

The title says it all. When one fills a container (with water for example) and closes it so no air can escape from it, then heats the container continuously, can the liquid boil or completely evaporate?

Yes, it will boil. Effectively, you will be heating it at constant volume. I'll try to explain what happens to the liquid (I'll assume water) as it boils. This image below shows the p-V-T (pressure, volume, temperature) phase diagram for water, which is a complex 3D surface:

We can project this surface downwards to create a 2D representation of this called the T-V diagram (the image above shows similar projections on the left and right for p-V and p-T): 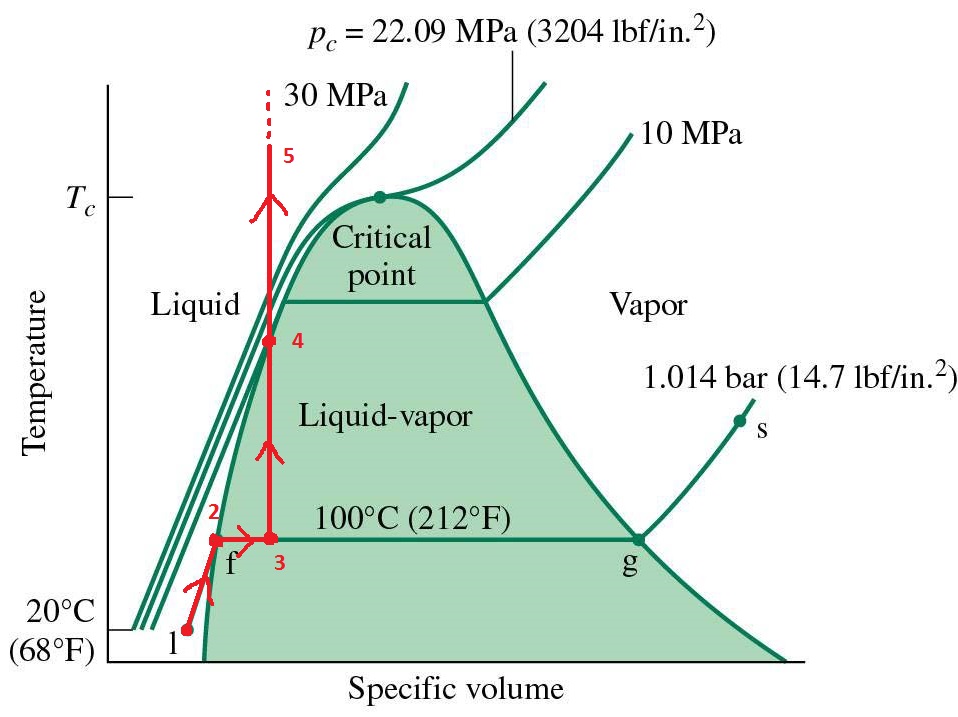 This will help us to visualize what happens on the water phase diagram as it heats at constant volume.

We start at point 1, where we have water sitting in the container at atmospheric temperature, pressure and density. As we add heat, the state will follow a constant pressure line to point 2. At point 2, the water will start boiling. The temperature will stay constant as the heat energy added is going into latent heat for the state change. Once we get to point 3, the portion of the container that didn't initially contain water is now full of steam and it can't expand any more, as it is constrained by the container. From here, the state will follow a vertical, constant-density line - it will gain temperature and pressure as heat is added, but the density won't change. At point 4, the pressure has increased to the point where the steam will all turn back into liquid water - it's now obviously hotter than before and it's expanded to fill the container. Beyond point 4, the water will continue to increase in temperature and pressure and, once we exceed the critical point, we will have supercritical steam, which is neither liquid or gas, but has some properties of both.

i would assume if you were to have a container that can not burst and it's filled all the way to the top it would say a liquid as it can not expand altho the pressure would go up and the liquid would heat up but i do not know for sure but i'm confident that's what would happen. -Davis.A

1
Could I boil water by spinning it in a highly insulated container?
1
Thermodynamics at the stoves, cooking problem

4
Why can't I evaporate water without wind, just heat? (not boiling,evaporating!) Or can I?
3
Behavior of water at temperatures above 100°C
3
The thermodynamics of heating water in a rigid container
2
Boilling a liquid in a closed container, less heat required?
0
Boiling/condensing water in closed, expandable system
3
Will water in a vacuum evaporate continously?
1
Water boiling in closed container