How to interpret spin observables constructed by non-standard phase choices?

If we try to find matrix elements of ladder operators ( $J_{\pm}$) for spin when they act on eigenstates of $J^2$ and $J_z$ ( $\newcommand{ket}[1]{\left|#1\right\rangle} \newcommand{avg}[1]{\left\langle#1\right\rangle} \ket{\ j,m}$ ), as for example A.R. Edmonds: Angular Momentum in Quantum Mechanics, or Auletta: Quantum Mechanics, or any other textbook which deals with this issue, we come to a point where we find that:

Normally, we set $\phi=0$ for all choices of m for a fixed j. Now, the standard explanation for this is that the choice of phase is arbitrary but must be followed consistently (e.g. Edmonds or Condon, Shortley).

I would like to point out some issues with this explanations and then show what happens if we try to play with the phase choice. The most important point will be that we will allow the choice of a different phase $\phi=\phi(m)$ for different m's as opposed to choice of same phase for every m (the special case of which is the standard choice of $\phi=0$ for all m's). This idea comes from the fact that there is no (at least obvious) reason to claim that it follows from the standard derivation of matrix elements of ladder operators that the phases must be the same for all m's.

We will look at the example of spin=1 matrices. The standard choice of $\phi=0$ for all matrix elements yields the following matrices of ladder operators and then the observables of spin in z,x and y direction:

Now, to make things clear, I should point out that the new $j_x$ and $j_y$ have the same eigenvalues as the standard ones, and satisfy the same old algebra of angular momentum, though their eigenstates are different. As a result, the expected values of these different observables are different in some superpositions of $\ket{1,m}$, which is interesting, since that is what we observe in experiments. 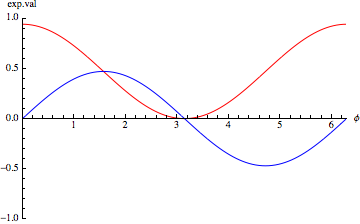 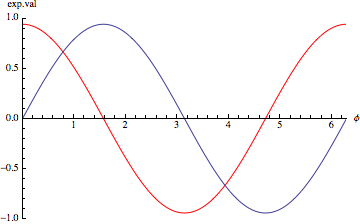 One interesting point is that the observables we construct by choosing different phases for different matrix elements of ladder operators, i.e. $\phi(0) \neq \phi(-1)$, can't be written as linear combination of the standard operators (even with complex coefficients).

Another interesting thing to note is that these different observables arise only for spin>=1, since for spin=1/2 only one matrix element of ladder operators is different from 0.

My question is, does anyone know of an interpretation of these "$j_x$" and "$j_y$" we construct by different phase choices? Further on, does anyone know of an argument I am not aware of, for choosing the same phase for every matrix element as opposed to my choice of different phases (to me it seems that the standard choice is just a special case of a more general choice, but I don't yet understand how to interpret the results)?

There must be an error in the way you calculate the expectation values.

The fact that your transformed operators have the same spectrum of eigenvalues and the same algebra comes from the fact that redefinitions of the phase lead to unitarily equivalent operators, i.e. they are related by $$\tilde j_+ = U^\dagger j_+ U,\quad \tilde j_- = U^\dagger j_- U,\quad \tilde j_z = U^\dagger j_z U$$ with a unitary matrix $U$ and the states in the two bases (different phase choices) are related by $$\langle \tilde \phi \vert = \langle \phi \vert U, \qquad \vert \tilde \phi \rangle = U^\dagger \vert \phi \rangle.$$ Since $j_z$ and $j_\pm$ span the entire angular momentum algebra, any operator leaving the angular momentum $\vec J^2$ invariant can be written as combination of $j_z$ and $j_\pm$. Since any product of these will transform by getting a $U^\dagger$ on the left and a $U$ on the right, we have $$ \tilde O = U^\dagger O U.$$

Now since you find a difference between different conventions there should be a detail you overlooked. Did you remember that if the state $\vert 1, -1\rangle$ gets a phase $\phi$, the state $\langle 1, -1 \vert$ gets the phase $-\phi$?

Not the answer you're looking for? Browse other questions tagged quantum-mechanics angular-momentum quantum-spin group-theory or ask your own question.