Ampere's law of circular path when “bulging” out 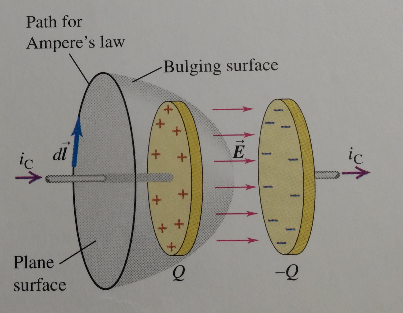 The picture shows a use of Ampere's law. A circular path is chosen.

When using Ampere's law we are talking about the current enclosed. That means, the current through the surface enclosed by the path.

The text to the picture says:

For the plane circular area bounded by the circle, $I_{encl}$ is just the current $i_C$ in the left conductor. But the surface that bulges out to the right is bounded by the same circle, and the current through that surface is zero. So $\oint \vec B \bullet \mathrm{d} \vec l$ is equal to $\mu_0 I_{encl}$, and at the same time it is equal to zero! This is a clear contradiction.

(The topic is displacement current.)

I am confused of why they can simply let the area (the plane surface enclosed) bulge out like this. This means that the total current through any surfaces bounded by the same path must always be the same.

In the derivation earlier in the book of Ampere's law, only a plane surface was considered. What is the explanation that Ampere's law still applies when finding the line integral, nomatter the enclosed surface's shape in space?

electromagnetism electric-current
Share
Improve this question
edited May 14 '15 at 3:55

Your book is absolutely correct. The root reason behind this is Stokes's theorem.

Hence the integral of the LHS of Ampere's law in differential form over a surface is equal to the closed line integral of the B-field around a loop that bounds that surface. Integrating the RHS over the same area gives you the current flowing through it.

The way it can be (sort) of proved is to imagine a little square. You can evaluate the line integral around this square as the sum of 4 separate integrals. It is easy to show that the integral of the curl of the B-field over the surface of the square is equal to sum of the 4 separate line integrals:

The next step is then to argue (i) that we could have done this with small squares in any plane. (ii) We can make up any surface by adding together lots of infinitesimally small squares. In that case what will happen is that the line integral terms of the sides that adjacent squares have in common will be opposed to each other and will cancel. The only line integral terms that remain will be those which bound the entire surface. 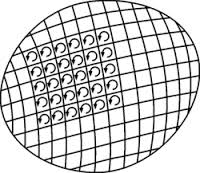 The explanation of this is enclosed in Stoke's theorem. In the most general formulation, Stokes theorem asserts that $$\oint_{\partial\Omega}\alpha = \int_\Omega\text d\alpha$$ where $\partial\Omega$ is the boundary of the cycle $\Omega$ and $\text d\alpha$ is the exterior derivative of the form $\alpha$.

In the case of electromagnetism this specialises to $$\oint_{\partial S} \mathbf B\cdot\text d\mathbf l = \int_S\nabla\times\mathbf B\cdot\hat{\mathbf n}\ \text dS,$$ where $S$ is any surface with boundary and $\partial S$ is its boundary, which is a closed path. Now by Maxwell's equations, $\nabla\times\mathbf B = \mathbf J$, and the RHS then becomes the total current flowing across $S$.

1
Ampere's circuital law
0
Ampere's law and Stokes' Theorem for current density
5
Current geometry and Ampere's law
1
Reason behind the inclusion and exclusion of current sources while using Ampere's law for the total magnetic field and total current
0
What type of integrals are these?
0
A different answer with Ampere's Law
7
Ampere's Law: Any surface? But what about these? There must be some requirements right?