Why doesn't a glass french press shatter when boiling water is poured in?

When I was little, I accidentally shattered a glass cooking instrument due to applying far too drastic a temperature change to it. Since then, I've been a bit afraid of doing it again. Of late, I've been using a french press to make coffee; one that happens to be made of glass. Since I am now pouring almost boiling water into a room temperature glass object, I'm a bit worried it will shatter. Double so since if it does, I could have almost boiling water flowing from my desk to my lap.

After dozens of uses, there hasn't been a problem. And if there would've been one, I don't think they would have been allowed to sale it. But I'm still concerned about how cold it can still be used at. For example, if I leave it in my car on a cold night and bring it into the office, can it be used straight away?

So why doesn't it shatter and how cold can it be before I need to worry?

Demensions: roughly 20cm tall with a diameter of 10cm, if that is of any relevance.

Material: Glass, I assume a special kind that is better able to handle heat, but I don't kow the details.

As PMPJohn mentioned, it's probably made of Pyrex (a borosilicate glass). This material has about 1/3 the thermal expansion of conventional glass, so thermal stresses are much lower and it can easily accommodate the kinds of thermal shock you describe.

Interestingly, glass made today in the US under the Pyrex name is actually no longer borosilicate glass, but is instead tempered conventional glass. It appears to be less resistant to thermal shock than borosilicate glass. In Europe, a similar brand-name is Duran, which still is borosilicate.

Anyway, you know that glass is quite fragile under some circumstances, e.g., mechanical stress (bending) and high temperature gradient (which is the main culprit in a french press scenario), which means a portion of the glass is heated up more than another, causing it to epand and thus exercising mechanical stress, which can lead to shattering. That's called thermal shock.

As the wiki article states, you can extend the resistance to thermal shock in several ways, the most obvious being to use stronger/thicker glass, and heating it up slowly and evenly.

My guess is that your french press has quite thick glass compared to, say, a drinking glass, and is also probably made from a special heat-resistant glass that either spreads heat more evenly or is more durable due to some additive (Pyrex glass seems to have added Borone).

If you want to be safe I'd advise to not use the hot, bubbling water right away, but rather let it cool a few centigrades (for maybe 15-30 seconds) before pouring it into your press. Additionally, you maybe shouldn't drop the hot press into ice cold water right away (and vice versa, which is the "press out of cold car"-situation you mentioned. Just heat it to room temperature first with lukewarm water). But you're right, if the glass the press is made out of wasn't relatively safe, I'd wouldn't be allowed for sale.

Actually, they can shatter from just the hot water. Happened to me this morning. Poured the boiling water in, turned to get the plunger and it just gushed hot water on my sweat pants and socks. I pulled my clothes away from me, but my left foot got burned some. I'm not sure how bad, it's only been 10 minutes. 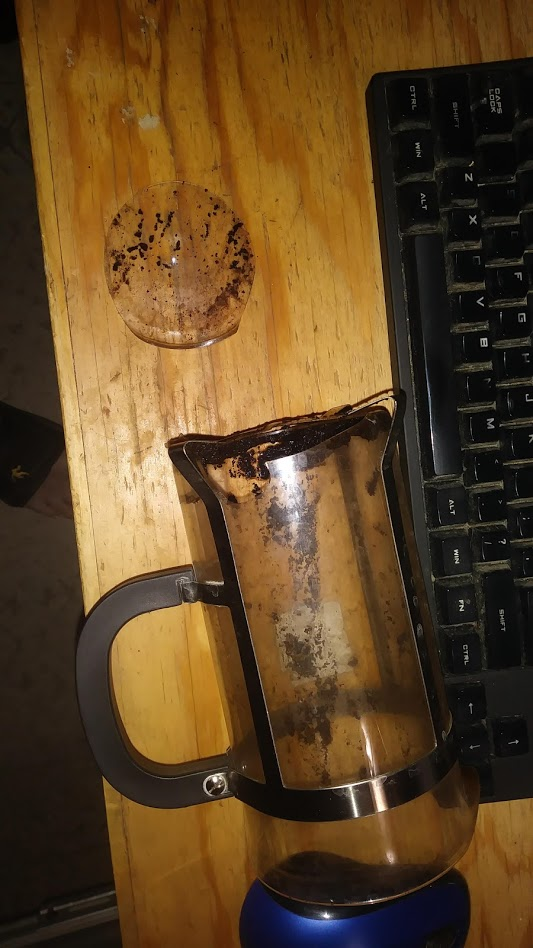 Not the answer you're looking for? Browse other questions tagged thermodynamics soft-question everyday-life or ask your own question.

10
What pressure or tension occurs in a glass jar when I pour boiling water inside?
0
Why can a thermos flask break when washed in cold water?

32
Why is there more steam after a pot of water *stops* boiling?
3
Boiling when I plunge my french press?
25
Why is boiling water the second time more quiet than boiling it the first time?
10
What pressure or tension occurs in a glass jar when I pour boiling water inside?
3
Why doesn't spaghetti knot when stirred?
31
Why does temperature remain constant when water is boiling?
3
In any glass, why doesn't its shadow show when near a screen?
83
Why doesn't water actually perfectly wet glass?
1
What causes this phenomenon when boiling water?