As a car turns around a circle, why does the force of static friction point towards the center of the circle [duplicate]

Ask Question
Asked 5 years, 6 months ago
Active 3 years ago
Viewed 24k times
2
$\begingroup$
This question already has answers here:
Why does friction play the role of centripetal force during the turning of a car? (3 answers)
Closed 5 years ago.

A car moves along a flat, circular road. It has a tangential velocity to the road, but the car tires change direction and the car experiences a force of static friction causing a centripetal acceleration towards the center of the circle. Why does the force push it perpendicular to the direction of the velocity?

Why does the force push it perpendicular to the direction of the velocity?

This is the most intuitive explanation I can think of:

When turning the wheels, the car still wants to continue straight ahead. Because of the inertia, the car is not just stopped but wants to go on forward (the effect is known as the centrifugal effect.)

When you turn the wheels, so they don't follow the motion perfectly anymore, they should slide over the asphalt as the car continues forward. You have then caused a velocity-component perpendicular to the wheels, in which direction they can't turn - they can only slide.

But the car doesn't start sliding and burning your Goodyear rubber tires (it doesn't continue forward without change). Static friction will prevent that. That static friction is pulling in the wheel to oppose that slide (preventing any perpendicular velocity-component) to prevent the car from slipping and sliding.

Be reminded that friction is always something that tries to prevent a motion. It will always act the exact opposite way as the motion/velocity it is trying to stop - in this case, exactly opposite to the perpendicular velocity-component of the wheel.
This introduced static friction will always be perpendicularly to the wheels direction. Any parallel component of this force would have been in the direction of the wheels rotation, and so wouldn't stop or change the motion (but just keeps the wheels rotating).

And acceleration always happens in the direction of the (net) force, $\vec F=m \vec a$.

This is why; the intuitive way.

If it's not accelerating in the direction of (forward travel), then it's engine force exactly equals the frictional and aerodynamic losses (constant velocity).

For a given velocity, the forces the tires must exert on the car to keep it in a circle increase to prevent it from 'escaping', and can be visualized by a vector pointing away from the center of the car (the imaginary/'apparent', but sometimes convenient, 'centrifugal' force).

This must be countered by a force 'pulling' the car to the center, centripetal force.

I drew you a picture: 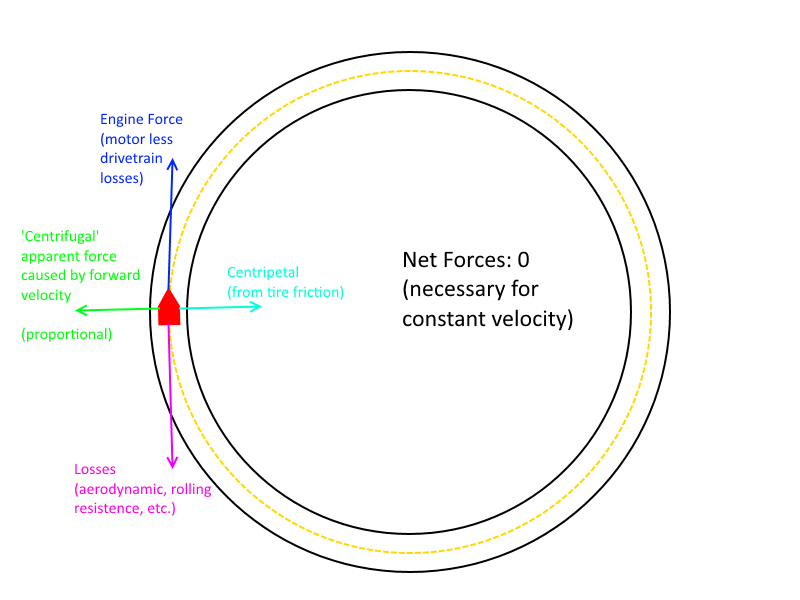 Basically, the key to note here is that the net forces MUST all cancel to zero in all planes, or it's not at a constant velocity. If the front/back forces were unequal in magnitude the car would slow down or speed up in forward velocity; if the tires could not provide the centripetal force to resist flinging out from the circle the car would travel in a straight line or ellipse-style thing depending on the steering wheel, and if they provided additional centripetal force the car would travel in an ellipse style thing starting into the center of the round track.

Note that it's a common practice in certain styles of racing, like F1 cars, to increase aerodynamic drag and use it to push the car harder to the pavement, thereby using some of the stored velocity (force provided from the engine) to increase the coefficient of friction between the tires and the road thus allowing for more centripetal force than gravity would otherwise provide. This makes for interesting scenarios in which some corners can only be taken up to ~50 MPH where aerodynamic forces aren't high enough, but then navigated again at 90-120 MPH (as a loose example) where the added downforce allows the tires to exert more centripetal force on the car.

Anything that tries to go around in a circle, is acted upon by a radial force, which we call the Centrifugal force. This force, being perpendicular to the objects's (here, its your car) velocity, acts in the outward (radial) direction.

Another way to think about this:

If the situation is completely friction-less, you can tie a rope to the C.O.M of your car (I don't know how) and loop it up on a pole at the center of the circle you wanna go around. This will also provide the necessary centripetal force to compensate the centrifugal force, and here the centripetal force must be tension in the rope.

Newton's first law indicates that the car would travel straight ahead unless a force acted on it. When the car turns, there must be a force pointing inwards. The only location for the force to be generated, is from the tires in contact with the ground.

I don't know why static friction gets the credit for turning the car.

Not the answer you're looking for? Browse other questions tagged newtonian-mechanics friction rotation centrifugal-force or ask your own question.

8
Why does friction play the role of centripetal force during the turning of a car?