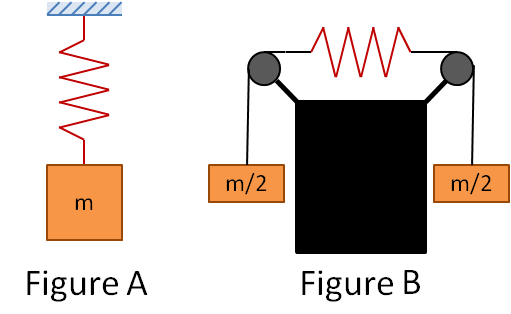 Think on the equilibrium position:

I suspect the confusion arises because in figure A it's tempting to ignore the upper end of the spring i.e. the joint where the upper end of the spring is attached. However the joint must be exerting an upwards force on the spring of $mg$ to balance out the downwards force of $mg$ exerted by the mass $m$. So in effect the spring has two blocks of mass $m$, one at each end, with one mass pulling down and the other pulling up. Now compare to figure B, which has a mass of $m/2$ at each end, and it should be obvious why the extension is only half as great in B.

The easiest way for me to understand this is as follows:

Consider a "free body diagram" of each spring alone.

In case one, a force $M*G$ pulls down on the spring. An equal and opposite force pulls up on the spring at the ceiling to satisfy the spring's equilibrium (it's not accelerating). Therefore, the force everywhere within the spring is $M*G$. Because of this we end up with $M*G=k*X$.

3
What should the scale show?
1
Tension in string due to two opposite forces
0
If two charged bodies are connected by a string will the tension be F or 2F?(F is the force of repulsion between them)
-1
Spring balance: what will be the reading?
0
Forces in a rope (tension)
0
Why is the tension force equal to the applied force when someone is lifting themself with a pulley?
25
Why I think tension should be twice the force in a tug of war
4
Tension in a massless string being pulled at its ends with unequal forces
1
Tension in string of two pulleys suspending two masses
0
Trying to understand the tension in a spring with two weights attached
See more linked questions

20
Is there a deep reason why springs combine like capacitors?
10
What will be different if the spring is not massless?
1
Doing a spring experiment, and need to find the stretch required
0
Relation between the initial stretch of a vertical spring due to weight and additional stretch
0
What will happen if I just stretch a spring and release it?
1
Spring mass damper system: Distance from equilibrium after applying velocity to mass
0
Change in Length of an element of spring