In other words, what's the maximum size of a Quantum denizen upto which it shows Quantum behaviors? How big do I need to create a molecule (or, collection of molecules) so that Feynman's multiple path and multiple history would no longer be applicable to it? In a sense, Feynman's multiple path and multiple history should be applicable to macroscopic system producing Quantum Decoherence, but I am talking about a molecule which could show interference with Multi-slit Diffraction Experiments.

It is very difficult to say where is the boundary in dimension of objects, between the classical and quantum behavior. The surprising fact is that we are not even sure if the boundary stands in the dimensions of the objects. And it is not exactly true that "you can apply Quantum Mechanics to macroscopic systems, but the effects are negligible and thus experimentally undetectable with current technology".

The main problem in obtaining interference with big objects is that their wavelengths are terribly small. If the object is by orders of magnitude bigger than its wavelength we won't see interference.

Until now one didn't obtain interference fringes with objects as big as pieces of chalk or pebbles, but yes we obtained with very big and complicated molecules as tetra-phenyl-porphyrin, which is a biomolecule, and fluorofullerenes. In these experiments the major idea was to get for the molecules, very, very small velocities, s.t. the wavelength be sufficiently big. The experiments were done not with two slits, but with gratings (repeated slits).

IMPORTANT NOTE: The issue of the limit between the quantum world and the macroscopic world, is under current intense investigation, see in the arXiv quant-ph the articles and experiment reports of Prof. Marcus Arndt. 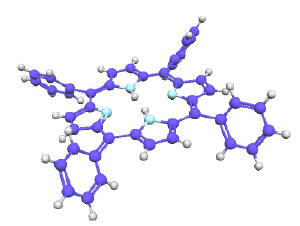 Theoretically speaking, you can apply Quantum Mechanics to macroscopic systems, but the effects are negligible and thus experimentally undetectable with current technology. General Relativity also applies to small systems, but the results are so close to Newtonian gravitational theory that the discrepancies are experimentally undetectable with current technology. An overlapping zone where both Quantum Mechanics and General Theory of Relativity can be applied because they are significant is in a black hole and during the beginning of the big bang, because the gravitational effects are huge and because the space is small quantum effects become significant.

Not the answer you're looking for? Browse other questions tagged quantum-mechanics quantum-field-theory or ask your own question.