Curvature of spacetime as a real thing?

"Theoretical physics is a branch of physics which employs mathematical models and abstractions of physical objects and systems to rationalize, explain and predict natural phenomena. This is in contrast to experimental physics, which uses experimental tools to probe these phenomena."

Obviously since Einstein was in fact a theoretical physicist, that is what he did.

There are different groups of individuals who believe spacetime is a substance that exists independently of the mass-energy within it, the other group thinks spacetime is defined through spatiotemporal relations between matter in the universe. Simply put, whatever the "fabric" of spacetime truly is, is a mystery, but it exists nonetheless as something and curves/bends in the presence of mass-energy and momentum. 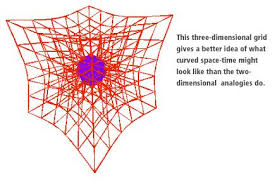 This is going to be more philosophy than physics, but I feel it might shed some light on the discussion.

Philosophy gave us our original ideas of time and space. The conceptual framework of Newtonian physics - itself based upon Descartes' unification of Euclidean geometry and algebra - makes use of these two foundational metaphysical ideas.

We may think of those concepts are "intuitive" but don't forget that our everyday languages embed such metaphysical notions and subliminally condition us to swallow these [now proven wrong] concepts of time and space. Hopi is an example of language that doesn't have the same "metaphysical" assumptions of time vs. space that we do. ( http://en.wikipedia.org/wiki/Hopi_time_controversy )

Now... on to Einstein et al... the reason we consider him a genius is that he discovered that those eminently reasonable - on the surface - metaphysical assumptions of "time" and "space" actually FAIL to hold when you think deeply and subtly enough. Einstein saw that the emperor wasn't wearing any clothes.

However, Einstein did not come up with a more intuitive metaphysical concept to replace those broken ideas of "time" and "space". Instead, he glued time and space together using hairy - for the lay person - mathematical constructs.

Most of today's physicists, while they have no problem dealing with "spacetime" in their equations, are STILL generally held hostage to the bogus /metaphysical/ ideas of linear time and three-dimensional space (and most "educated" laypeople even more so). I believe they fail to underestimate just how much their use of language affects their perception.

To think more clearly about it, we have to realize that:

1) "time" that does not "flow uniformly" SHOULD NOT BE CALLED TIME at all!

2) "space" that "warps" SHOULD NOT BE CALLED SPACE because it isn't, not in the original sense!

Paradoxes, it seems, are an indication of the use of broken language/concepts. So these "paradoxes" we have in physics such as retrocausality, etc... are the result of insistence on clinging on to broken metaphysical concepts. And we cling to those because /we don't have anything better yet/.

Before Copernicus, Ptolemaic astronomers used the elaborate mathematical model of epicycles to describe the movements of heavenly bodies. It worked to a certain extent, just like our physics theories today, but epicycles were unwieldy and cumbersome.

The math became vastly more simplified once they threw out the one bogus axiom: that the Earth was at the center. Most likely, as Planck says, these older astronomers had to die out first.

My radical suggestion is that even today's leading-edge physicists - despite what the math keeps showing them - still refuse to throw away certain bogus axioms, and is what gives rise to all the complexity of our physics theories today ( http://amzn.to/1IBVk6M ). These bogus axiomatic beliefs are that:

1) There is a "past" and a "future". E.g. A Feynman diagram achieves its symbolic elegance from doing away with those two ideas.

It may sound like we are venturing into crackpot territory here by suggesting the elimination of those two ideas, but realize that Copernicus was definitely considered a crackpot in his time:

400 B.C. - Zeno's paradox calls into question the validity of the idea of space/distance

... and yet we still buy into the notions of "distance", "location", "past", "present" ? One day, belief in those ideas will be regarded as having the same naivete as the belief that the earth is at the center of the universe or Aristotle's ideas of "natural place" and "natural motion".

Not the answer you're looking for? Browse other questions tagged general-relativity spacetime curvature aether or ask your own question.

30
Does the curvature of spacetime theory assume gravity?
11
Misused physics analogies
1
Bowling ball on a rubber sheet analogy - what pulls the ball down
1
If the universe is 3D, how is space-time like a “fabric”?

32
Is String Theory formulated in flat or curved spacetime?
5
Is the curvature of spacetime invariant? Could it be characterized as the ether?
1
Space-time curvature VS light diffraction