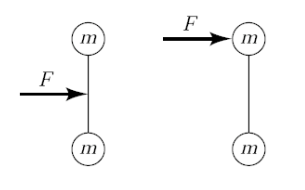 What if apply impulse to dumbbell consisting of two masses and massless rod? It is clear for me that left dumbbell will move straight line. But it is not clear for me what kind of motion will have right dumbbell. It will certainly have rotational component, but will its center of mass move?

As conclusion, in both cases dumbbells will have the same linear component of speed, but in right case it also will have rotational component.

You may think that it is a stupid question, but i just want to understand well how it works, and i have nobody to ask because i'm learning physics on my own. Thanks.

It looks like you've already done all the work. It is correct. Yes the center of mass will move.

Any unbalanced force on the object will cause an acceleration of the center of mass. $F=ma$

Any unbalanced force on the object that does not go through the center of mass will provide a torque and a rotational acceleration. $Fd = I\alpha$

Both of these happen simultaneously. It's not the case that the linear acceleration is reduced because the force is off-center.

In case 1, the dumbbell will move without any rotation. After an impulse of $Fdt$, the velocity of the centre of mass will be $\frac{Fdt}{2m}$. Both the dumbbells will have the same velocity, in the same direction.

In the second case,while the centre of mass still has the same velocity as in the previous case, both the dumbbells will have different linear velocities. The dumbbell will rotate around the axis passing through the centre of mass. The torque applied by the force will be $\tau = \overrightarrow{F} \times \overrightarrow{r}$. Using $\tau = I\alpha $ and considering point masses instead of spheres, we end up with $\omega = \frac{Fdt}{2mr}$ This provides confirmation that the dumbbell will rotate.

If you want a more physical feel of things, consider that the dumbbell has an unbalanced force, which causes the centre of mass to accelerate for a short time. Also, since the object is not hinged or fixed, it's natural tendency is to rotate about it's centre of mass. You can resolve the consequent motion of the dumbbell to obtain the individual equation of motion for each of the balls.

You could also consider the balls separately. In the top ball, the forces are $F$ and tension due to the rod. The tension acts as sort of a centripetal force causing the rod to move in a circular motion, while $F$ gives the rod a linear component to it's motion. On the lower ball, again the tension gives it a circular component. Also, the rod transmits $F$ to the lower ball as it is a rigid support.

Not the answer you're looking for? Browse other questions tagged newtonian-mechanics angular-momentum momentum or ask your own question.

3
Rotating/Translating Disk
0
Non-rigid body rotational dynamics
7
Why isn't momentum conserved in this pulley problem?
2
Parallel axis theorem: adding mass
1
An impulse is given to a sphere out of the center?
1
Particles velocities directly after an inelastic impact with a smooth frictionless surface
0
Impulse of two different objects
3
Three connected balls
0
Angular momentum, velocity and center of mass