If running a current through a magnet can reverse the magnetic field, then how strong does the current have to be and how would it best be run through the magnet.

The drawing below was made with the Jiles-Atherton ferromagnetism model, which is described in the answer by Art Brown https://physics.stackexchange.com/a/72789/26076 The values are typical for many magnetic steels.

Let's follow what happens when a magnet is initially built (this is how they do it commercially) and what you need to do to reverse that magnetization. As in the other answer, the magnetization is produced by putting a ferromagnetic material inside a magnetic field produced by a current, not by passing a current through the material itself. 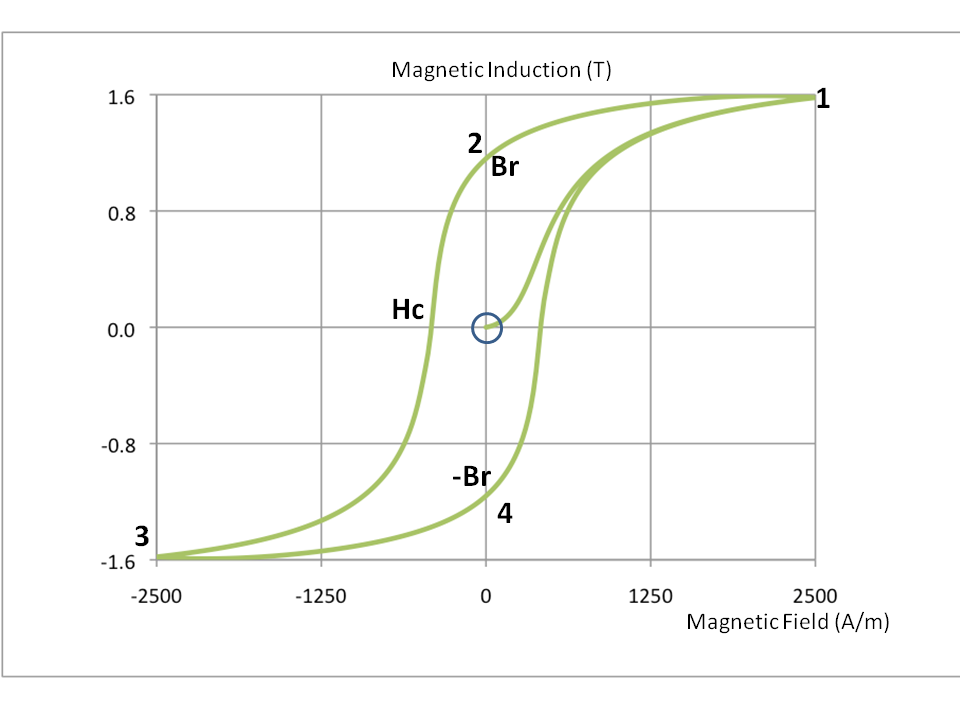 The unmagnetised material begins at the origin O. The magnetizing solenoid is powered up so that the magnetic field reaches several thousand amperes per metre. The ferromagnet follws the path joining 0 to the point 1. As this is done magnetic domains are aligned so that when the current in the solenoid is shut off, the material, instead of going back to the origin, follows the path 1 to 2 so that there is a "remanance" magnetic induction $B_r$ left in the material when the solenoid's current is nought.

To reverse the magnetic field, we increase the current in the solenoid in the opposite direction. We find that a nonzero, negative current is needed to bring the magnetic induction back to nought - this is the "coercivity" $H_c$. If we keep going, increasing the current so that the material is driven hard into saturation in the other direction, the material follows the path from 2 to 3. Now when the solenoid current is switched off, the material returns along path 3 to 4, and there is a remanance magnetic induction $B_r$ in the opposite direction.

So, in short, to reverse the magnetization in a ferromagnet, you need to steep it in a magnetic field of roughly the same strength as the field used to set up the initial magnetization but in the opposite direction. In this example, this amounts to several thousand amperes per metre (i.e. one ampere flowing through a solenoid with one thousand windings per metre).