How does quantum trapping with diamagnets work?

I just saw this demonstration by someone from a Tel Aviv University lab.

What they achieved there is mind blowing. I myself own a levitron that uses the Hall effect to levitate a magnet, the problem with that is the magnet must always be flat facing the Hall effect base, any unbalance will wreck the levitation. But in the case of the video you can see that he isn't constrained by such things, the disk can levitate and stay still at whatever angle and orientation. Instead of being levitated, the disk is simply being held still.

How does this happen? He referred to this as quantum trapping, but I've little idea about what that is....

Also, what material is the base in these demos? Is the circular track in the demonstration magnetic? I assume this is so. Is there any conceivable way for this technology to make objects levitate on any surface?

This paper describes the effect in some detail. Stable levitation is caused by a combination of the Meissner effect, and of flux pinning in Type-II superconductors.

The Miessner effect is the property of superconductors which prevents magnetic flux from penetrating the superconducting material (beyond the penetration depth). It occurs because the applied magnetic field induces "shielding" currents in the surface of the superconductor, which generates an opposing magnetic field that acts to exactly cancel the applied field. It is as though you've taken two conventional magnets, with the two north poles pointing each other, and suspended one above the other.

This alone is not enough to produce the stable levitation that is shown in the video; that requires the flux pinning property of Type-II superconductors. Flux pinning occurs when a magnetic field of relatively low strength is applied. The flux does partly penetrate the superconductor, but is concentrated around imperfections in the material. The superconductor is held in position rigidly in the magnetic field, and experiences a kind of friction when nudged because flux vortices are forced to move from one pinning site to another.

The design of the track allows the superconductor to move freely in one direction:

Along the length of the track there is no variance in the field, which allows the superconductor to move back and fourth with no energy loss. Perpendicular to the length of the track, the bar magnet's poles are aligned anti-parallel to each other, (S-N-S). This alignment produces a considerably strong gradient [along the width of the track]. The variance of magnetic field strength from one side of the track to the other is so great and the pinning so strong in this superconductor that there is not only drag but also a restoring force. If the superconductor is given a small push in attempt to force it from the track, it will oscillate slightly and quickly return to its original position.

If there is enough pinning and if the magnetic track is strong enough, then the levitating "train" should remain locked in place even if the track is rotated sideways or is upside down. Note that if the applied magnetic field is extremely strong, this can cause the superconductor to loose its superconductivity.

The video here on YouTube has some more information as well as video of the effect.

The puck is a layer of sapphire crystal 500 microns thick which is coated with a 0.5 micron later of superconductor and then gold. The whole thing is wrapped in cling film/plastic wrap.

The locking is explained at 1:52 to 2:09 and has to do with the magnetic field being forced through certain parts of the puck: 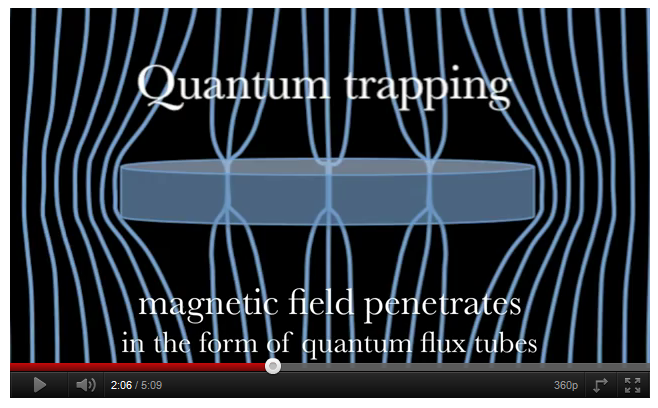 Now, I don't claim to understand all of this, but it's this that appears to facilitate the locking, though the video doesn't go into any detail at this point.

Not the answer you're looking for? Browse other questions tagged quantum-mechanics electromagnetism condensed-matter superconductivity levitation or ask your own question.

2
A correct explanation for the levitation of a superconductor above a magnet
0
Magnets quantum locking/levitating
4
What is “quantum locking”?
2
Problem of image method, super-conductor, current carrying wire's magnetic field

16
Is it possible to project a magnetic field at a location in space?
19
Topological band structure, difference between a sphere and a donut
11
Is it possible to levitate a toy maglev train using only permanent magnets as long as the train stays in motion?
4
How does Cooper pairing work?
0
How does the levitating water illusion work?