We should include only those accelerations that are caused by the piston, not those caused by the opposite side. The best way to accomplish this is to take $\Delta{t}$, exactly the time it takes for the molecule to undergo a round trip: $$\Delta{t} = \dfrac{2L}{v_x}$$ 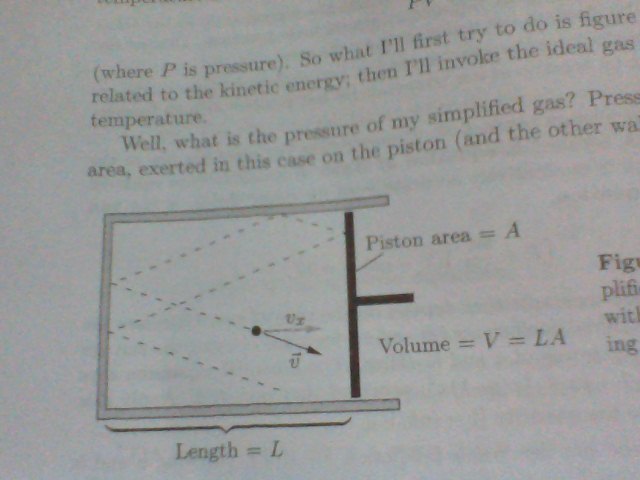 If I am right that $L$ is the cylinder lenght, then $\Delta t$ is the time from a molecule leaves the piston to it reaches it again. And we consider only one molecule know.

So the answer is yes. The molecule will hit the opposite wall and bounce back.

Assuming the molecule has horizontal speed $v_x$ (for more molecules $v_x$ is thus considered an average speed), during $\Delta t$ the molecule is sure to hit the piston exactly once. That might be the point of the text.

And why does the author want to exclude the acceleration imparted by the opposite wall??

Actually he is not "totally" excluding it - the rebouncing is necessary for the setup to make sense. If the opposite wall was not changing the direction of the molecule (rebouncing in an assumably elastic collision), which means changing the horizontal speed from $-v_x$ to $+v_x$, the piston would not necessarily be hit by the molecule during $\Delta t$.

He is just not including it in his calculations. To find pressure you don't need to consider more than one surface. By including as little as possible the model is kept simple.

If he is doing so, how can he measure the total pressure as he is ignoring the force of the molecule on the opposite wall??

Remember that pressure is per area, $p=F/A$. So ignoring the force on the opposite wall is irrelevant. You can say, you only need to consider one square meter - or just one surface of which you know the exact area. In this case the piston.

The speed $v_x$ (which would be average speed for more molecules) depends on temperature e.g. If that $v_x$ is known, he can find the acceleration also and find the pressure.

1
What occupies the space of a molecule in a gas which moves away due to kinetic energy?
2
To find average speed of gas molecule when the temperature is incresed
2
Is the internal energy of an ideal gas always $\frac{3}{2}nRT$?
0
Why is the mean speed of a gaseous molecule $\sqrt{\frac{8RT}{\pi M}}$?
2
What is the kinetic energy of one molecule of a diatomic gas?
0
Time required for change the momentum of a gas molecule in a cube
0
Temperature dependence of elastic collision of gas molecules with the wall
5
Why doesn't the equipartition theorem force the rotational energy of a monoatomic molecule to be significant?