The classical explanation of a black hole says that if you get to close, you reach a point - the event horizon radius - from which you cannot escape even travelling at the speed of light. Then they normally talk about spaghetti.

But here's a thought experiment. What if I have a BH with event horizon radius R such that the gravitational gradient at the event horizon is far too weak for creating pasta. I build a Ring with radius R+x around the BH. Then I lower a pole of length x+d from my ring towards the BH, so that the tip passes beyond the event horizon.

Now what happens when I try to pull the pole back?

Notice, that as $R_s$ approaches $r_s$, that ratio approaches zero! By the time your stick is nearly at the event horizon, the end of your stick is experiencing almost no passage of time compared to you.

Now, it seems to me that an interesting question is, if you push on this stick, what do you feel? A force pushing back? What kind of force is it?

When you push on a rigid body like the stick, you are actually sending a wave of pressure through the atoms of the stick that travels at the speed of sound in that material; that's how you effect a force on the front end of your stick without actually touching it. Such a wave would also slow down as it propagates down the length of the stick towards the event horizon, so the front side of the stick would not respond to your force as it normally would. I think that you would experience a kind of "pseudo inertia" - a time-dilation-derived inertia, as though your stick had an enormous mass. But I'll have to think about that some more to be sure.

If one end of the stick crosses the event horizon while the other is held by an observer who remains outside the horizon, the stick must break apart. I would say it's easiest to understand this conceptually if you think in terms of a Kruskal-Szekeres diagram for a non-rotating black hole, which has the advantage that light rays are always represented as diagonals 45 degrees from the vertical (unlike in Schwarzschild coordinates, where the coordinate speed of a light ray is not constant), and timelike worldlines always have a slope that's closer to vertical than 45 degrees, so the light cone structure of the spacetime works the same as in Minkowski diagrams from SR (if you're not too familiar with light cones in Minkowski diagrams, see this page). In this coordinate system, the event horizon is actually expanding outward at the speed of light, making it obvious why something that crosses it can never cross back out--it would have to move faster than light! Meanwhile, an observer at a fixed Schwarzschild radius, like the one hovering just above the event horizon, will have a worldline that's a hyperbola bounded from above by the black hole event horizon (it's also bounded from below by a white hole event horizon, but this is just because Kruskal-Szekeres coordinates are defined on the spacetime of an idealized eternal black hole, the white hole event horizon wouldn't be present for a realistic black hole that formed from collapsing matter). This page has a Kruskal-Szekers diagram showing one such hyperbola for an observer hovering at radius r=2.75M in Schwarzschild coordinates, as well as the worldline of an object that falls through the horizon, with light cones drawn at various points along the falling worldline: 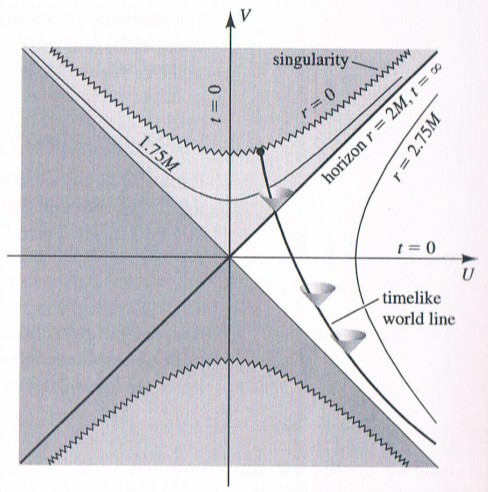 There is a useful similarity between this and the Minkowski diagram in SR for a family of accelerating observers, called "Rindler observers" because they have a fixed position in a non-inertial coordinate system known as Rindler coordinates: 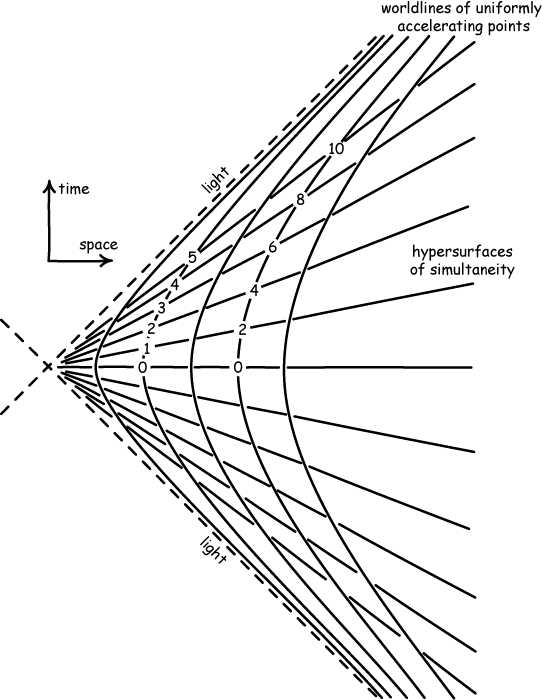 The Rindler observers are accelerating in such a way that the distance between them in the instantaneous comoving inertial rest frame of any one of them, at any point on their worldline, is a constant (this type of acceleration is known as Born rigid motion). Since their worldlines are hyperbolas that are bound from above by a worldline which is moving at the speed of light (the dotted line), which can be seen as one side of the future light cone of the point on the diagram where the two dotted lines cross, then since the Rindler observers never enter this future light cone, they can never see light from any event inside it. Thus, the dotted line is a type of horizon for them as long as they continue on the same accelerating path, known as the "Rindler horizon"--see the more detailed discussion on this page.

In your original question, as long as you're dealing with a very large black hole where the tidal forces at the horizon are small, and as long as the stick is fairly short so the region of spacetime where the experiment takes place is very small compared to the Schwarzschild radius, then spacetime will be fairly close to being flat inside that region. Thus, what's seen by the observer hovering at a constant Schwarzschild radius who drops one end of a stick past the event horizon will be similar to what's seen by a Rindler observer in flat spacetime who drops one end of a stick past the Rindler horizon. If the Rindler observer lets one end pass the horizon, but then grabs the other end and exerts enough force on it that it continues to move along with them on the accelerating path, then it's obvious the stick must just split in two, since the end being held by the Rindler observer will never cross the horizon, while the end on the other side of the horizon can't escape back out of it (since that would require it to move faster than light) and can't even maintain a constant distance from it (since that would require it to move at exactly the speed of light).

I think this article by Greg Egan is very helpful. The thing to remember is that you will not be "pushing" the stick towards the event horizon. The black hole will be pulling very hard on it. The force gradient is small, but the force itself (interpreted as the thrust that would be required to hover) is very large. Before the stick reaches the event horizon, it (and probably your arm) will begin to stretch. If you lower it slowly enough, at some point before the tip reaches the event horizon, the stick will have stretched to the breaking point. This is not tidal stretching, just stretching because your location is fixed and the stick is being pulled towards the BH. Once it breaks, the part that breaks off will accelerate without much distortion through the event horizon.

Not the answer you're looking for? Browse other questions tagged general-relativity black-holes event-horizon tidal-effect or ask your own question.