Voices of Animals And Humans

What are the differences between voices of animals and humans? (Not by ear but by a program or similar...frequency, other things) Does each animal in each species have a unique voice?

Is there a program that can compare two different sounds and choose one over another based on a pre-set sound?

Thank you for answering my questions, I'm doing it for a science experiment and I need help!

The percepted difference between, say, a C from a violin, a trumpet, and a singer, is due to the sounds having different overtones, that is notes at various integer numbers of octaves, thirds, fifths, etc. above the tonic (the "basic tone").

Sound is compressions in the air recieved by your ear (or a detector), and can be pictured by a plot showing the amplitude as a function of time.

If instead you plot the amplitude of the different frequencies, you have a so-called Fourier spectrum. A clean C from a synthesizer would just be a delta function (a single peak) at that note. But a C from, say, a violin would have several peaks at higher frequencies.

So the answer to your question is: yes, each human, animal, instrument, etc. have unique sounds, and there do indeed exist programs (e.g. the app "n-Track Tuner" for iPhone) that can Fourier transform a sound for you (of course, many sounds are so similar and/or fluctuate so much in time that distinguishing them can be difficult).

Below are two pictures from that app, the first showing the Fourier transform of tapping my coffee glass with my key (which turned out to be an A), and the second one whistling the same A. 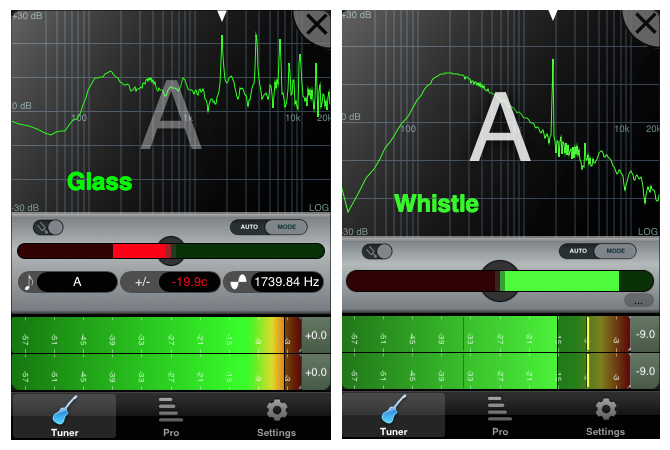 A sound can always be transformed to Fourier space, where you can read off the intensity of each frequency (The Fourier Spectrum) of your sound. The easiest way to write a program is using the fast fourier transform algorithm. FFT wikipedia

However, you have to do this for each point in time for voices.

If I understand correctly what you try to achieve is something like comparing a new sound of an animal with a set of recorded sounds of the same or different animals. To do this you need to have the Fourier spectrum for let's say each 10 ms of both the sounds and then for example subtract them and add the result for each 10 ms. The sound with the smallest result should "resemble" the given sound the most. This is just a suggestion and of course you could compare them in a different way.

In a project of mine, where we simulated the change of sounds in different materials, we used Mathematica to code it, but it is well possible that there are some programs that have some kind of functionality already built in.

The tool of choice to study "voices" is a spectrogram, a time-frequency map which shows the frequency content of a sound as a function of time. See for example

Example of a spectrogram (Dolphin, from wikipedia): 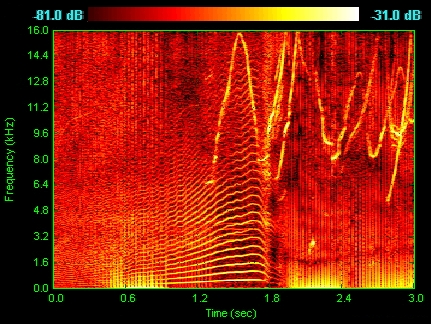 14
Is it possible to create an audible sound source in mid air by intersecting ultrasonic sound beams?
3
How to find the first-harmonic frequency from the frequency spectrum of a recording of this harmonic being struck on a guitar?
3
What sound frequency can be heard the greatest distance by humans?
3
Creating negative phase audio "voices" inside ambient sound
6
What causes a harmonica note to drop in pitch (AKA bend)?
0
Why can we hear instruments but not voices?