When you observe or measure a process in classical physics it almost never really alters the experiment. For example, if you have an Carnot engine and measure the volume and pressure of a gas in some a cylinder while the process is running you can do it without disturbing the process, meaning that if you "ran the laws of physics backwards" or ran the process backwards in time for the same amount of time you ran it forwards it will end up at the same place it started at.

However, in Quantum Mechanics if you in any way observe a particle during an experiment it can ruin the whole experiment. For example:

If you sent a particle through a ring and then stopped the process and ran it backwards without ever observing it, the particle would go back to where it came from but if you observed the particle in any way, (even after the experiment) it would not matter whether or not you looks at it forward or backward in time, because the probability that particle's path might fluctuate to the left is the same for either case. How does this work?

You are asking the following question: suppose a particle is travelling to the left. If you have a magical reverser, which reverses it's momentum, you can make it go back to where it started.

Suppose you measure the position of the particle along the way, and then apply the reverser. Then the particle will not necessarily go back to where is started. You are asking why this is, why there is an unavoidable disturbance to the state as a result of measurement.

First, it must be said that a measurement does not necessarily disturb the particle. If you have a particle travelling in a wavepacket which is a gaussian times a plane-wave, you can suddenly apply an external co-moving potential which is an appropriately sized harmonic oscillator, and check if the particle is in the n-th energy state for n not zero. If you get a null result, you have confirmed that the particle is in the ground state, and then you can release the potential, and let the particle continue on its motion. If you do all this quickly enough so that there would be no significant wavepacket spreading during this time interval for the free particle, you have confirmed the wavefunction is a moving Gaussian, and if you use your reverser, you will reverse the motion. This is a simple non-demolition measurement.

There is no answer to this question which does not involve learning quantum mechanics, unfortunately, since this effect is central to the description.

Observation implies exchange of energy. For a macroscopic body the energy exchanged for observation is relatively small and is not essential for the body dynamics. For a tiny object with quantum energy levels observation is not that innocent. Factually you observe an object thanks to its metamorphose. Before exchange you had one state, after you have another. So you have two states rather than one and the same object.

That being said though, if you unobserve and unmeasure, you can restore the process.

To approach this question it helps to have a mental model of how quantum experiments are carried out. In these, you don't generally get data from just one particle, but from what you might call a 'quantum ensemble'. That's effectively what the wave function describes: a special complex-valued distribution, which describes the statistics of particles that are all prepared identically in a coherent state.

Crucially you never measure each and every particle generated by the oven/filter combination, typically, you just sort of skim enough to get a trace of what each particle is doing in the ensemble.

So if the most you can do is measure an ensemble of particles, rather than track a particle individually, then how do you know that you are preparing them all in the same state? That question is difficult firstly because it requires acknowledging the limits of the scientific method, and secondly because it requires showing that whatever filters are used to prepare the wave function produce a perfectly coherent (unmixed) state, which requires making an almost impractical number of measurements to compute something known as the von Neumann entropy. But these are stories for another time.

The particles you do observe are generally scattered into a new state, and as others have mentioned, their dynamics cannot be reversed without you also 'undoing' your own observation (which is probably stronger than merely forgetting that the observation ever took place.) So it's fair to say that the part of dynamics involving your experience of observing and collecting data and learning and becoming yourself is essentially irreversible, for better or for worse. However, the dynamics of unobserved particles in the quantum ensemble is perfectly reversible (up until the moment a stray photon happens to reveal the state of one, at which point the 'coherent' ensemble shrinks further.)

Incidentally, whenever an electron is 'observed' it is never the electron itself that is seen. Instead, what you get is just a trace of the unscreened and therefore often long-ranged photon cloud that is stuck with it. With that in mind, it might be interesting to consider how the dots that your eyes observe on a photographic plate record a wave function collapse that is more subtle than localization of the electron's wavefunction alone, and that according to quantum mechanics, your eye's impression of the photographic plate doesn't fundamentally describe the plate itself, but rather is constructed only from the transitions between the states your eye is receptive to. 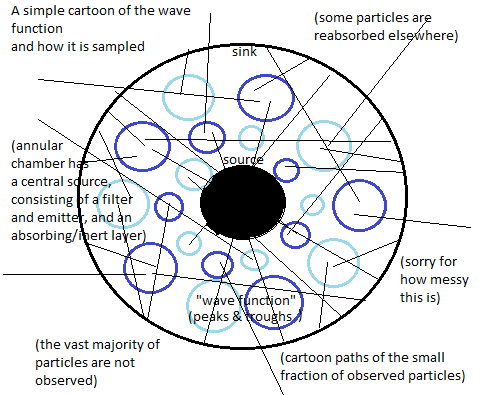 (To clarify, the 'origins' of the lines are meant to represent interactions at a sort of matrix of detectors that interact weakly with the particle, but are capable of scattering it into a more localized semi-classical or classical path. Also, the 'filter' is somewhat unphysical, as it would need to prepare particles in states with definite orbital angular momentum. This could be done perhaps with a carefully tuned axial magnetic field, but likely not without significant contamination from nearby thermally excited states.)

Not the answer you're looking for? Browse other questions tagged quantum-mechanics observers or ask your own question.

2
Time Reversal Invariance in Quantum Mechanics
1
Quantum Mechanics and Entanglement
2
Observing a particle over a certain domain
13
What was the need for doing experiments to prove quantum entanglement?
14
Why does the Stern–Gerlach quantum spin experiment conflict with classical mechanics?
3
Observing a photon during flight
1
Double Slit Experiment and Delayed Choice Quantum Eraser - light and time
0
Homebrew observing quantum corpuscle - photon or electron or atom - whatever... How to?
0
Specific version of the observer effect