Consider a parallel plate capacitor which is connected to potential difference $V$. Let there be a small spherical conductor, assume that its radius is much smaller than the distance between the plates $R<<d<<\sqrt A \qquad$ ($R$ = radius of sphere, $d$ = distance between plates, $A$ = area of plate). The question is when the sphere is in touch with one of the plate, how much charge approximately(leading order) will be induced on the sphere? 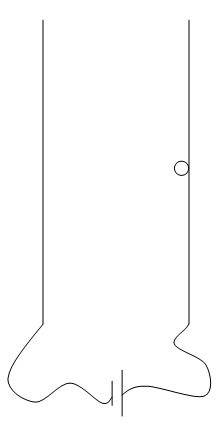 This problem can be solved by a conformal inversion, but the answer becomes more difficult when the plates are not infinitely far apart.

Choose the point of inversion to be the contact point of the plane and the sphere, the constant electric field at the left infinite half-plane becomes a dipole field right at the origin, while the sphere becomes a second parallel plane.

The method of images then produces reflected dipoles with the same orientation, with a uniform spacing along the x axis. The field is given by a superposition of these dipole fields, which allows you to solve for the electric field on the plane corresponding to the inverted sphere, and inverting back gives the charge.

The sum over the n-th image dipole is complicated before integrating for the total charge, but the total charge contributed by the n-th image on the right (plus its partner on the left) surprisingly falls off as $1/(n+1)^2$, making a sum which can be expressed completely in terms of $\zeta(2)={\pi^2\over 6}$.

With this convention, you can find the field of a dipole of magnitude D by superposing two opposite charges infinitesimally close, so that the answer is

A conducting surface in this convention has a surface charge equal to that electric field outside coming in perpendicularly, so I will use $\sigma$ and surface $E$ interchangably.

In 3d, a solution $\phi$ to Laplaces equation has conformal dimension 1/2, which means that it can be inverted around the origin about a circle with radius a to give another solution to Laplace's equation:

The multiplying factor in front comes form the linear scale factor of an inversion, which is $a^2/r^2$ at a point a distance r, but with a square root to account for the 1/2 scale dimension of $\phi$.

When you have a conductor, you can add a constant to the potential to make it be at zero potential. In this case, it stays a conductor under the inversion formula given above (it is easy to check that surfaces with $\phi=0$ are transformed into new surfaces with $\phi=0$). The inversion of a charged spherical conducting shell is another charged spherical conducting shell, or a conducting plane, in the case that the sphere passes through the origin of the inversion. If you invert a plane in a point on the plane, you get the same plane back.

The constant electric field E which was at left infinity before inverts into a point dipole of dipole moment $E(2R)^3$ sitting right on top of the origin. The problem is to determine the field of a charge between two conducting plates, touching one of the two plates, making a dipole with its image charge, right at this point.

This problem is simple by images. If you place a dipole with the same orientation at every point on the x axis where $x=2nA$, where n is an integer, it is easy to check that symmetry (and convergence) guarantee that the solution is constant potential on the conducting planes.

This infinite sum, when centered on the inversion image-plane of the sphere, gives the charge density of the surface.

where $u={\rho\over 2R}= \tan({\theta\over 2})$, where $\rho$ is the distance from the origin of the plane, and $\theta$ is the angular location on the sphere, with $\theta=0$ the contact point of the sphere and the image plane, and the sum is over all positive odd numbers.

The surface charge on the sphere

and the total charge on the sphere is given by

This is a consequence of the inversion formula for electric fields.

The resulting infinite sum of integrals is

Where z is $\cos(\theta)$, performing the integral is elementary (but tedious), and is easily done by a version of partial fractions, as follows:

There is a nontrivial check on the algebra in the limit $D\rightarrow 0$, where the pole terms of the two parts must cancel, because there is no real divergence in this limit before the partial-fracton decomposition. Substituting for A,B,C,D is made easier by first noting that $C+D=2n^2$ and $C-D=2$, and the determinant like thing is $AD-BC= -6n^2$. The result simplifies absurdly (it must cancel the pole-parts at n=1, but the cancellation of the pole at n=0 is a surprise)

This essentially finishes the computation. The sum is

And this multiplies the factor $4\pi R^2\sigma$, which is the charge on the sphere if it were uniformly charged with the same density as on the infinite plates to begin with.

Corrections for finite size of capacitor

When the second plate is not infinitely far away, the inversion process produces a small sphere with charge instead of a point dipole. The corrections here can be computed to leading order.

First of all -- I'm not solving exactly your problem, but I still think that it could be of some use because of the results I get. I'm solving the same problem in 2D by means of conformal maps. So I'm talking about cylinder on a plane. Not a sphere.

I've also checked that the amount of charge that "got off" the plane is $- 2\pi a \sigma$.

After all the fuss I've obtained that the charge, gathered on the cylinder is just equal to the "surface" of the cylinder $2\pi a$ times the "unperturbed" charge density $\sigma$. And I think that this result is general for all kinds of small irregularities of the plane...

0
Charge density on a plate of a realistic capacitor
4
How to get the electric field strength of a plate as approximation of a sphere
5
What would be electric potential due to induced charge sphere?
1
Charge on grounded conducting sphere in uniform E-field
1
Metal Sphere in a Uniform Electric field
2
Equidistant Equipotential Surfaces?
0
Potential outside of a capacitor
0
Direction of electric field between a pair of parallel plates having a positive charge in the space between them