what is reason of inability of indirect gap semiconductors to emit light efficiently?

I imagine that by light emission you're talking about radiative recombination, which corresponds to a release of energy excess (a photon) resulted from the combination of a conduction electron with a valence hole.

To understand the following reasoning, please recall than band structure diagrams, also called dispersion diagrams, are composed of Energy vs Momentum (or $\omega$ vs $\mathbf{k}.$).

Direct gap: A semiconductor with direct gap is described by a band structure for which the minimum energy state in the conduction band is aligned vertically with the highest energy state of the valence band. This in turn implies that an electron transition from the conduction band to valence band comes only with a photon emission (energy conservation) and zero momentum change in the crystal.

Indirect gap: The radiative recombination becomes less likely to occur, because for an indirect gap semiconductor, the minimum energy state in the conduction band has a different corresponding momentum $\mathbf{k}$ (k-vector) than the highest energy state of the valence band that has $\mathbf{k'}\neq \mathbf{k}$. This difference implies that for a radiative recombination to occur, the transition process must also involve the absorption or emission of a phonon to account for the momentum difference $\Delta \mathbf{k}=\mathbf{k'}-\mathbf{k}$, where the phonon momentum equals this difference. To conclude, we know that momentum conservation cannot be violated, meaning in a crystal, the crystal momentum has to be conserved, one way of achieving this would be via a phonon emission or absorption associated with momentum $\hbar\Delta \mathbf{k}$. This added process to the transition of the electron makes the whole photon emission event less likely to occur, or more formally the radiative recombination cross section is reduced because such mechanisms will be attenuated at low temperatures when the needed phonons fulfilling the selection rules are no longer readily available (recall phonon state population is governed by Bose-Einstein statistics). Now you know e.g. why laser diodes are always made of direct gap semiconductors.

Such transitions are often called non-vertical transition. Whereby photon emission/absorption is accompanied by either creation/annihilation (respectively) of a lattice vibrational phonon. Illustrative diagram from wikipedia: 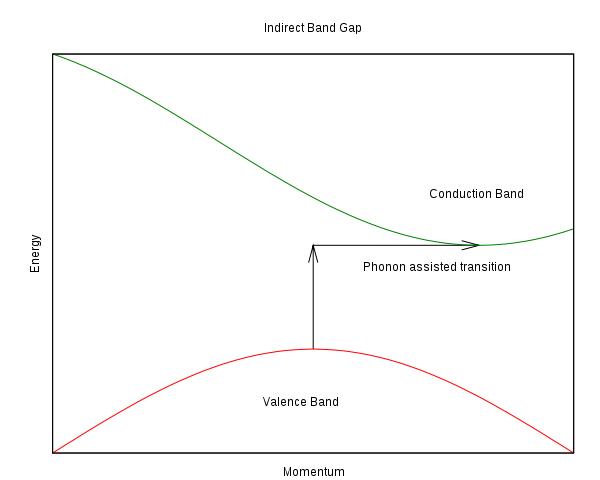