When a drop of water falls into water, where do the splashes come from?

When a drop of water falls into a reservoir of water from a high enough altitude, water droplets will splash (image credit): 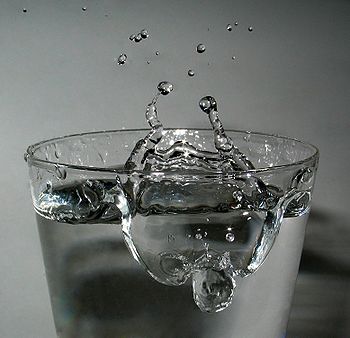 My question: Does the water in those droplets come from the original drop or from the reservoir?

When a drop of water impacts onto a liquid surface 'pool' of water, we can observer one or more phenomena:

Which will occur depends upon the size and velocity of the droplet. Specifically, the collision can be characterised by the ratio of the inertial forces to the surface force, given by the (dimensionless) Weber number, $We$ defines as:

where $\rho$ is the density of the droplet, $v$ is the velocity and $d$ is droplet diameter and $\sigma$ is the surface tension of the droplet fluid.

When the $We$ is above a threshold of $\approx 84$, the impact is characterised as a 'splashing', whereby a 'crown' is formed around the crater and a column of water rises from the middle.1

In order to determine whether the original drop is present in the 'recoiled' water, a series of photos were taken at successive time intervals 0.0003s apart, using a 4.83mm diameter drop (with coloured dye) dropped from a height of 175mm into a transparent pool of water. The number in the corner of each photo represents the sequence number of the photo (at 0.0003s intervals).

As can be seen from these photos, the colour dye is present in the water jets which recoil off the surface of the transparent pool water. However, not all of the water in the jets is from the coloured drop. Some of the original drop is trapped in a pocket below the surface, with the rebounding 'jets' having a 'coating' of the original drop material. The way we know this is because in the experiment, the coloured drop was made from water mixed with thymol blue, an indicator which is dark orange in colour at neutral-to-acidic pH. The pool water contained 0.1% sodium carbonate (alkali), which is transparent in colour, but when the two combined, the mixture turns blue in colour.

Some fascinating insight into the phenomenon can be gained by examining some high speed video footage.

If you look at this high speed video, you will see that when the water droplet falls into the water, it appears to bounce back out!

The explanation offered is that a layer of air gets trapped beneath the droplet as it hits the surface of the water. Some of the water in the droplet gets coalesced into the pool by the water tension, releasing a smaller droplet back out.

When the drop enters the water it pushes water in the reservoir out of it's way (this action uses up the energy of the drop, causing it to slow down and stop). When the drop has passed it leaves air behind it (a slip-stream effect). The reservoir water bordering this slipstream then moves from all sides to fill in the gap. When the water from opposite sides meet in the middle it must dissipate the energy in the collision. It cannot move to the sides or down, because there is water already there, so it 'bounces' up instead.

In the picture, one can see the original drop at the bottom of the disturbed water and the 'slipstream' above it.

0
Why does a new drop rises when a one falls?
13
Crown shape in water waves?

2
Kinetic energy loss when a rigid body falls into water
1
When an object plunges into water, what is the maximum height a droplet from splash can reach?
2
Do bubbles splash downward?
2
Can a drop of liquid splash as high as its origin?
0
Where does the centripetal force come from? How to calculate?
10
Where does the "water" come from in a mirage?