I posted a question before on this website asking how to build a boomerang for a project which can fly at least 200 feet, so how would I increase the flight path. A user responded with: slow down the rate at which it turns in its path: this means that the linear velocity needs to be small compared to the wing velocity (less differential lift), so we need fast rotation and a wing with small angle of attack. Second, we need a large moment of inertia so the boomerang maintains rotation during flight - @CuriousOne's suggestion of a tungsten tipped blade is certainly interesting (consider a 3 legged boomerang to give a more favorable construction). Finally - throw it hard. After researching some of the concepts he was talking about I still don't really understand how it will make the flight path longer. Can someone explain to me or direct me to a website which can, keep in mind I'm only 16 and I`m pretty new to physics. Thank you very much for your time. Please also state why you are a reliable source for my bibliography.

Let me try this another way (knowing that you are 16 helps in tailoring the reply...!).

I don't know if you are familiar with a gyroscope: that's a fast spinning disk that appears to be able to "stand upright". If you tilt it, then it doesn't fall over - instead its axis slowly spins around in a motion called "precession". You can see a nice demonstration of this in this youtube video

Now a boomerang is a bit like a gyroscope: it is spinning around and has angular momentum. Because it's shaped like a wing (in cross section) it creates some "lift" for itself which would normally keep it flying. BUT: there is something that makes the boomerang change its angle. That "something" is TORQUE: torque that is caused by the fact that the bit of the wing that is moving in the same direction as the boomerang "feels" more wind (and thus experiences more lift) than the wing moving backwards. This is actually a problem that helicopters experience all the time, and in fact in helicopters they change the angle of the rotor between the forward and the backward part of the motion to counteract this (fun fact that I am guessing you did not know - see for example 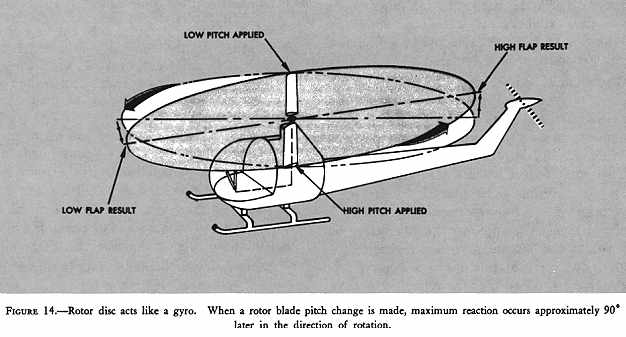 which can be found on http://avstop.com/ac/basichelicopterhandbook/ch2.html .

Now since the boomerang does not have the ability to change the angle of attack, it does experience a torque - and just as in the gyroscope, this torque causes precession. This precession is a good thing for the boomerang: if you throw it in the right way, it will change the direction it is pointing so that over time it returns back where it came from. Now the key to "flying far" is to slow down the rate of turning so it flies a long way (makes a big circle). To do so, we need for there to be relatively little torque compared to the angular momentum of the boomerang, because that's what gives rise to precession. 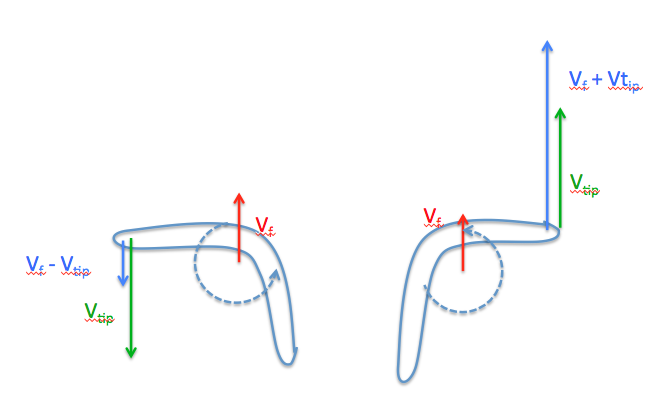 from which you can easily see that the wing will have greater lift when moving in the forward direction. The difference divided by the mean (relative difference in lift) then becomes:

Obviously, when $v_{tip}>>v_f$ the difference becomes small. This is why you want fast rotation of the boomerang relative to the forward motion - it slows down the precession and therefore the rate at which the boomerang "turns around and comes back". You can achieve this by making the boomerang larger - the tip moves faster, and as an added bonus you increase the moment of inertia.

The only other thing we need is that the boomerang must not lose its rotation too quickly, so it needs a large moment of inertia; and though we want it spinning quickly, we don't want it to get too much lift (just enough not to fall to the earth) - that means we need a low angle of attack so it gets the right amount of lift for the rotation speed.

As for "credible reference": this is of course a"the interwebz" so you have to be skeptical about any "advice" you read. Take a look at how this site works, and how it has developed its own version of "peer review". Then decide if you can cite me as a "credible source".

You may find the article at http://hyperphysics.phy-astr.gsu.edu/hbase/brng.html quite helpful - it has some diagrams explaining all of the above, and it's generally considered quite a reliable source of information about physics. They use the same simplified model of motion for the boomerang that I used (although I had not found that page when I wrote the above).

One final thing. You can easily make a miniature boomerang by cutting a piece of thin cardboard in the approximate shape of a boomerang - if you take an old playing card and cut it like this, it is just about right: 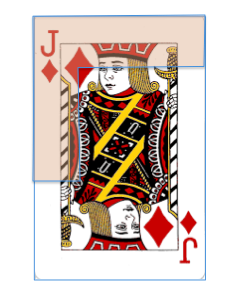 Bend the edges of the card like so (just a few degrees, to give it some lift): 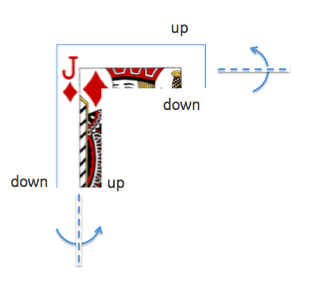 Finally, lay the card on the back of your left hand and give it a flick with your right index. When you point it up a little bit, it will fly off and return to you. A genuine indoor boomerang.

Both goals can be achieved with a spear thrower kind of extension http://en.wikipedia.org/wiki/Spear-thrower of your arm. The total mass of the boomerang also has to be matched to your particular physique. If it's either too light or too heavy for you, then you won't be able to transfer an optimum amount of energy into the device. That's exactly the opposite of what happens in sports, where the regulations force athletes to have a certain body build to be efficient. In this case you can adjust the device to your needs, which means that you may gain an advantage over a stronger/faster guy who uses the wrong weight boomerang.

4
How does a boomerang behave in microgravity?
1
Why dosen't my boomerang return