Why is that neutron stars are never depicted in a Hertzsprung-Russell diagram? They can be placed in the bottom left corner but you will never find any diagram in literature showing neutron stars.

The HR diagram is an observational diagram. Whilst neutron stars could be placed in the HR diagram in the same way as white dwarf stars are, it turns out to be impractical to do so because the photospheric luminosity and photospheric temperature of neutron stars is next to impossible to determine. The reason for this is two-fold: (i) Neutron stars start off very hot (interior temperatures of $\sim 10^{10}$K and photospheric temperatures of $\sim 10^{7}$K, but they cool very rapidly. Within $10^4 - 10^5$ years after the originating supernova they will have cooled below a million degrees, then photon cooling takes over from neutrino losses and they may cool to a few thousand degrees within 10 million years (e.g. Yakovlev & Pethick 2004). There are many uncertainties and unknowns in these processes - see below. (ii) The photospheric emission is usually dwarfed by emission from the magnetosphere or luminosity due to accretion from a companion or the interstellar medium.

One can theoretically work out where neutron stars should be by assuming that the emission is like that from a blackbody and that the radius $R \sim 10$ km.

So, contrary to what you you say in your question, most neutron stars could be cool and very, very faint and spend the majority of their (cooling) lives at the bottom or even bottom-right of the HR diagram. There is actually a huge uncertainty over where neutron stars would appear on this locus. The only neutron stars with measured luminosities and temperatures are extremely young ($<10^{5}$ years) and these are still extremely hot $10^{6}K$ and quite luminous $\sim 0.1 L_{\odot}$. Old neutron stars are practically invisible, but their very low heat capacities means that any "reheating processes" could very effectively raise their temperatures. Such processes include Ohmic dissipation of the magnetic field, some kind of thermalisation of their rotational energy or accretion from the interstellar medium. For the latter, luminosities of $10^{20}-10^{21}$ W may be possible, implying effective temperatures of tens of thousands of Kelvin.

You never see this locus shown on an HR diagram because it is usually way off the bottom of the plot and there are no observed objects to populate it.

The classic HR-diagram has the temperature increase to the right (so lower temperatures are on the right and higher on the left), as seen in the image below: 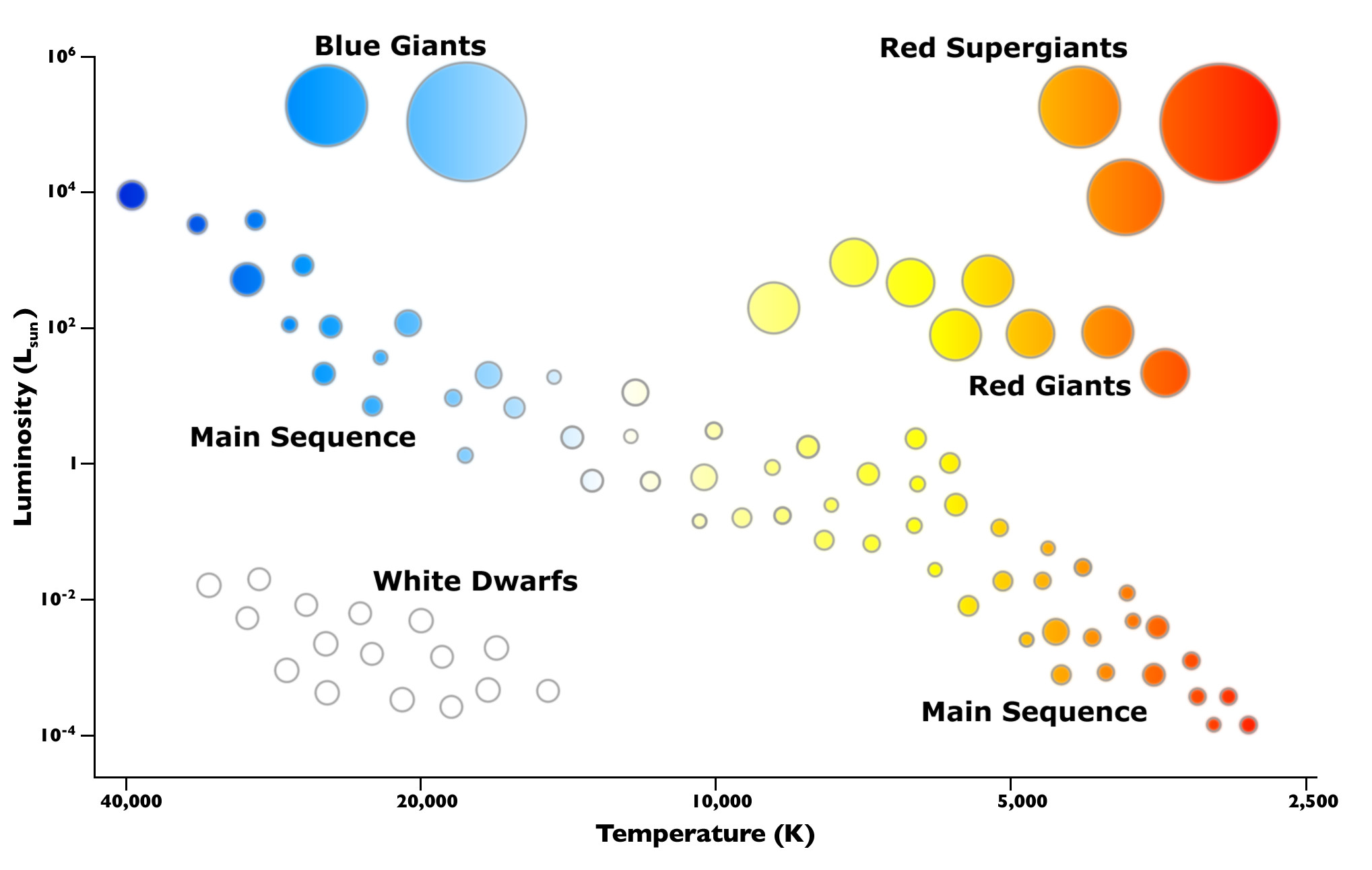 The neutron star has a surface temperature of about a million degrees, which would put it way off the chart towards the left, not towards the bottom right.

Not the answer you're looking for? Browse other questions tagged astrophysics temperature neutron-stars luminosity or ask your own question.

1
What is the closest distance for an undiscovered old neutron star and how long would it take to get here? To help people scared of neutron stars