Both plates of capacitor have positive voltage

If both the plates of a capacitor are connected to positive voltage (say, one is +10V and the other is +5V), but there is a voltage difference between the plates, will the capacitor be charged? And why?

About two points with positive voltage

Like for gravitational potential energy, you can define your reference point anywhere. You can define zero potential to be one of the points, you are measuring between. Or to be the ground. Or another point in the circuit. It doesn't matter, since all you are looking for is the potential difference.

In your case, the two positive voltages you find must be because they are measured with a third reference point. You can have any potential at those points by choosing another third reference.

Bottom line is: if they are both positive doesn't matter. Only the difference matters.

Will the capacitor be charged in your case?

That surely depends on the circuit. Yes, with a potential difference (a voltage) between those two plates (not regarding their individual potential in reference to some other point) charges will flow and the capacitor will be charged - unless of course it is fully charged already, or the circuit is not finished.

Capacitance of a capacitor is found with:

So for a set voltage, Q is the amount of charge that will build up. When this is reached (or nearly reached) the capacitor is fully charged.

So, say we have two DC voltages, $V_1$ and $V_2$, where $V_1 > V_2$, that we connect each terminal to. Even if both DC voltages are positive, or both are negative, this will set up an electric field in the circuit that drives the current from the higher voltage to the lower voltage, i.e. Move electrons from the lower potential to higher potential.

This tells us that if the two terminals have the same voltage, the capacitor will have no charge after the transients die out over time (when electrons are moving). Otherwise we get a charge proportional to the difference in the voltages, of opposite polarities on the two plates.

Just to highlight that the fact the two voltages are positive doesn't matter: voltages (i.e. Potentials) are relative, so if you increase both voltages here, you get no change in the circuit's response. Try putting values of voltage into the equation above, and repeat for voltages that are offset by the same amount: the charge does not change! 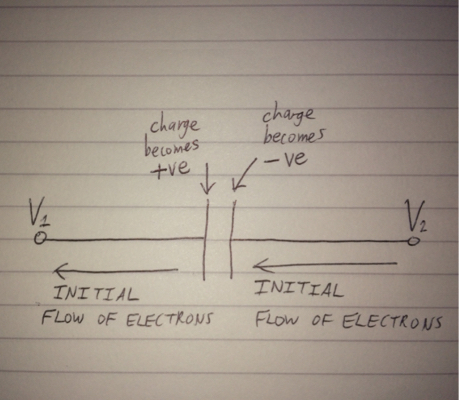 Not the answer you're looking for? Browse other questions tagged electrostatics capacitance voltage or ask your own question.