How does centripetal acceleration produce the tangential velocity?

I just got started on my physics course, and already I am confused with this stuff called centripetal acceleration.

One thing I don't understand is what produces the velocity that is tangent to the circular path.

I searched on google, and got from PBS Education that there is a change in the velocity which produces the acceleration: 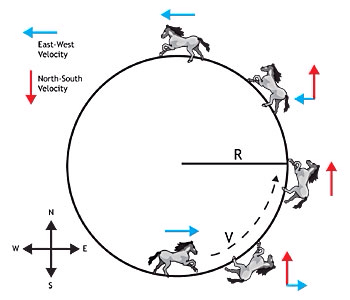 But my textbook tells me that there is no change in the magnitude of the velocity only that its direction is changing.

On another website, there is a proof explaining that there is an inward acceleration because the change-in-velocity vector points inward which indicated that the acceleration vector should also be in the same direction. 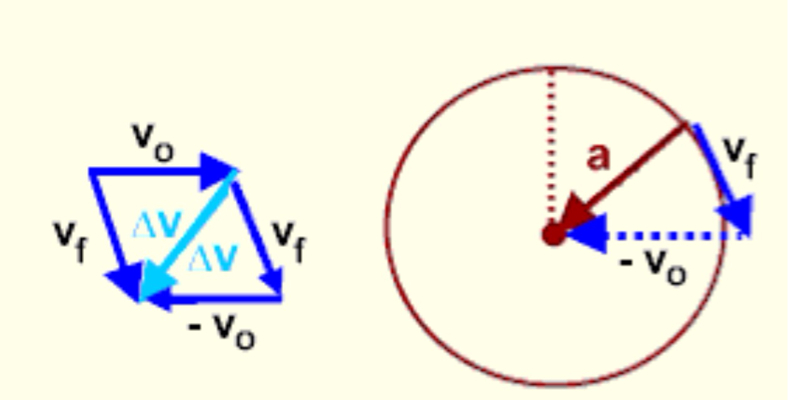 If you wish to explain it in calculus, bear in mind that I don't know anything about it. 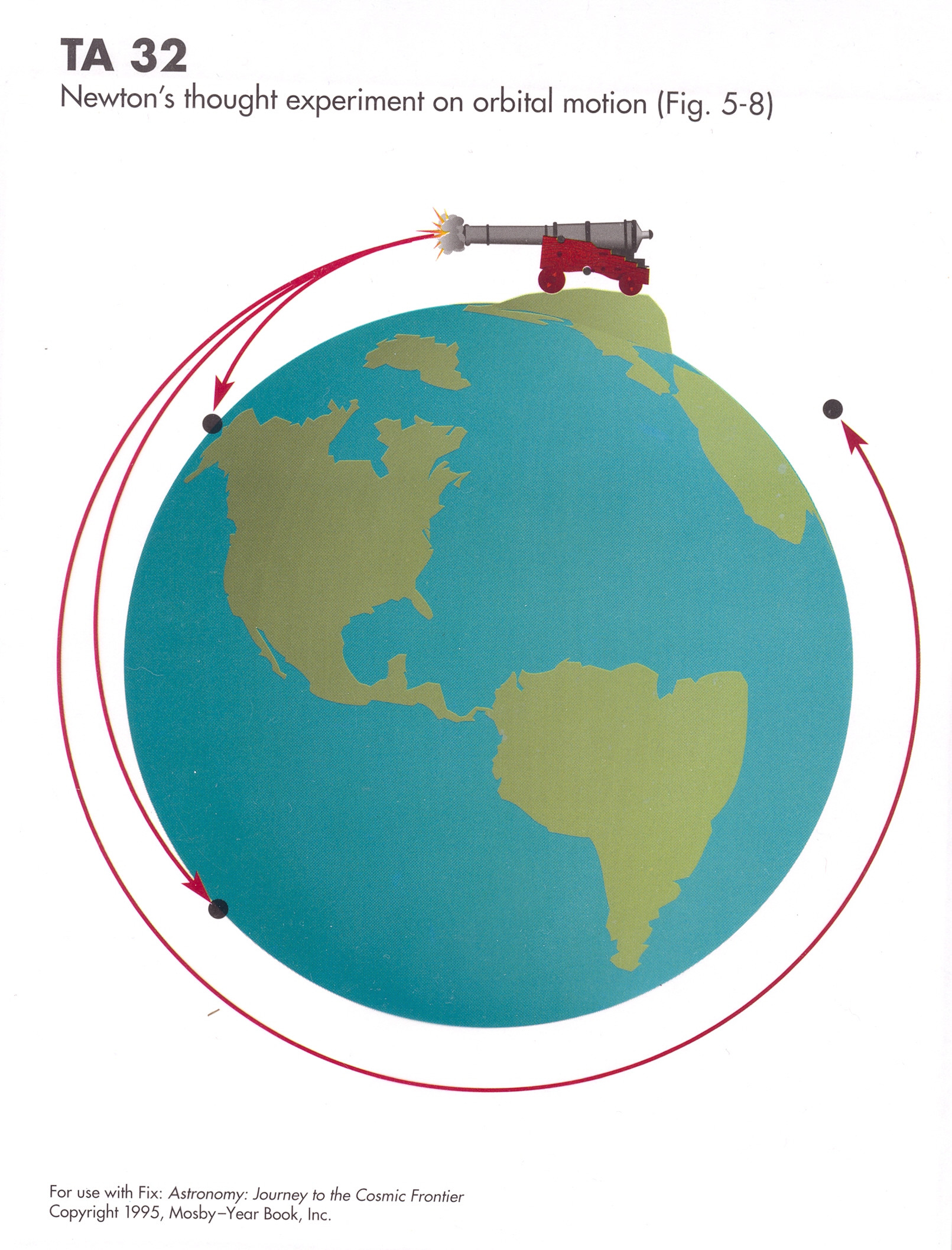 There's a java applet here that allows you to play around with different initial tangential velocities for the projectile. Note that if you check the box "show full orbit" you can see what would happen if all the Earth's mass were concentrated at the center of the planet, so a cannonball fired from the same radius and with the same tangential velocity would be in some sort of elliptical orbit no matter how small the tangential velocity, an orbit that that can pass below the radius of the real Earth's surface (so in real life it would simply crash into the surface without making a full orbit). For a non-java illustration of this see the diagram in slide 23 here, attributed to Physics for the Enquiring Mind, Ch. 22, Fig. 29:

From the fact that all arcs of the cannonball can be understood as sections of possible elliptical orbits, you can deduce that even before the velocity needed for circular orbit, there would be a velocity that would result in an elliptical orbit that gets very close to the radius of the surface on the opposite side of the Earth from the cannon (ignoring atmospheric drag), then begins to climb in height again as it continues around the Earth, until returning to the height of the cannon at the position the cannon originally fired it.

A small addition to @Hypnosifl's answer:

Key to understanding the circular motion is the fact that at any moment in time the acceleration (force keeping the horse / object in a circular path) is exactly perpendicular to the direction of motion. We have to do "almost calculus" to explain this... but maybe you will be able to follow:

Imagine we initially have a horizontal velocity, and the acceleration is vertical (downwards). How come the new velocity isn't faster than the old one? 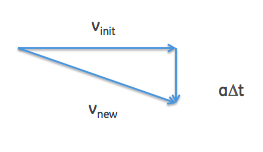 When the change in velocity due to acceleration $a$ for time $\Delta t$ is added to the initial velocity $v_{init}$, the new velocity has a magnitude

When $a\Delta t$ is small, we can do a Taylor expansion and get

Now if we look at a shorter and shorter interval $\Delta t$ we can see that the change in magnitude in velocity, which goes with the square of the interval, will become zero.

This means that if we keep the acceleration at right angles to the velocity (which is done in circular motion) then the speed will be constant - which is of course what we observe for circular motion of things like satellites, the moon, etc (barring small effects like tides, atmospheric drag etc - which are "imperfections" and not part of the essence of the orbital motion).

Let a body be moving with constant velocity $v$ in a straight line. Then suddenly an external agent(force) acts on the body such that the body gets deflected from its straight line to follow then another path which may be curved (but need not be circular, circular makes the case simpler) . The position vector of the body gets rotated about a point but that doesn't bother the velocity $v$ of the body.

You can tell then what about the case when the tangential velocity changes.

Centripetal acceleration doesn't cause the velocity, or rather its magnitude, but it is responsible for the change of its direction. Picture this scenario: the horse starts running at a constant velocity $\mathbf v$. Then it get into a bend of constant curvature $r$. The horse is then subject to a centripetal acceleration $\mathbf a$ that allows it to go on a circular motion by keeping a tangential velocity of constant magnitude. For this to be possible there must be no component of the acceleration along the tangential velocity, hence the orthogonality relation between $\mathbf v$ and $\mathbf a$.

However, the velocity vector $\vec v$ is not a constant vector because it's direction is always changes. A vector is constant when both it's magnitude and direction are constant. And this change in direction is what is produced by the centripetal acceleration!

Also remember that, Centripetal acceleration and velocity are direct consequences of each other when a body tries to move in a circular motion with a velocity $v$ without tangential acceleration(google if you like!).

Also note that usually as you go along your physics course you will see that the centripetal force or acceleration is mostly provided by an outside agency! For e.g., Gravitational field, Magnetic field , Tension of a taut string ,etc! Which causes the body to move in a circular path with a constant magnitude of velocity $v$

And at times velocity is produced from prior sources! Before the object is subjected to circular motion. For e.g., A charge moving perpendicular to magnetic field with constant velocity! That velocity is provided beforehand by any means possible.

If you are confused about how does a change in velocity is possible when magnitude is constant.

what produces the velocity that is tangent to the circular path.

Assuming no dissipation, e.g., friction, and uniform circular motion (the speed of the object is constant), there is nothing required to maintain the speed. This is due to the conservation of angular momentum.

If the speed is changing, the motion is not uniform circular motion and then there is tangential acceleration which produces change in tangential velocity.

So, if you're picturing an object initially at rest and finally in steady circular motion, there is a time during which there is tangential acceleration in addition to the (increasing) centripetal acceleration.

Once the tangential acceleration is zero, the speed of the object is constant and the centripetal acceleration maintains the uniform circular motion.

It might seem a late answer but i was also plagued by the same issue. I know that two comppnents of perpendicular to each other doesn't affect both its magnitude and directionbut can it be said for acceleration? I looked at it this way. Since time after time a new component a x t Where a is acceleration and t is time why is the magnitude not changing? That is a valid question. However if we see the person twirling the string with a ball as the system, the total external torque acting is zero. Thus conservation of angular momentum is applicable. Now the person is at rest and the angular momentum is Mv x r where v and r are vectors keeping the position of the person as origin. Thus r is zero. Thus total angular momentum magnitude reduces to mvr of the ball which must be constant as momentum is conserved.

Not the answer you're looking for? Browse other questions tagged forces acceleration centripetal-force or ask your own question.

38
Shine a beam of light horizontally, drop a stone from same height - would both hit the ground at the same time?
6
Why are orbits around black holes stable?