Validity of Maxwell's equations with no aether or relativity?

In From Paradox to Reality: Our Basic Concepts of the Physical World by Fritz Rohrlich page 55 it states that

[...] just doing away with the ether would not have resolved all problems. The problems of the validity of Maxwell's theory would have remained: with respect to which reference frame is the theory valid?

Please can someone explain this to me?

As I understand it, the aether is the medium through which light was thought to propagate at $c$ (i.e., the reference frame at which the speed of light was $c$ and in which Maxwell's equations take their nice, standard form). Thus, by saying 'doing away with the ether' are we just not saying that there is no special reference frame where the speed of light is $c$, which surely means that the theory is valid in all or no reference frames. And therefore does this sentence simply contradict itself by saying e.g.

(Which makes no sense.)

The problem is that Maxwell's equations predict the speed of any EM wave to be $c$. But this doesn't make sense in Newtonian physics because velocity addition is linear. The aether offered a possible solution because it picked out a preferred reference frame, but if you do away with the aether you're back at the original problem: with reference to what do EM waves have a speed of $c$?

The solution is of course that we need to use special relativity, and in SR velocity addition is not linear. 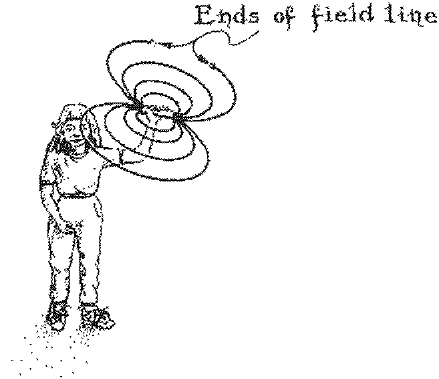 The following passage has been extracted from the book "Black Holes and Time Warps, Einsteins Outrageous Legacy" by Thorne:

If one expressed Maxwell's eletromagnetic laws in terms of the electric and magnetic fields measured at rest in absolute space, the laws took on an especially simple and beautiful mathematical form. For example, one of the laws said, simply, "As seen by anyone at rest in absolute space magnetic field lines have no ends". However, if one expressed Maxwell's laws in terms of the slightly different fields measured by a moving person, then the laws looked far more complicated and ugly. In particular, the "no ends'' law became, "As seen by someone in motion, most magnetic field lines are endless, but a few get cut by the motion, thereby acquiring ends. Moreover, when the moving person shakes the magnet, new field lines get cut, then heal, then get cut again, then reheal". The new mathematical discovery by Lorentz, Poincare, and Larmor was a war to make the moving person's electromagnetic laws look beautiful, and in fact look identical to the laws used by a person at rest in absolute space: "Magnetic field lines never end, under any circumstances whatsoever." One could make the laws take on this beautiful form by pretending, contrary to Newtonian precepts, that all moving objects get contracted along their direction of motion by precisely the amount that Fitzgerald needed to explain the Michelson-Morley experiment!

As I understand, if magnetic lines had ends, then there should exist monopoles, which we don't believe to exist. If length contraction is not included, there will be open ends. Here arises the test of validity.

Robert B. Laughlin, Nobel Laureate in Physics (cited on wikipedia)

It is ironic that Einstein's most creative work, the general theory of relativity, should boil down to conceptualizing space as a medium when his original premise [in special relativity] was that no such medium existed [..] The word 'ether' has extremely negative connotations in theoretical physics because of its past association with opposition to relativity. This is unfortunate because, stripped of these connotations, it rather nicely captures the way most physicists actually think about the vacuum. . . . Relativity actually says nothing about the existence or nonexistence of matter pervading the universe, only that any such matter must have relativistic symmetry. [..] It turns out that such matter exists. About the time relativity was becoming accepted, studies of radioactivity began showing that the empty vacuum of space had spectroscopic structure similar to that of ordinary quantum solids and fluids. Subsequent studies with large particle accelerators have now led us to understand that space is more like a piece of window glass than ideal Newtonian emptiness. It is filled with 'stuff' that is normally transparent but can be made visible by hitting it sufficiently hard to knock out a part. The modern concept of the vacuum of space, confirmed every day by experiment, is a relativistic ether. But we do not call it this because it is taboo.

The modern treatment of maxwell's equations is that you have a six-valued function (giving the electric $\bf E$ and magnetic $\bf B$ fields) of three dimensional space. If you plug in a point in space, you can get six numbers that describe the electromagnetic field at that point. So you do have some sort of backdrop on which you phrase electrodynamics. The point is that this backdrop is space itself, and not any kind of matter. For if it were matter, one would predict phenomena which don't occur.

7
About the Ether Theory acceptance
2
Why does the Michelson-Morley experiment only contradict the aether?

7
Is a preferred reference frame of the universe the old aether?
5
Do Maxwell's equations independently impose constraints on the speed of light?
3
Why does the existence of an aether go against Maxwell's equations
2
Why does the Michelson-Morley experiment only contradict the aether?
2
Galilean Relativity and Electrodynamics
31
What does a Galilean transformation of Maxwell's equations look like?
0
Maxwell Equations in Earth frame
1
What is Ether theory? (I think the book I had read is giving wrong explanation of Ether)