Why doesn't figure two take into account the field produced by the outer shell? 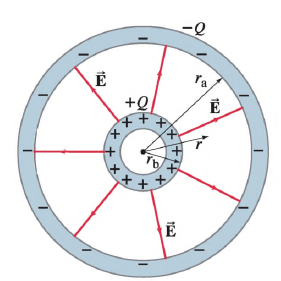 The answer is - it does! Be careful, your formula for E only works because of spherical symmetry.

The second field calculation uses Gauss's law, which does not work as you have stated, instead it says that the flux of electric field out of a closed surface equals the charge (divided by $\epsilon_0$ contained within. Only in a case of high symmetry will you be able to say that the electric field cuts the spherical surface perpendicularly and that the flux is $4\pi r^2 E$.

If however, the two shells you have drawn are conductors it will always be the case that the interior (static) E-field due to charges on the outer conductor will be zero. i.e. To answer your question - you will always be able to neglect the interior field from the outer conductor because it is zero. This will apply for any shape outer conductor. The E-field at the surface of any conductor must be parallel to the surface vector or free charges would move to make it so. In that case you can always construct a Gaussian surface with the E-field parallel to the surface vector and, because there is no enclosed charge, the next flux must be zero, so the E-field must be zero. In other words, the (static) E-field is always zero inside a hollow conductor. So the only field that need be taken account of is that produced by the inner conductor (recall that you can simply superpose electric fields).

(Aside: I specify static, because it is possible for time-variable E-fields to penetrate inside a conducting shell if it is thin enough, by inducing time-varying currents in the shell).