We've all seen the depiction of gravity bending space downwards, and so attracting objects into the dent it creates, cf. e.g. this and this Phys.SE posts. That's intuitive and makes a lot of sense, except it uses one plane to visualize the effect.

There is also space above and to the side and what not, how does it bend space in all directions so that objects are pulled to the center of the source of gravity?

Basically a parallel to the classic depiction except with space everywhere rather than just one plane.

The type of diagram I think you're referring to is called an "embedding diagram", and it's not just schematic or conceptual, there are well-defined mathematical rules for creating such diagrams. Here's an example from this page:

To understand the idea, you need to understand the main concepts of how general relativity deals with gravity: matter/energy cause spacetime to become curved, and particles in free-fall (no non-gravitational forces acting on them) follow geodesic paths in curved spacetime, which for slower-than-light particles means paths that maximize the proper time relative to other nearby paths. If you haven't come across these ideas before, I recommend reading a good non-mathematical introduction to the concepts of general relativity written for a layman audience, like General Relativity from A to B.

Another idea to be familiar with is the relativity of simultaneity--given a particular 4D spacetime, there are multiple different ways you can "foliate" it into a stack of 3D "space-like" hypersurfaces ('hypersurface' since we normally use 'surface' to refer to something with only two dimensions), each representing the curvature of space at a particular moment in time according to some definition of what events happened at the same "moment" (i.e. particular definition of simultaneity). The curvature of 4D spacetime, and of 3D hypersurfaces, is defined using the metric for that spacetime, which allows you to calculate the "length" of any arbitrary path through that spacetime, either proper time along "time-like" paths or proper distance along "space-like" paths (see the wiki spacetime article for a discussion of the meaning of these terms, along with this answer of mine where I discuss the physical meaning of proper distance on space-like paths). In a particular space-like 3D hypersurface, all paths through spacetime which are confined entirely to that surface must themselves be space-like paths, and the metric can be used to find the proper distance along any such path.

Once you understand this background, you can understand the concept of what's called an "isometric embedding diagram". Basically, just as a 3D spacelike hypersurface represents a "slice" through the larger spacetime, you can take a 2D "slice" through the curved 3D hypersurface, and for any path confined to this 2D surface, the metric can be used to compute the proper distance along it too. Then the idea is to find to create an "embedding diagram" of a curved 2D surface in ordinary 3D Euclidean space, such that all paths on the diagram can be mapped onto paths in the 2D slice through the curved 3D hypersurface, and the length of each path on the diagram is proportional to the proper distance along the corresponding path through the 2D slice, as computed using the metric. 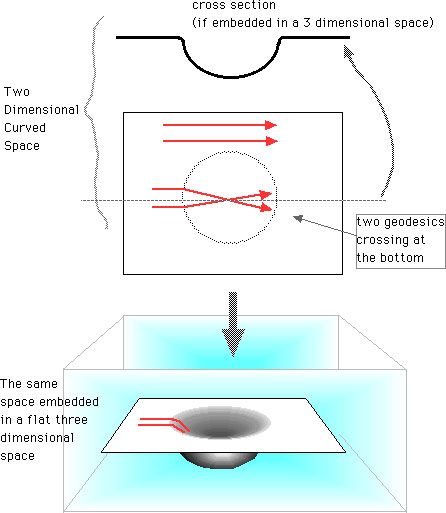 The bottom image shows the curved 2D surface as it would appear if sitting in a higher 3D space. The middle image shows a 2D version of the space where the "depression" is just depicted as a circular region, as a 2-dimensional being, a Flatlander, might visualize it. The horizontal dotted line in the middle image represents the 1D "slice", and then the top shows that same slice as a curve (a cross-section of the bottom image), one which could be confined to a 2D plane so a Flatlander would be able to visualize its shape. The embedding diagrams used in general relativity are much like this, but with all the dimensions raised by one--instead of a 1D slice through a 2D space which is really curved, we are talking about a 2D slice through our 3D space (what we would think of a as a plane, like the equatorial plane of a planet), whose curvature can then be depicted in a way that allows us 3D beings to visualize it.

In the case of those depressions that are often used to show the curvature of space around a spherical body like the one I included at the beginning, I think it's most common to create them using a Schwarzschild spacetime which includes a single non-rotating spherical body, and using Schwarzschild coordinates in that spacetime. Then the 3D hypersurfaces can be defined as fixed values of the Schwarzschild time coordinate, and then taking a 2D slice through that surface by choosing a fixed value of one of the angular coordinates, while allowing the radial coordinate and the other angular coordinate to vary. For the region of space at a radius larger than that of the surface of the spherical body (or larger than the event horizon, in the case of a black hole), the embedding diagram for this "exterior Schwarzschild solution" would be a Flamm's paraboloid.

Note that since the curved spacetime in this case is spherically symmetric, it shouldn't actually matter what fixed value you choose for the angular coordinate--you can choose a 2D plane that goes through the center of the spherical body (r=0) at any orientation and the embedding diagram showing the curvature of space in that slice would be the same (in terms of the lower-dimensional analogy depicted in the diagram above, you could change the angle of the dotted line representing the 1D slice through the curved 2D space, but as long as the dotted line went through the center of the spherical region the curve representing the cross-section would look identical). So that's basically how I would answer your request for "a parallel to the classic depiction except with space everywhere rather than just one plane"--it's the nature of these diagrams that they can only ever represent the curvature in a single 2D slice (since we can visualize a curved 2D surface, but can't directly visualize a curved 3D space, only model it mathematically), but you can choose many different slices and get an embedding diagram for each slice if you want to get a wider view of the curvature throughout all regions of 3D space.

One other point is that you should resist the temptation to think that these diagrams are meant to explain gravity's attraction in terms of objects falling "down" into a depression, as you seemd to do when you said these diagrams show "gravity bending space downwards, and so attracting objects into the dent it creates". All that matters to these diagrams is that they represent the lengths of paths through the corresponding surface of the spacetime accurately--the orientation of the embedding diagram is completely irrelevant! You could just as easily flip them around so that the "depressions" would become "hills".

Curved space means the Euclidean geometry does not work in that space.

The common visualization of curved 2D space used for gravity field uses 3D object in shape of horn. The 3rd dimension is not necessary to represent the curved 2D space, but is used to demonstrate the curvature in an obvious way - for example, triangles drawn on the horn are not real Euclidean triangles, but consist of curved segments.

(The horn shaped surface is just a metaphor for the curved spacetime around massive object. It has nothing to do with physics of gravity.)

The analogous visualization of curved 3D space would thus seem to need 4-dimensional representation of 3D space in 4D space, where the 4th dimension would be used to show the curvature - for example as above, that triangles drawn in the 3D space are not Euclidean triangles in the 4D space.

However, people have no access to 4th spatial dimension and it may not even exist, so this kind of visualization is impossible.

There are other ways to visualize curvature of 3D space. For example, by constructing a cloud of points with color that is a function of the curvature (single number). In case of central gravity field, the points would have greatest concentration in the center and gradually get rarified as distance from the center increases.

Or alternatively, you can draw surfaces of curvature that is constant on the surface but changes by constant chosen amount between the surfaces - a set resembling the structure of onion.

Not the answer you're looking for? Browse other questions tagged gravity spacetime curvature visualization or ask your own question.

0
How would you visualise a curvature in spacetime?
60
Why isn't length contraction permanent even though time dilation is?
34
Does the curvature of spacetime theory assume gravity?
11
Misused physics analogies
9
What does spacetime look like near a black hole?
14
Visualizing GR spacetime distortion in 1+1D spacetime instead of 2D space
6
Ricci scalar and General Relativity cartoon pictures
4
Physical visualisation of curvature
2
Gravity spacetime visualization
-3
If the space-time curve was quantified and has a mathematical function what would the derivative of the function mean?
See more linked questions

0
Space as "flat" plane
0
How does gravity truly work in the bend of spacetime?
44
Why does the speed of an object affect its path if gravity is warped spacetime?