What will happen if I remove a nail which stops a plank from moving on a smooth floor because of a solid sphere pure rolling on it?

What will happen if I remove a nail which stops a plank from moving on a smooth floor because of a solid sphere pure rolling on it?The plank has it's upper surface which is in contact with the sphere rough, therefore the sphere is rolling(purely). I think if I remove the nail then the plank can also move, which is mainly due to absence of any external force, but don't have an analytic idea, you may call it intuition. 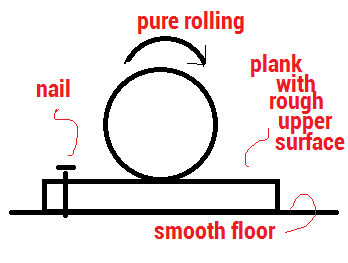 If the sphere is already rolling when you remove the nail, there will be no net force on the plank and it won't matter whether the nail is there or not.

For the plank to move, it needs to experience a net force. For example, if the sphere was the wheel of a car that's accelerating, then as the wheel accelerates to the right, the plank will accelerate to the left. But in the steady state, nothing will happen to the plank as there is no net force on it.

UPDATE if the ball experiences friction w.r.t. the plank, the situation is a bit more interesting / complex. We know that friction must result in the slowing down of the ball, but there's a counter-intuitive thing going on here: if I supply a horizontal force to the ball that's pointing to the left at the contact point of ball and plank, then that would imply an accelerating torque on the ball... We solve this by looking closely at this diagram which is a close-up of the imagined point of contact and which explains one mechanism of rolling friction (where the flat surface deforms; it's possible to do the same thing when the sphere distorts but it's intuitively harder). 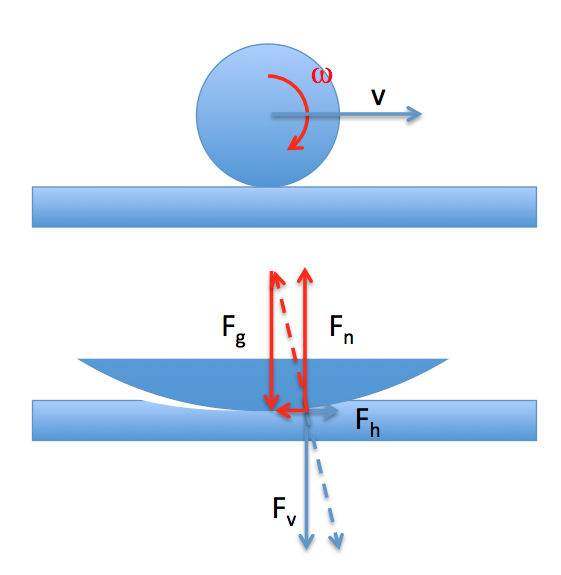 The "zoomed in" view (lower half of the picture) shows that there is some distortion that results in a net vertical force that is offset with respect to the force of gravity on the center of the sphere - this results in a retarding torque. As the ball slows down, the plank speeds up (because of the horizontal component $F_h$) - this is of course necessary to preserve momentum in the horizontal direction.

Quite a detailed description of this can be found at http://askthephysicist.com/classical%20mechanics.html - it's a very long page, so to find the relevant article you will want to find the phrase "My question has to do with traction and the movement of a wheel" which is the start of the snippet on rolling friction etc.

I would like to acknowledge the helpful discussion between myself and Dutch Brannigan which made me decide to add a diagram and further explanation...

From a qualitative point of view:

If there is friction between the ball and the plank, the ball will eventually stop relative to the plank.

When this happens, the system ball + plank must still possess the same momentum that initially was invested in the ball alone, which means that the system must be moving, relative to the frictionless floor, in the same direction that the ball was rolling in at the beginning.

Since the ball's slowing down is gradual, the plank's acceleration is also gradual.

When the nail is in, it transmits momentum from the plank to the floor, and the ball moves right while the planet moves imperceptibly in the opposite direction.

As I observe from the diagram the sphere is undergoing pure rolling,and as we know pure rolling does not need friction.So if the nail is removed there will be no force acting on the plank and hence the plank will remain at the same position and the sphere will continue the rolling motion.

The plank would start to move in the opposite direction of the ball. A simple free-body diagram will show that. Now, how far/fast the plank will move will depend on its mass, the mass of the ball, the coefficient of friction between the two, and the gravity present on whatever world this thought experiment is done on. Also the length of the board would come into play, as the friction is slowing down the ball...given a long enough board the ball will eventually come to a stop, and when it does, the plank will also have stopped.

Not the answer you're looking for? Browse other questions tagged rigid-body-dynamics or ask your own question.