What is “special” and what is “general” in Relativity?

Initially I thought in special relativity the velocity was constant, whereas general relativity allowed treatment of accelerated frames as well.

But now I have heard that SR is only valid locally?

What is “special” and what is “general” in Relativity?

Initially I thought in special relativity the velocity was constant, whereas general relativity allowed treatment of accelerated frames as well.

You'll see a number of places that claim that special relativity only works in (Newtonian) inertial frames. This is not the case, any more than is the claim that Newtonian mechanics only works in (Newtonian) inertial frames. One way to think of special relativity is that it corrects Newton's three laws of motion (but not Newton's law of gravitation) for the fact that the speed of light is finite.

But now I have heard that SR is only valid locally?

"Locally" means has a different meaning to mathematicians and physicists. Physicists care about what can be measured. If you can't measure it, it doesn't exist (at least not until better instruments become available). This means "locally" depends on how much mass-energy is nearby and on how good ones instrumentation is. "Locally" in the vicinity of a black hole is a rather small region of space-time. "Locally" is a rather large region in the middle of a billion light year diameter void in space.

GR: Curved Space-time (non trivial and dynamic metric tensor), theory of gravitation, generic coordinates transformations (usually $\Lambda \in GL(4)$, but more in general $\Lambda \in Diff(M)$, the diffeomorphism group of the Manifold). The equivalence of gravity and acceleration is manifest. You can always find a local inertial frame that is flat, and in this frame you recover SR.

Special relativity is physics in a $3+1$ dimensional Lorentzian spacetime, with the additional requirement that the spacetime is flat, which determines spacetime completely.

General relativity is physics in a $3+1$ dimensional Lorentzian spacetime, with no additional geometric requirement. An equation for the metric is required to determine the spacetime, this equation is the Einstein field equation.

A consequence of general covariance and the equivalence principle is that gravity is a feature of curved space-time, so general relativity has gravity while special relativity does not.

There are some people who point out that even special relativity can be written in a generally covariant form. This is true but if we are talking about why we call them special and general that is beside the point because it was only realised later.

It is certainly not true that special relativity cannot describe accelerations or non-inertial frames. It is just the case that in general relativity these are treated on more equal terms by attributing the difference to gravity.

If we assume that general relativity is the correct theory (as is confirmed by many experiments) then of course special relativity is only an approximation correct locally.

The statement that special relativity is valid locally is equivalent to general relativity. This was indeed Einstein's initial logic. He realised that every point in spacetime has a local inertial frame. In other words a falling man feels no gravity - gravity is a fictitious force based entirely on your reference frame!

Originally special relativity was thought to be applicable only to macroscopic inertial frames. If you take special relativity to be valid locally, you expand your symmetries to include all possible coordinate transformations. This generalization leads to general relativity.

"The Fabric of the Cosmos-Space, Time, and the Texture of Reality" by Brian Greene is the book which I read first to get introduced with GR and SR. Here is the brief passage to explain the general difference: 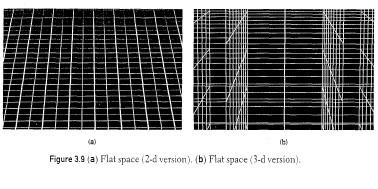 Not the answer you're looking for? Browse other questions tagged general-relativity special-relativity terminology or ask your own question.