I was told that "Snell's law of refraction implies that a light ray in an isotropic medium travels from point a to point b in stationary time." Why is this true?

Let's answer this in reverse. We'll find a path of stationary time and show it satisfies Snell's law.

The classic analogy and derivation for this problem are in the Feynman Lectures. I'll basically be reproducing that argument. Feynman imagines the material with a lower index of refraction (faster speed) as a beach, and high index of refraction as the ocean. Point A is on the beach and point B is in the ocean. You're trying to go from one to the other in the fastest possible time. The fastest possible time is also a stationary time, simply because minimums are stationary points.

There are many paths you can take from point A to point B. Here are three examples: 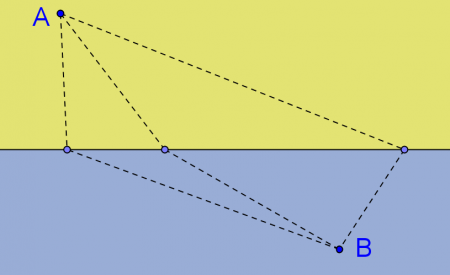 We want to find the place where nearby paths take the same amount of time. If we have two nearby paths, one spends more time on the beach and the other spends more time in the ocean. Let's draw two nearby paths, then draw circles with their centers at A and B. The circles indicate points that are the same distance away, so the little extra bits beyond the circles indicate the extra distance traveled on the beach and in the ocean. 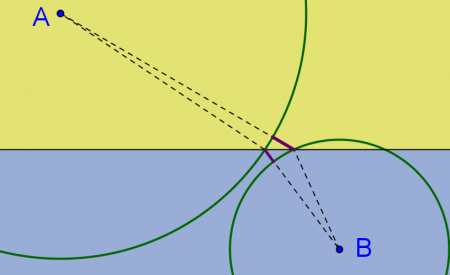 These two triangles have the same hypotenuse, that little horizontal segment between them. Call it $h$.

Not the answer you're looking for? Browse other questions tagged visible-light variational-principle refraction or ask your own question.

9
Why does change in speed of a wave make it refract?

1
Snell's law demonstration
0
Refraction and Internal Reflection
1
Does sound wave refraction obey Snell's law?
0
Doubt in derivation of Snell's law using Huygen's principle
9
Snell's law in vector form
0
How does every ray of light or photon can follow the same Snell's law in a very random states of matter like gases and liquids?
0
How can the speed of light at the interface separating two media be equal to that of one of the media?
1
Confusion Regarding Snell's Window and Critical Angle