Why is the equation for friction so simple?

Why is it that this equation is so simple and does not contain any other variables that account for the force of friction on an object? Does anyone know how this equation was developed?

It's so simple because it's only a first order approximation model to how friction actually works.

There are several other models, but to use them you usually need more parameters or other pieces of information about the system (for example, if there are fluid lubricants involved, the pattern of the surface, the materials involved, etc).

The magnitude of the friction force is independent of the area of contact.

This law dates back to Leonardo da Vinci:

Here is an example of experimental data showing the dependence of friction with normal force: 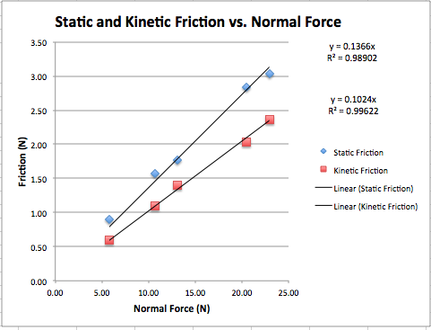 This also dates back to Leonardo da Vinci, who noticed that if the load of an object was doubled, its friction would also be doubled.

The kinetic friction is independent of the sliding velocity.

This is only somewhat true for small changes in velocity. Some models account for this dependence: 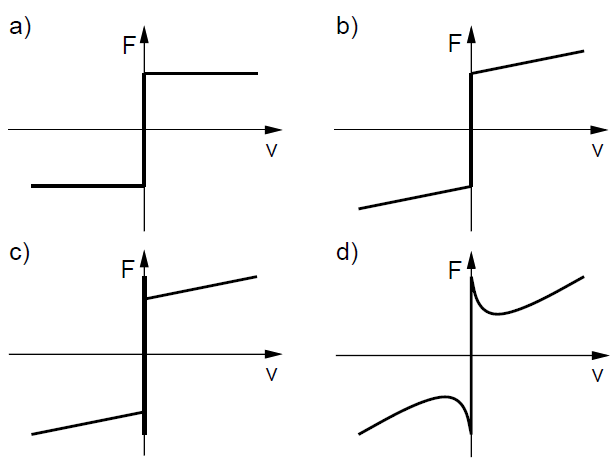 a) Coulomb model (without static friction)

Here is an example of experimental data showing the dependence of friction with velocity:

Here is an example showing non linearity with respect to the normal force: 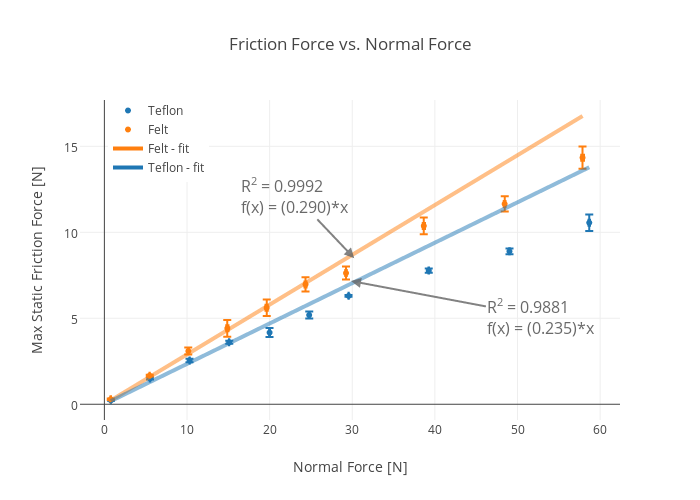 The author comments on the graph above:

What’s going on here? Let’s look at the data for the teflon (the blue data). I fit a linear function to the first 4 data points and you can see it is very linear. The slope of this line gives a coefficient of static friction with a value of 0.235. However, as I add more and more mass to the friction box, the normal force keeps increasing but the friction force doesn’t increase as much. The same thing happens for friction box with felt on the bottom.

This shows that the “standard” friction model is just that – a model. Models were meant to be broken.

Here is another simple article about the limitations of the Coulomb model of friction.

It's so simple because it just happens to be a very simple, idealistic model for explaining how friction acts. In reality, friction is significantly more complicated - for instance you have static/dynamic friction and possibly lubrication (leading to the whole field of tribology).

A mathematical model can be as simple as you want it to be; however, there is usually some sort of trade-off between simplicity and accuracy. Sometimes a simple model will give reasonable accuracy; sometimes it won't.

I can't say I know much about how the equation was developed, so I can't help you there.

Not the answer you're looking for? Browse other questions tagged forces friction or ask your own question.

2
Why is friction proportional to normal force?
0
Why does Friction$ = μN$?
0
How to develop the static and kinetic friction formula?
0
Why friction is independent of surface area?
1
Why does friction occur?
1
How friction works?
0
Why doesn't friction depend upon area of contact?
22
Dependence of Friction on Area
7
Does the contact area affect friction forces?
2
Why does Friction act Parallel to the Surface (Microscopic Level)?
See more linked questions