Making precise the statement "particles are excitations in a quantum field"

I've been trying to self teach QFT lately. I find that the basic physical idea makes sense, and I can keep up with the mathematical formalism without too much trouble, but I'm having trouble connecting the two.

It is usually said that QFT is necessary because particles can appear and disappear, and so rather than treat a particle as a basic entity as in non-relativistic QM, we instead have a field, and particles are excitations or quanta in that field. In the canonical formalism, the field is a field of operators which creates and destroys particles. For example, if we have a real scalar field $\phi$, then we know that its Fourier components $a_\mathbf{p}$ and $a_\mathbf{p}^\dagger$ act on the vacuum as $a_\mathbf{p}^\dagger |0\rangle = |\mathbf{p}\rangle$. Also, if in the Schrödinger picture $\phi$ is independent of time, that is, $\phi=\phi(\mathbf{x})$, then in the Heisenberg picture we can get time dependence as $\phi(x) = e^{-iHt}\phi(\mathbf{x})e^{iHt} = e^{-ipx}\phi(0)e^{ipx}$.

Looking at the last expression, I don't see how the particles come into play. It seems to me that the current state of the world is "encoded" in the kets, so for example if we have two particles with momentum $\mathbf{p_1}$ and $\mathbf{p_2}$, the state is $|\mathbf{p_1}\ \mathbf{p_2}\rangle$. But it seems that the time evolution of the field depends only on the Hamiltonian and not on (for example) the number of particles. Is this true? If it is, then how does that statement "particles are excitations in a quantum field" translate into the formalism?

Perhaps more simply: is the field any different if we have one particle or if we have two particles?

The talk about "particles" being "excitations" is handwavy, and comes about precisely because of the analogy of the usage of Fourier components that you talk about.1

Perhaps more simply, is the field any different if we have one particle or if we have two particles?

"The field" is inaccessible. Some fields aren't even observables (because they may not be (gauge) invariant in and of themselves), and even of those that are, you can only measure the expectation values w.r.t. some states. The statement "particles are excitations" is perhaps most "precise" in the LSZ formalism, where you take some definite-momentum particle-in/out states and obtain that you can calculate

by looking at some integral whose integrand has $\langle \Omega \rvert T \phi(x_1)\dots\phi(x_m)\phi(y_1)\dots\phi(y_n)\lvert \Omega \rangle$ as a factor, so you could say that this "looks like the field creates the particles".

In QFT, you have to abandon the notion that there is a real value for the field at every point - that would be the classical picture of the field just being the solution of the classical equation of motion. All you can have are expectation values, and the idea that there is some kind of field actually being "excited" is...ill-defined. It isn't clear at all what one would want to say with that. It's just a cute picture that many like, not a mathematically rigorous statement.

Of course, the time evolution will act differently on many-particle states than it will on one-particle states. But these states are states in the Hilbert space of the theory, and only by analogy (since they are created by Fourier components of free fields) identified with "excitations", an analogy that breaks down if we would not consider the asymptotic Fock space but instead the full (but sadly, mostly unknown) Hilbert space of the interacting QFT.

1I wrote about this some time ago. The analogy is not very helpful in my view. The mathematics are of the same form as that for an oscillator, but to say that particles are excitations is endowing the concept of field with an ontological weight that is unnecessary, and just tends to confuse people about non-perturbative, interacting QFTs, where it is not helpful at all to think in such terms.

I am adding this answer as this has become duplicate for the similar question Matter is Apparently just Field Excitations, But How the Heck does that Work? [duplicate] , and , in my opinion, the answer here does not clearly state that there exists a whole field of study, experimental particle physics, that uses the word "particle".

In order to be grounded in high energy physics and the available models that calculate predictions for experiments, one has to be aware of the progress in physics, how quantum mechanics developed in order to model mathematically and predict observations at what was the "particle" level because classical particles of matter were the ones seen in the experiments.

The theories successfully and progressively described and, important, predicted the results of experiments. The final stage is that what was observed as classical particles in the beginning of the study, became identified with probability waves, and eventually the progress of theoretical modeling their behavior led to quantum field theories.

The aim of quantum field theories to model the experimentally seen behavior of the quantum entities that sometimes are particles and some time are waves on quantum mechanical fields. 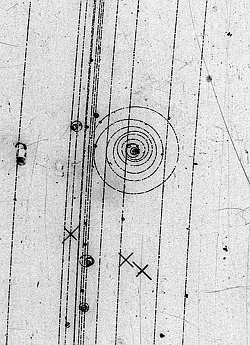 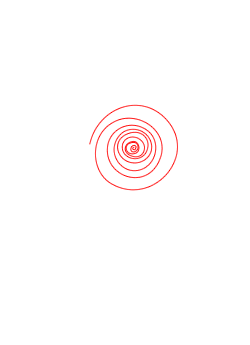 The straight lines are $K^-$ particles ( we now know they are composites of a quark and antiquark), and are made by consecutive small electromagnetic scatters on the hydrogen atoms of the chamber , with small energy/momentum transferred to the electron that just gives a dot. But there is a quantum mechanically based probability for the interaction to transfer more energy and make the electron leave with some momentum, and enter the spiraling track. Its continual loss of energy/momentum with scatters in the hydrogen medium make it spiral to a point. The path it leaves can be fitted with the classical mechanics path of an electron in a magnetic field,

The tracks above in principle can be modeled with quantum field theory,( in an overkill way,with a huge number of terms) , but the interesting interaction is the one giving the large momentum electron. For this picture, the assertion "Matter is Apparently just Field Excitations" is obviously just that, a badly founded assertion. One could accept the modified "Matter is modeled by field excitations given specific boundary conditions"

Not the answer you're looking for? Browse other questions tagged quantum-field-theory particle-physics or ask your own question.

0
Why do excitations not exist in non-quantum fields?
0
Matter is Apparently just Field Excitations, But How the Heck does that Work?
24
In what sense is a quantum field an infinite set of harmonic oscillators?
17
How to derive the theory of quantum mechanics from quantum field theory?
2
Why do some fields have a distance limit and other don't?

8
Quantum field theory meson scattering calculation (scalar yukawa theory)
3
Heisenberg picture with creation annihilation operators
4
Number operator in quantum field theory?
4
Why does Srednicki insist on $\phi$ having zero VEV?
5
Simple QFT simulation - how to do it
2
Degrees of freedom of quantum scalar field
3
Time evolution of 2-particle states in QFT in the Heisenberg picture
4
Use of projection operator $|0\rangle\langle 0|$ in a specific example in QFT
2
Why do some of the Feynman propagators for a complex scalar field vanish?