Chemical and stellar evolution in stars

I'm having an exam soon where I have to discuss/describe the follow figure: 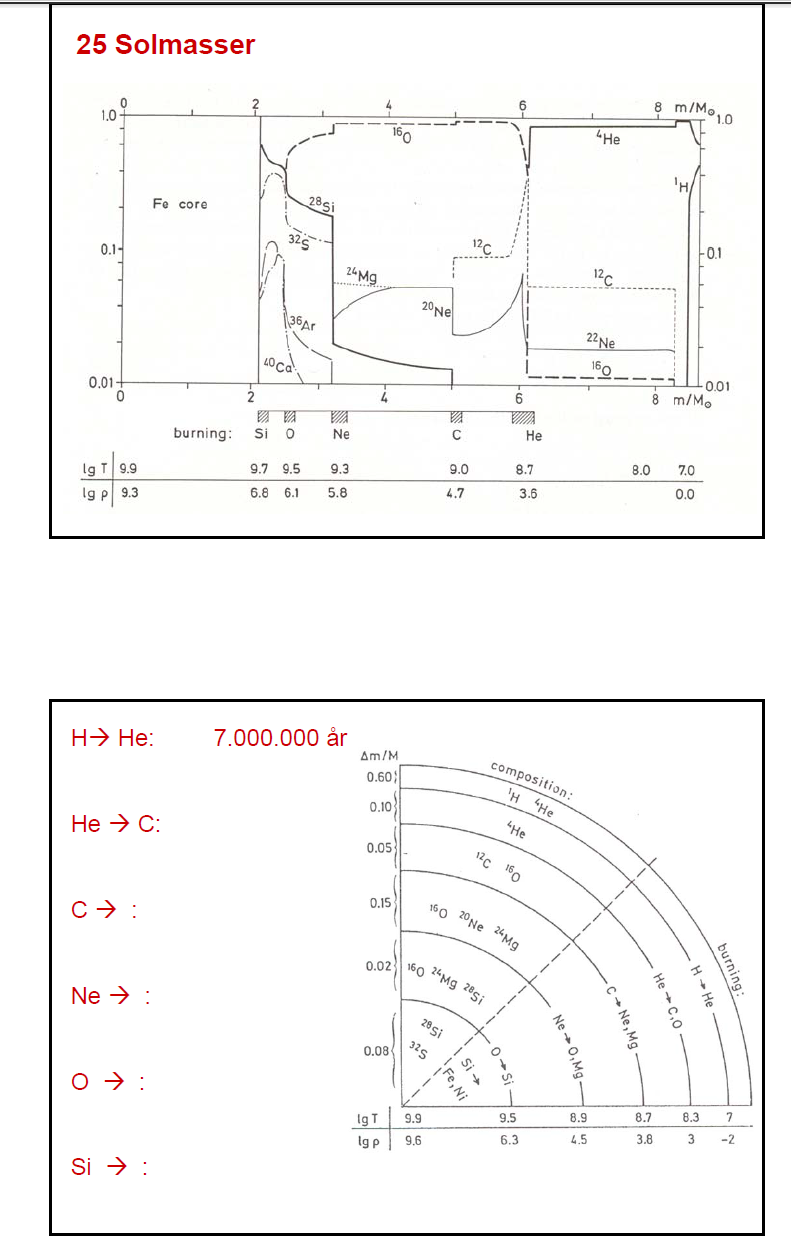 It's the first figure I have to explain, and it was on the same slide as the one below, so I'm thinking they are somewhat similar. But I can't seem to figure out what's going on in that figure ? "25 solmasser" is "25 sunmasses" if you were wondering. I'm pretty sure it tells me something about the time and evolution of each burning phase in a large mass star, i.e. hydrogen-burning, helium-burning, carbon-burning, neon-burning, oxygen-burning and silicon-burning. But it makes no sense (The first figure), and it's just on a slide with no text or explanation, so I'm not quite sure how to interpret it. So I was hoping maybe someone could give me some pointers?

I think the colloquial term for that type of plot is "spaghetti diagram" because you have a bunch of lines running across it. It's really the mass fraction as a function of interior mass. From our stellar structure equations, we have that $$ \frac{dm}{dr}=4\pi r^2\rho, $$ which is derived from the mass-continuity equation, so you can relate the radius, $r$ (in solar radius units) to the mass (given in solar masses). This type of Lagrange coordinate is the standard for these plots though.

Basically, the plot shows the dominant element(s) as you go deeper into the star. The closer to 1.0 it is, the more you're going to find that element. The sharp peaks/drops arise from nuclear burning--fortunately for you, those are labeled at the bottom, this is not often the case! Note that towards the right side you see ${}^1{\rm H}$ starting to peak while ${}^4{\rm He}$ starting to fall, this is where hydrogen burning takes place; this also indicates that your plot extends much further than what is shown there (which makes sense, given that your plot extends to a little over 8 solar masses for a 25 solar mass star!).

So, for instance, at around 6 solar masses, you have helium burning (triple-alpha process) that produces carbon-12 while destroying the helium. Carbon burning at about 5 solar masses destroys the carbon while producing neon-20 and magnesium-24. And similarly for the other burning processes. Note again, though, that each burning produces more elements than what is shown here, this is only showing the dominant species produced.

There is no time evolution in this diagram. This is simply showing you how much of each element at one particular time. The type of plot that shows a time-evolution is called a Kippenhahn diagram (see this, for instance). These are a bit more complicated, but really only show the burning processes as a function of time, rather than a mass fraction of abundances.

Not the answer you're looking for? Browse other questions tagged homework-and-exercises astrophysics fusion matter stellar-evolution or ask your own question.

0
Planetary nebulae, thermal pulses and mass loss
3
Exoplanet Mass-Radius Diagram
2
Boltzmann equation (Number density)
5
Why are stellar clusters useful for developing stellar evolution models?
4
Nucleosynthesis: other than big bang and supernova
4
How to tell if an orbit is closed given the potential?
5
Why do later fusion stages in a star last shorter?
3
Evolution of red dwarf stars
1
Is it right interpretation to interpret $E=mc^2$ using potential energy?
3
Pair-instability supernovae: a thermodynamic perspective