What's the difference between “numerical methods” & “mathematical analysis” as said by Feynman in his lectures?

While reading his lectures, I came to these lines:

On the basis of Newton's second law of motion,which gives the relation between the acceleration of any body & the force acting on it,any problem in mechanics can be solved in principle. ...to determine the motion of few particles,one can use the numerical method ... But there are good reasons to make a further study of Newton's laws. ....there are quite simple cases of motion which can be analyzed not only by numerical methods, but also by direct mathematical analysis. ......there are really very few problems which can be solved exactly by analysis. ....if there are two bodies going around the sun, so that the total number of bodies is three, then analysis cannot produce a simple formula for the motion, and in practice the problem must be done numerically.

Now, what did Feynman want to tell through this passage? What is the difference between numerical methods & mathematical analysis? When are these two used?

The other answers are correct. I would like to add to them with an example.

Take a spring, with spring constank $k$, with a mass, $m$, at one end and fixed to a large immovable object at the other.

Let the only force acting on the mass be due to the spring and the difference from the equilibrium position to be $x$, which can be positive and negative.

This can be represented by the diagram 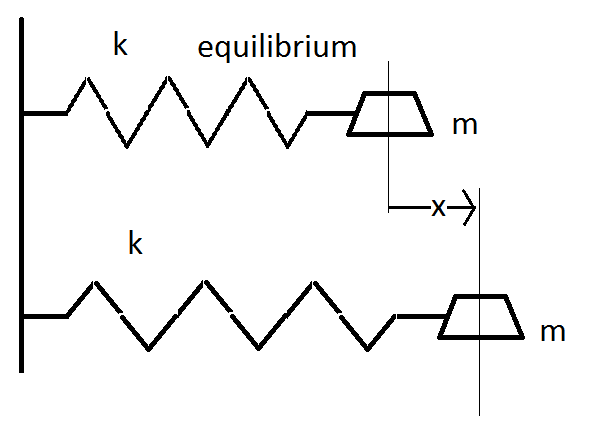 because the acceleration is ${d^2x \over dt^2}$. Thus, we get the second order differential

which can be solved analytically or with mathematical analysis to give

where $A$ is the amplitude and $\phi$ is a phase factor. $A$ and $\phi$ depend on the initial conditions.

Now the powerful thing about this solution, which is provided by mathematical analysis, is that it will be correct no matter what the values of $k$, $m$, $A$ and $\phi$ will be, provided that the model we have set up is correct. Furthermore, we can differentiate the equation for $x$ with respect to time to find $v$ and $a$ as functions of time.

[note, of course, this is a case of SHM, or simple harmonic motion, and very well know. Also the solution presented here is correct, but not unique]

It is possible, however, to use numerical techniques to simulate the motion of any combination of masses with any particular intial positions and velocities. The simplest one to describe is the Euler method. Time moves forward in discrete small steps $\delta t$. For every quantity, e.g. $x_{earth}$ the $x$ position of the earth, we find the rate of change of $x_{earth}$ with time $dx_{earth}\over dt$ and use it to find the new value after the small time step of $\delta t$.

There are better methods, such as Euler Cromer and Runge Kutta; they work on the same principle of moving forward in discrete time steps.

However, when it comes to more complicated problems, especially when experimental data is involved - there is not always an exact solution. This requires a computer to run an iterative-type calculation to provide the best solution that best matches the data, for example using least-squares to provide the closest estimate to a solution.

This is known as numerical method.

This is a usual term about solving differential equations. By "analytic" (or mathematical analysis), we mean finding an algebraic expression like $y=f(t)$ which satisfy the desired differential equation. But sometimes we solve the equation only at some special points. The latter method is called "numerical".

Since the Newton's law (and other principal equations in physics) is a differential equation, we use these terms for it.

49
Can we infer the existence of periodic solutions to the three-body problem from numerical evidence?
5
Numerical Tools to find Braiding Statistics of Quasiparticles
1
Numerical solving of 2D and 3D Schrodinger equations
5
Is it possible to propagate a relativistic system of particles in time using Verlet?
6
How to solve the 10000th eigenvalue of the anharmonic oscillator?