What is the average mass of galaxies according to Hubble Deep and Ultra Deep field observations?

What I am thinking here is why it is assumed that the Milky Way is the average galaxy ? One way to check whether or not the Milky Way is an average galaxy in mass and so in stellar mass is to check the results of the Hubble deep and ultra deep field images. While searching for information, I came across this page, which I somehow doubt its source of information, and it states: "Within the Hubble Ultra Deep Field there are approximately 10,000 discrete objects. Most of these objects are very small and likely have masses in the range of $10^5$ to $10^7$ solar masses. Note the mass of the Milky Way galaxy is $10^{12}$ solar masses."

So if "most" of the 10,000 galaxies seen in the Hubble ultra deep field image are that small in mass, then it is completely incorrect to consider the Milky Way an average mass galaxy. It is also clear from this diagram that the Hubble deep field extends to the "Normal Galaxies", while the Ultra deep field extends to the "First Galaxies". So it is expected to observe many small irregular and dwarf galaxies in the HUDF. As far as I understand, these small galaxies merge to form more massive spiral and elliptical galaxies that we see today. So again, if we are observing 10,000 small galaxies that should merge to form normal galaxies, we shouldn't be thinking that the image contains 10,000 galaxies similar to the Milky Way.

So, am I correct that the Milky Way is not an average mass galaxy in the observable universe and that we should use a smaller number when referring to the number of stars in the universe ?

I think the following image, which comes from Tomczak et al. (2014) and the so-called ZFOURGE/CANDELS galaxy survey should do the trick.

It shows how the galaxy stellar mass function (i.e. the number of galaxies per unit mass per cubic megaparsec that have a certain stellar mass) evolves as a function of redshift. As you might imagine this is not just a case of counting galaxies and estimating their masses - you have to account for the fact that it is harder to see low-mass galaxies.

Anyway, these are their results and they clearly show that a galaxy like the Milky Way that has about 200 billion stars and a stellar mass of about $5\times10^{10}M_{\odot}$ (note that the total mass of the Milky Way is dominated by dark matter), is quite a massive galaxy (note the logarithmic y-axis).

In other words, small galaxies dominate the statistics. However, when you look at the Hubble Deep or Ultradeep fields, it is quite difficult to use this information. You will always tend to see the most luminous and most massive galaxies and the low-mass galaxies will not be represented as shown in the mass functions shown in this picture. So there are actually two separate things here, and I'm not sure I can definitively answer either. (i) What is the average mass of a galaxy; (ii) what is the average mass of a galaxy seen in the Hubble Deep fields?

The answer to (ii) will obviously be much bigger than the answer to (i). Fortunately you can see from the plot that the straight(ish) line section below about the mass of the Milky Way are a power laws with slope $\sim -0.5$. That means that $M\Phi(M) \propto M^{+0.5}$ and when you integrate this over some range, it is the upper limit that dominates. So low-mass galaxies, do not dominate the stellar mass. In fact, it is galaxies about the size of the Milky Way that dominate the stellar mass. Galaxies with $M>10^{11}M_{\odot}$ (in stars) become increasingly rare, so these do not contribute so much. Therefore, very roughly, the number of stars in the Universe will be given by the number of galaxies with mass within a factor of a few of the Milky Way multiplied by the number of stars in the Milky Way.

I cannot provide an answer for the average mass for a galaxy in the UDF or any other survey volume because it is unclear how many of the lowest mass objects there are or what lower mass cut-off to work with. The plots shown for the CANDELS field below will be perfectly representative of the UDF or any other deep observation, the cosmic variance should not be an issue for order of magnitude estimates. 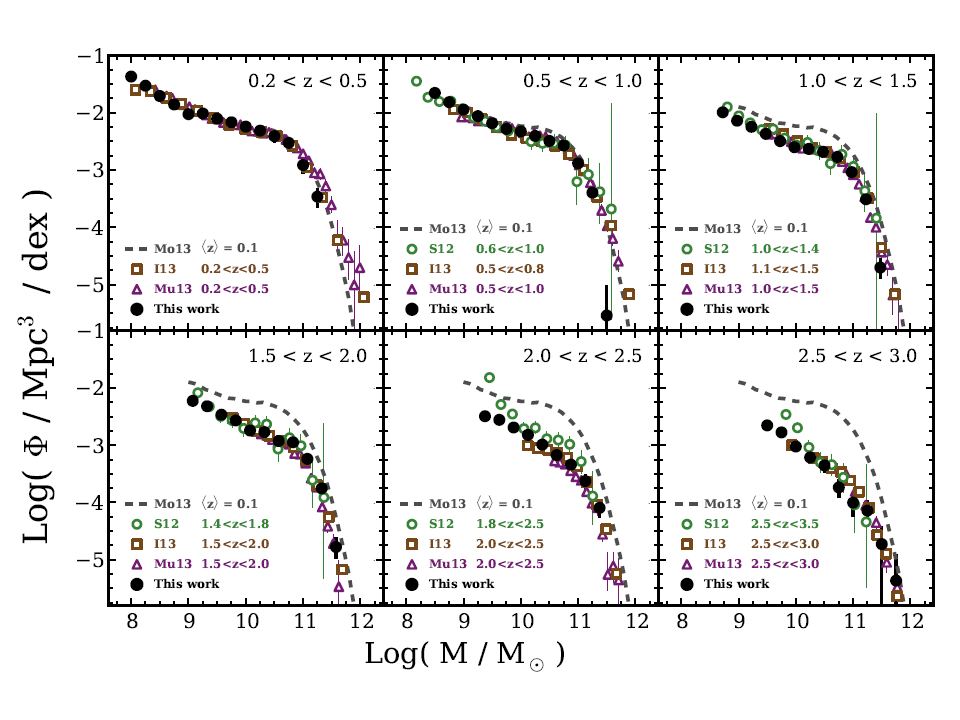 Not the answer you're looking for? Browse other questions tagged astronomy astrophysics galaxies observational-astronomy or ask your own question.

3
Size of the Observable Universe

5
Why are there not many detectable supernovae?
8
Solar system, visible stars and deep sky objects
3
What is an extreme deep field image (XDF) and how is it captured?
0
A question concerning the act of observing distant galaxies
8
What is the luminosity of the Milky Way galaxy?
5
According to the initial mass function, should there be more brown dwarfs than red dwarfs?
5
What is the area of the sky that is covered by the Hubble Ultra Deep Field image?
1
What is the limit of the deep field exploration?
3
Do satellite galaxies have the same proportion of dark matter as "ordinary" galaxies
1
How did the Holm 15A Galaxy BH reach 40 Billion Solar Masses?