What is the most compelling evidence of General Relativity in the presence of matter and energy?

The most oft-cited triumphs of GR are things such as the shifting perihelion of Mercury, gravitational redshift experiments, and gravitational lensing. But, as far as I know, these are only verifications of Einstein's equation in a vacuum: $$R_{\mu\nu}=0.$$ (In fact, I think the former two are predicted in the Schwarzchild metric, the spherical solution to the vacuum equation.)

Are we simply happy with this because it is the simplest form of an equation in the presence of matter and energy where the left hand side has the same conservation law as the right side (due to the Bianchi identity)? Or are there actual experimental/observational verifications of solutions to this equation where $T_{\mu\nu}$ is not trivial?

EDIT: I just want to be clear. There's a difference between "in the presence of matter and energy" and "near the presence of matter and energy". People keep on citing verifications of the vacuum field equation $R_{\mu\nu}=0$ that happen to have nonzero curvature because of nearby matter (the Schwarzchild metric is an example of this). The full Einstein equation comes to play when $T_{\mu\nu} \ne 0$, and this describes the expression of the metric tensor at the same point in the manifold where T is nonzero, not just a nearby point. I'm asking if anybody knows of any tangible verification of a solution to the Einstein equation for a nonzero energy-momentum tensor, so that excludes most of the examples people gave. And if there is none, how confident are we to assume the full equation just by symmetry arguments alone? I hope this makes things clearer.

The most compelling evidence of GR in presence of matter is, in my opinion, in neutron stars. These objects have a surface gravity $SG$ that is (geometric units):

So inside a Neutron star the usual equations of stellar structure derived from Newton are not accurate. Just for reference, the Newtonian equations are:

Now, let's go to GR. Let's represent the neutron star as a spherically symmetric (and static) object. (you can study a dynamic star, like I've done in my master's thesis, but the formalism is much more complicated). The metric is:

Let's assume that the star is composed by a perfect fluid. In this case:

in which $\epsilon$ is the energy density. Now solve the Einstein equations. It's rather easy, and you find the TOV equations (Tolman-Oppenheimer-Volkoff) that generalize Newton equations. They are:

Of course you have to add an EOS again. You can use a simple polytropic form like $p=\epsilon^{\gamma}$. (actually in real calculations you use tabulated data of the possible internal structure: degenerate gases of neutrons and electrons, quarks, heavy baryons, and so on).

Now it's time to solve numerically. You get for example predictions for mass and radius of a star of given central pressure. These predictions of GR nicely fit the experimental data.

Directly from my thesis, I can show you the (non particularly spectacular) functions $m(r)$ and $p(r)$ inside the star. 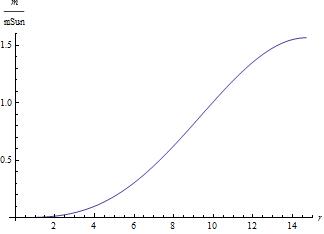 In the horizontal axis you can see the $r$ coordinate in $Km$. In the vertical one the ratio $m(r)/M_{SUN}$. The function m(r) is roughly speaking the mass inside a sphere of radius $r$, so the value $m(R)$ is the mass that you can measure from outside. The radius of the star is determined with the pressure graph: 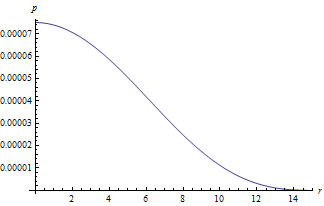 When the pressure goes to zero it means that we have reached the surface of the star. So in this case, the star as a radius of $\simeq 14 Km$ and is mass is $\simeq 1.5 M_{SUN}$. (every star is uniquely identified by his pressure, or equivalently his energy density, at the center of the star).

To be more explicit, here there is a parametric graph of the mass and the radius of the star when we change the central pressure. Every point in the graph is a stable stellar configuration predicted by GR (the blue line). The yellow and purple line are predictions from some scalar tensor theories of gravity (possible alternative theories to GR). 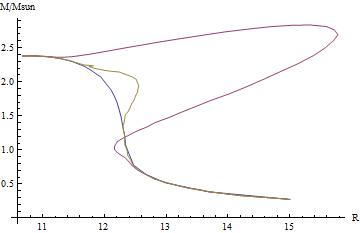 For example, an immediate prediction is that the maximum value of the mass for a neutron star is below $2.5 M/M_{SUN}$. (of course the precise value depend on the EOS you use). This is absolutely confirmed by experimental data.

Also, any effects on a galactic scale are best quantified in terms of a continuous matter distribution, since the central black hole is a small fraction of the galaxy's mass.

Also, you have all of the predictions of cosmology, which explicitly invokes a spatially constant matter density.

You also have the prediction for Chandrasekhar-style mass limits for neutron stars and white dwarfs, which have not been contradicted by observation, and are confirmed by the presence of white dwarf and neutron star supernovae. There would be no theoretical explaination of their utility as standard candles without Einstein's equation in the presence of matter.

Finally, even the predictions of the schwarzschild metric applying to solar system observations is dependent on the equation satisfying Birchoff's theorem. A different coupling to matter would not have to respect this.

Also, the hulse-taylor binary radiation effect is in no way dependent on either the schwarzschild solution or a matter-free distribution. It is a test of the gravitational radiation equation, which has a time derivative of the quadrupole moment of the matter source in it.

The field equations of general relativity give rise to a phenomenon called gravitomagnetism, which is related to "monopole" gravity in the same way that magnetism is related to moving electric charges by special relativity. There is conclusive evidence for gravitomagnetism just in the past five years, weakly from the Gravity Probe B mission, and more convincingly from lunar laser ranging.

Gravity Probe B was a very carefully-designed satellite which tracked the precession of gyroscopes in low earth orbit; GR predicts that the precession is different if the orbit goes to the east, with Earth's rotation, or to the west. It's profoundly non-Newtonian effect, but required very precise measurement; the final error bar was a little disappointing.

The lunar laser ranging experiment measures the time delay for a laser pulse to return from the retroreflectors left on the moon by Apollo astronauts. It turns out that because the moon and earth are both very massive, there are gravitomagnetic effects that change the moon's libration by roughly ten meters; the position precision on the timing technique is a few centimeters.

John Rennie linked in a comment to a review by Clifford Will; the PDG review is also useful.

Not the answer you're looking for? Browse other questions tagged general-relativity cosmology experimental-physics observational-astronomy or ask your own question.

9
What experimental proof has been found of Einstein's theory?
7
Evidence for electrodynamics in curved spacetime