LIGO flawed by the identical expansion of laser wavelength and arms in presence of a gravitational wave?

If I understand this well, the measurement assumes that a suitable gravitational wave reduces and prolongs one of the tubes and the extension will take effect in the phase-shifting laser beams.

In my opinion, therefore, this device does not work. Or am I wrong?

LIGO has now observed gravitational waves, so the theory for it working is clearly sound.

The light path itself is also affected by the gravitational wave. The Wikipedia article on LIGO says,

Note that the effective length change and the resulting phase change are a subtle tidal effect that must be carefully computed because the light waves are affected by the gravitational wave just as much as the beams themselves.

Wikipedia then provides a link to Chapter 27 of Kip Thorne's lecture series on Classical Mechanics. Section 27.6 of that Chapter covers, in great detail, how LIGO would actually work. In the idealized model, the gravitational waves (as seen in a local Lorentz frame of LIGO) change the length of the arms by an amount $\delta x=\frac12h_+\ell_x$ and $\delta_y=-\frac12h_+\ell_y$ where $h_+(t)$ is the gravitational wave (i.e., the increase in $x$ length is coincided by a decrease in the $y$ length of the same amount). The phase caused by this difference can be calculated to be $$ \Delta\varphi(t)=\omega_0\,2\left(\delta x-\delta y\right)=\omega_0\left(\ell_x+\ell_y\right)h_+(t) $$ where $\omega_0$ is the light's angular frequency (and $c=1$).

Since there is a phase shift, then the light intensity being sent to the photodetectors are also being modified, with the intensity linearly proportional to the phase shift, which leads it to being directly proportional to the gravitational wave: $$ \Delta I_{PD}(t)\propto\Delta\varphi(t)=2\omega_0\ell h_+ $$ where we've assumed $\ell_x\approx\ell_y\equiv\ell$. There is a bit more detail involved in getting a real signal from a real set up (e.g., accounting for local gravity), but the basis for LIGO is essentially the above.

Note that the phase shift itself isn't caused by the lengthening and shortening of the paths because the wavelength of light also changes by this factor. Instead, it is measuring the arrival time of the crests and troughs of the light wave between the two arms (cf. this LIGO Science Collaboration FAQ page or this Physics World article on the discovery), so it is more of a stopwatch than a ruler. 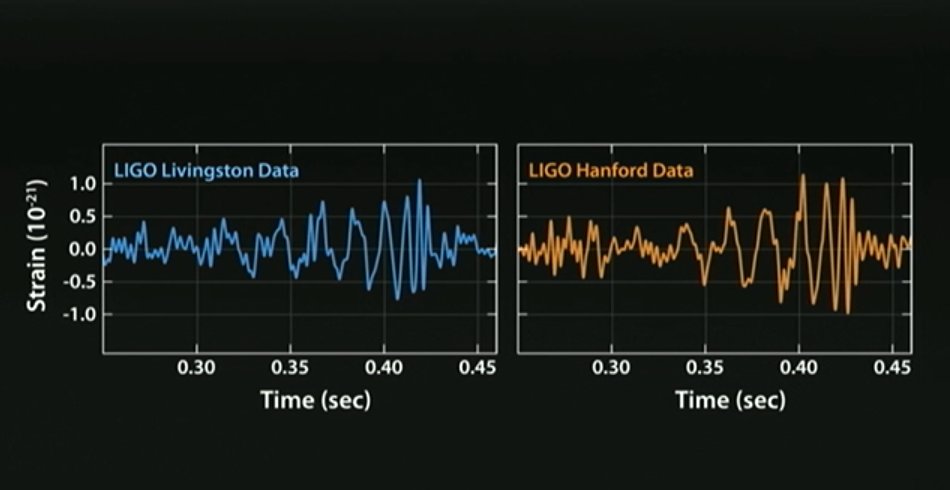 I have decided to add an answer to this because it is about the most commonly asked non-trivial question about the whole process that I have encountered. The paradox is that you can think about the detection in two ways. On the one hand you can imagine that the lengths of the detector arms change and that the round-trip travel time of a light beam is subsequently changed and so the difference in the time-of-arrival of wavecrests translates into a phase difference that is detected in the interferometer. On the other hand you have the analogy to the expansion of the universe - if the arm length is changed, then isn't the wavelength of the light changed by exactly the same factor and so there can be no change in the phase difference?

Clearly, the latter cannot be true. There is an excellent discussion of this by Saulson 1997, from which I give a summary.

Suppose that $h(t)$ is a step function so that the arm changes length from $L$ to $L+h(0)$ instantaneously. The waves that are just arriving back at the detector will be unaffected by this change, but subsequent wavecrests will have had successively further to travel and so there is a phase lag that builds up gradually to the value defined above in interpretation 1. The time taken for the phase lag to build up will be $2L/c$.

But then what about the waves that enter the apparatus later? For those, the laser frequency is unchanged and as the speed of light is constant, then the wavelength is unchanged. These waves travel in a lengthened arm and therefore experience a phase lag exactly equivalent to interpretation 1.

In practice, the "buildup time" for the phase lag is short compared with the reciprocal of the frequency of the gravitational waves. For example the LIGO path length is about 1000 km, so the "build up time" would be 0.003 s compared with the reciprocal of the $\sim 100$ Hz signal of 0.01 s and so is relatively unimportant when interpreting the signal. For higher frequency signals, there is indeed a reduction in the sensitivity of the instrument.

There is no paradox between the the two ways of thinking about this. So, you are correct that the wave changes both the lengths of the arms and the wavelength of light in the arms, but (obviously) incorrect that it prevents the instrument working.

10
How is it that distortions in space can be measured as distances?
5
How were gravitational waves discovered?
2
Is there any issue/concern for a slight wavelength shift of the laser light in the LIGO experiments?
1
LIGO discovery: if the space "time" metric is changed, how is it measured?
1
Why does an interferometer with mirrors even work?
0
How does LIGO detect accurate time differences if gravitational waves are also compressing and stretching the light waves-specific confusion below
0
How can gravitational waves be detected when spacetime bends the instruments?
0
LIGO Gravitational waves detection
14
Questions re significance of 2016 and 2020 LIGO observations
8
How do the LASERs in LIGO realize that space has expanded as a gravitational wave passes by?
See more linked questions