What is the highest naturally occurring gamma ray energy that you would see in background? And what is it is source?

The H.E.S.S. Gamma ray observatory in the Namibian desert has sufficient collecting area that it is able to detect (via Cerenkov radiation) very rare high energy gamma rays that were simply not available to space observatories with comparatively low collecting areas.

H.E.S.S. detects high energy gamma rays from all sorts of astrophysical objects and processes. A non-comprehensive lsit would include Supernovae, pulsars, starburst galaxies and active galactic nuclei as well as some gamma rays with no obvious counterpart.

For a brief scan of the gamma ray spectra of some of the objects observed it appears that gamma rays with energies of up to 100 TeV are routinely collected. Most spectra seem to follow a declining power law at high energies, so there will be higher energy gamma rays, they are just to rare that they are not being found. A back of the envelope suggests that if you wanted to find gamma rays at 100-200 TeV, they have a flux of just below $\sim 10^{-17}$ cm$^{-2}$ TeV$^{-1}$ s$^{-1}$ (see second spectrum below), and as H.E.S.S. has an effective collecting area of 50,000 m$^{2}$ (assuming 100% detection) it could find about 10 per year.

The spectra are corrected for detector efficiency, but you can see from the growing error bars that there are very few "counts" in the highest energy bins (literally one or two). 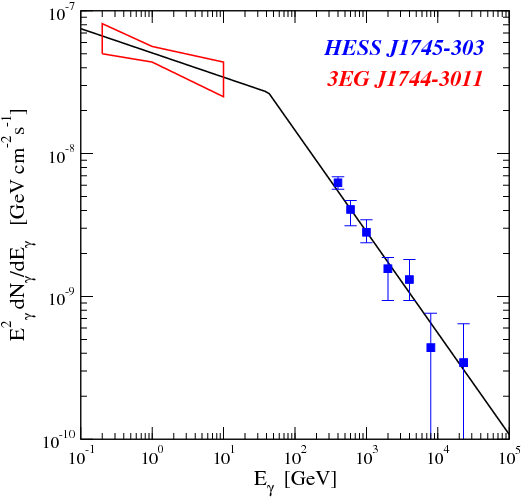 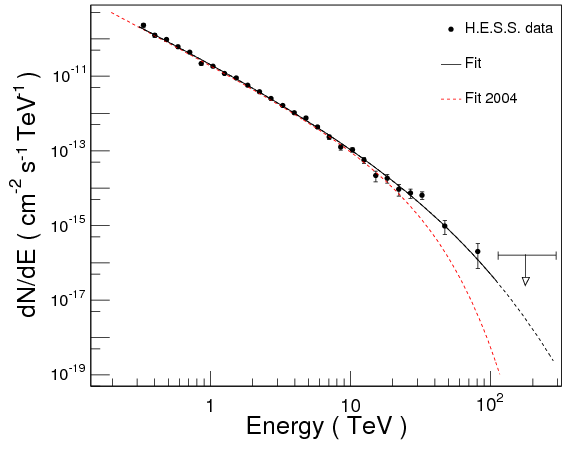 Not the answer you're looking for? Browse other questions tagged energy radiation gamma-rays or ask your own question.