Having just finished physics 2, I've been (slightly) exposed to showing that light is a wave with speed $1/\sqrt{\mu _0 \epsilon _0 }$ using the differential forms of Maxwell's equations, though this is the only derivation I've come across. Can you show the same thing using the integral forms? My first thought is that it may be more difficult since the wave equation is often given as a differential equation.

Note: I have not taken vector calculus (or even multivariable), and do not have sufficient mathematical (or even physical) background to explicitly do the derivation. I'm merely asking for a hopefully understandable solution or a source to the solution.

The hand-wavy way to do it is to consider a wave solution like the one below, and apply Faraday's law to loop 1, and Ampere's law to loop 2: 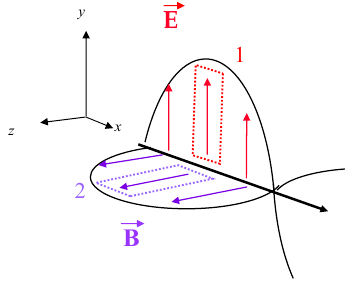 The differential and integral forms of Maxwell's equations are truly equivalent; they are essentially the same set of equations.

One can convert between the two using two mathematical theorems:

Now, what you are seeking to show is a wave equation, which as you have stated is a differential form; which is as follows:

Now, to get there from the integral form, what you do is the following: Take the third equation, for instance, which states:

Plug it in, and you get:

Change order of time derivative and integral (yes, you can do that) and collect under same integral sign:

Now, since this must hold for any surface S, the integrand itself must be zero. So we get:

Now, we are on our way to getting the wave equation, but what we have done as the first step is simply converting the integral form of the equation to its differential form! To continue, you would need to do the same to the first two equations, then apply $(\vec{\nabla}\times)$ operator to the equation we just obtained above... Use a vector identity, and get there...

You may say, this is not really using the integral forms to come up with the wave equation! Well, it is starting from the integral forms of the equations, but what choice do we have if what we are trying to reach a second-order differential equation anyways??

(The above procedure will give you the wave equation for $\vec{E}$. To get the one for $\vec{B}$, you will need to start with equation four...)

I think what I do is similar to what lionelbrits has posted. I calculate the voltage around a square loop anenna two ways: first, as the rate of change of magnetic flux from the peak of the magnetic wave passing through; and second, as the maximum difference of the voltages along the two vertical legs as calculated by integrating the e-vector.

If you assume that the E-vector and the H-vector are sinusoidal, and that the ratio between them is 377 ohms, then the only way those two antenna calculations give the same answer is if the speed of light is 3 x 10^8.

Not the answer you're looking for? Browse other questions tagged homework-and-exercises electromagnetism speed-of-light maxwell-equations or ask your own question.

2
How do we get a expression for speed of light $\frac{1}{\sqrt{\mu\epsilon}}$ using Maxwell's equation?