What is the isotope composition of hydrogen atoms in the sun? Are the ratios of protium:deuterium:tritium similar to those we find on earth?

What does the nuclear fusion of hydrogen atoms in the sun look like? Can protiums participate too? Where does, then, the helium atom get a neutron from, as there are no neutrons in protiums?

The main fusion reaction in the sun is the proton-proton chain reaction, which takes six protons and produces two protons, one alpha particle, two anti-electrons, and two electron neutrinos.

The deuterium nucleus is only barely bound and can be destroyed — dissociated into a proton and neutron — by absorbing a gamma ray with energy more than 2 MeV. This means that all of the sun's "primordial" deuterium, formed in the first minutes after the Big Bang, was destroyed before the sun got hot enough to begin fusing on its own. Essentially all of the deuterium in the sun exists as an intermediate step in the proton-proton fusion cycle.

Tritium, furthermore, is naturally unstable, with a half-life of only 12 years. This means that any tritium in the sun (or anywhere else) has been mostly produced in the past few dozen years. On Earth tritium is produced by cosmic rays interacting with stable matter. In the sun most of the tritium would come from neutron capture on deuterium (where I suppose the neutrons would have come from dissociated deuterium) or nucleon-exchange or proton-knockout reactions on helium-3 and helium-4.

A relatively authoritative solar model I grabbed some time ago from this paper (or more properly, from here) lists the helium-3 fraction, but not the deuterium fraction or tritium fraction. If we assume they are comparable (or at least related) then you can see that it still depends on where you are in the sun: 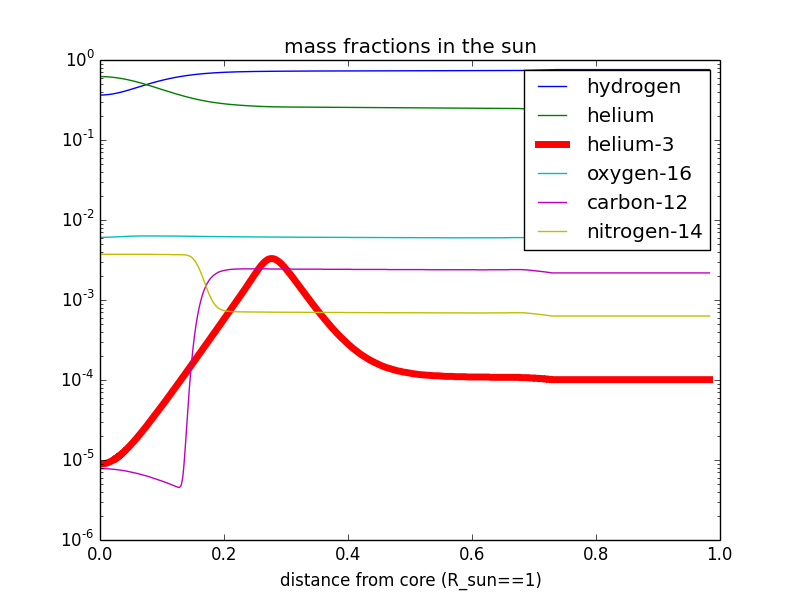 Protium is the most common isotope of hydrogen. This is mainly due to the fact that protium is one proton and on electron. In the sun there is a lot of protium(they lost their electrons). Two protiums fuse into one deuterium, two positrons(anti-electrons), two neutrinos. Tritium is rare. Sometimes electron capture happens and helium-3 turns into tritium and a neutrino. Tritium normally decays into helium-3, an electron, and one anti-electron neutrino. Some of the tritium is used for fusion reactions with other tritium and helium-3 nuclei forming helium-4.

Not the answer you're looking for? Browse other questions tagged sun hydrogen or ask your own question.

1
Requirements for hydrogen fusion
4
Temperature of fusion in the Sun vs. fusion in controlled experiments on Earth
4
Why is hydrogen or helium used in nuclear fusion?
1
If Hydrogen's nucleus lacks a neutron, then what is keeping the nucleus stable and the proton inside it?
2
Where is nuclear fusion occuring in the Sun?
0
Does the proportion of strong nuclear force in a star change during nuclear fusion?
0
How can heavier elements be made from hydrogen atoms?
0
Positron-electron anihilation in the Sun
1
What is the Hydrogen and Helium composition of the Sun in terms of their different states?