An accelerating electric charge will emit transverse electromagnetic waves. These waves are propagating away in wave fronts that become flatter and flatter as getting further from the source. So they will start to resemble a plane wave.

However, doesn't getting flatter mean the wave-lenght is getting smaller? How is that even possible in the first place? I thought the wave-length should be constant so the radio signal can retain its frequency!

Since the emitter is a point, the wave will never get "flatter". It will always look like a dipole pattern (for the non-relativistic case, for the relativistic case the forward and backward lobes become asymmetric, I believe, with a strong amplification of the emission into the forward cones, which should also become narrower). I think you are mistaking your mental image that stems from a selective magnification of the pattern's scale for the actual pattern. The "wavelength" for synchrotron radiation is not an easily defined quantity, since it's a broad spectrum. In the time domain the signal probably looks like a spike and like noise when many particles are involved.

The wavelength does of course remain the same. Think about two circles (representing wavefronts) evolving over time. Their respective radii increase at the same rate, such that the distance between them (the wavelength) always stays the same.

Now think about drawing a box of fixed size and placing it over the wavefronts. This represents your detector (or radio). At early times, with the box at a small distance from the centre, the wavefronts passing through the box might be noticeably curved. At later times when the wavefront radii are much larger, the same box would encapsulate what would approximate to two straight lines. In other words plane waves.

As perhaps you can see, the condition for this to be true is that the distance from the source must be much greater than the wavelength.

(Left) Expanding wavefronts at some time $t$. There is significant curvature seen inside the box (Right) Same wavefronts sometime later. Inside the box they are almost straight lines. NB: These spherically symmetric wavefronts would not be representative of an oscillating charge (which would have a dipole pattern), but whatever the wavefront shape, the argument about a decreasing radius of curvature holds true. 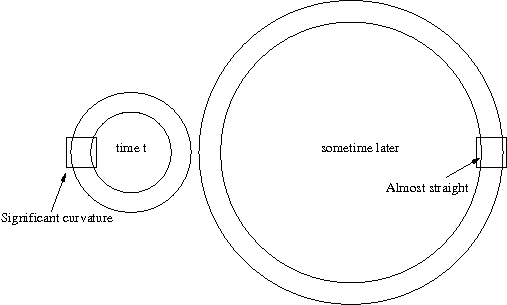 The radio wave one detect is modulated from antenna generator and contains the photons from the periodically accelerated electrons. The radio wave get weaker and weaker away from the antenna bar. That means the photons get distributed in a bigger and bigger volume, but the photons by himself don't changes. That is why a receiver can extract from only a tiny part of the radio wave informations.

Not the answer you're looking for? Browse other questions tagged electromagnetism electromagnetic-radiation radio or ask your own question.

15
Can an LC oscillator be used to generate visible light?
7
Is the wobbly rope depiction of a radio wave inherently wrong? And how do vectors of parallel waves align with each other?
2
Spectral decomposition of radio waves and quantization
0
Why do regulations exist for radio broadcasting?
2
Oscillations of plane waves
1
Radio Waves / Light: Atmospheric Refraction
1
By Huygens-Fresnel principle, will a spherical impulsive wave become non-impulsive in large distance?