Say Alice could instantly encode another human being, Bob, into photons.

Say Alice then beams those photons to a receiver on another planet, Vogon, one light year away. Charlie is controlling the receiver on Vogon and when Bob's photons arrive, he immediately sends the photons back to Earth. When they arrive Bob is reconstituted into flesh and bone.

Assume instant encoding and decoding times and that Charlie sent Bob's photons back the very instant they were received.

What are the timeframes observed to have passed for each of the participants?

Alice: 2 years would have passed?

Bob: No time would have passed?

Charlie: does it make sense to say anything about Charlie because he is in a different location?

If this is true, is there a continuum of effect (i.e. differing progression of time for Alice and Bob) as speed of propagation of Bob changes, and if so what is the relationship?

Edit: Assume the two planets are stationary with respect to one another.

This is the answer for the "continuum" bit of your question or what happens if Bob leaves for Vogon on a sublight spaceship.

I've assumed that Alice and Charlie are one light year away from each in the rest frame of either and that they are at rest with respect to each other (ie the separation will remain one light year for the entire experiment).

In general if you send Bob encoded in massive objects $m \neq 0$ which move in Alice's frame at speed $v < c$ then Alice will see the (entire) journey taking $\frac{2c}{v}$years.

For Bob the journey seems a little different. On the outward leg he sees himself at rest and the planet Vogon move towards him at speed $-v$. However because the distance between the planets was measured to be one light year in Alice's frame Bob will see the distance contracted by a factor of $\gamma = \frac{1}{\sqrt{1 - \frac{v^2}{c^2}}}$ (note $\gamma \geq 1$) so from Bob's point of view the distance will be $d = \frac{1}{\gamma}$light years and he will see the journey take:

The same calculations apply on his return journey so when he gets back he will have aged by only:

I plotted the difference between their ages after the trip (assuming they're the same age before Bob leaves) in the attached picture. 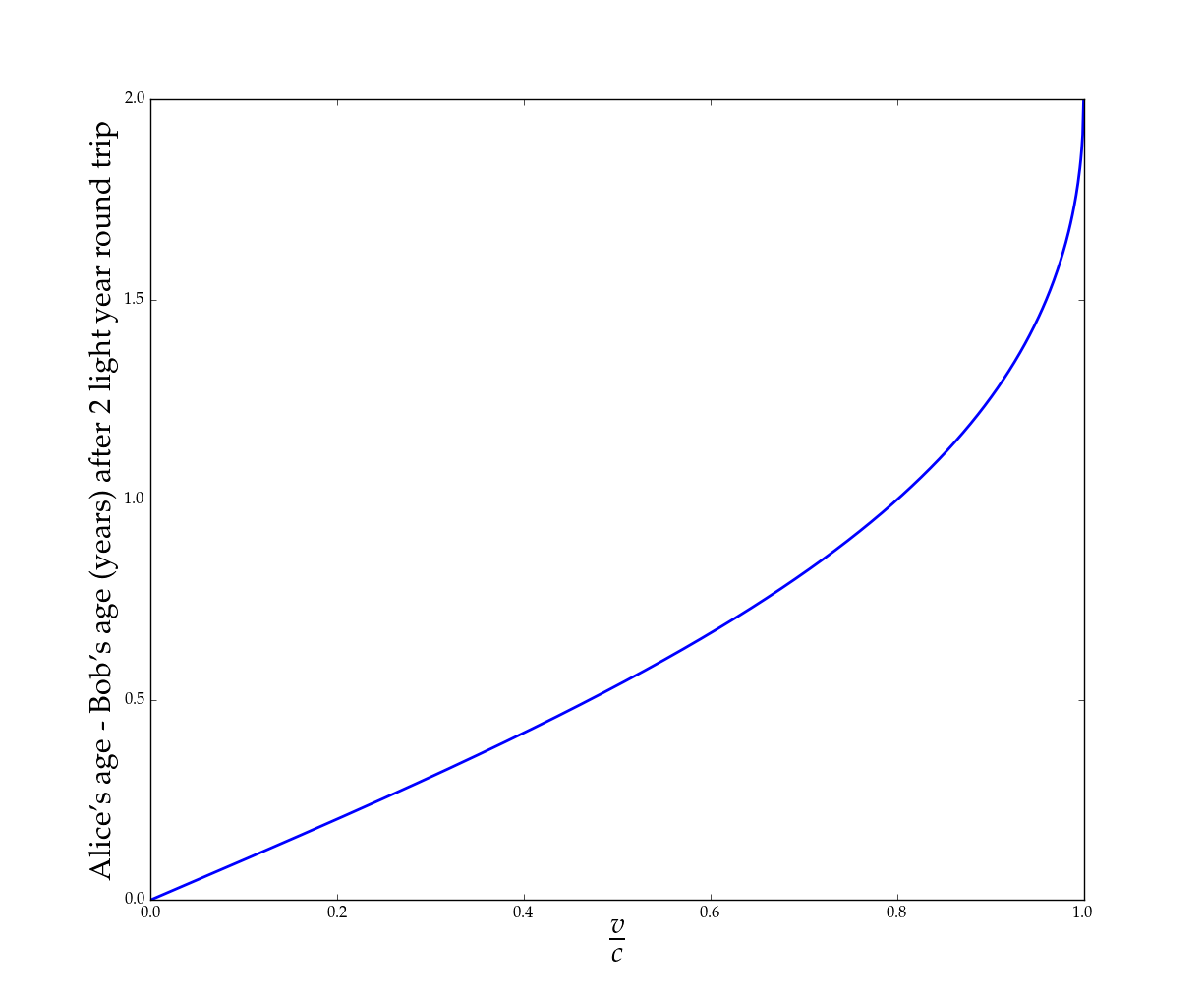 Bob: No time has passed

There are a couple of things to point out:

Summary: In it's simplest form Bob simply has a 'gap' in his time line. E.g. he has skipped 2 years (or whatever amount of time) that has passed for the other two observers.