What forces cause the centripetal acceleration in circular motion on a merry-go-round?

Suppose you stand on a merry-go-round spinning at $f$ revolutions per second and you are $R$ meters from the center. What forces act on you? 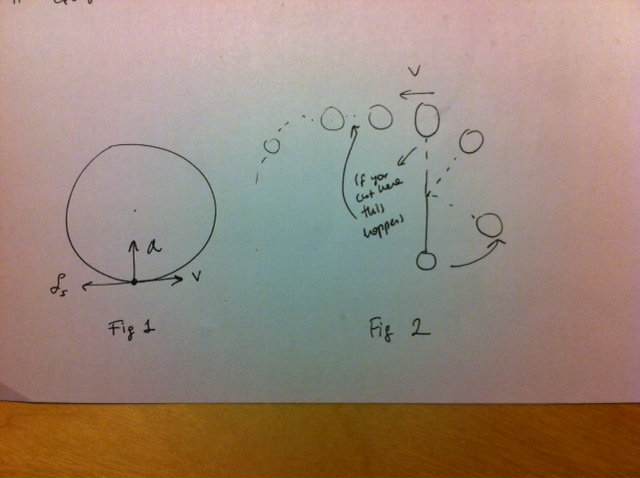 Wrong. You can go back to whoever told you that and yell at them. :-P

Seriously though: the direction of friction actually has nothing to do with the direction of motion. One really obvious way to see this is that you can make the direction of motion be anything you want, just by changing how you (the observer) are moving. For example, consider a hockey puck sliding forward on ice. Friction points backward. But then imagine that you're a hockey player skating forward, faster than the puck. Now you see the puck moving backwards (relative to you, of course). Yet friction still points backwards! It wouldn't make sense for the absolute direction of friction to change depending on how you're moving.

What determines the direction of friction is the relative motion between the two surfaces that are experiencing the friction. Specifically:

That's kind of complicated phrasing, so here's how it works in your example:

Not the answer you're looking for? Browse other questions tagged newtonian-mechanics forces friction centripetal-force or ask your own question.

3
How is direction of static friction not opposite in direction but perpendicular when dealing with centripetal forces?