Hypothetically what would happen in this situation? [duplicate] 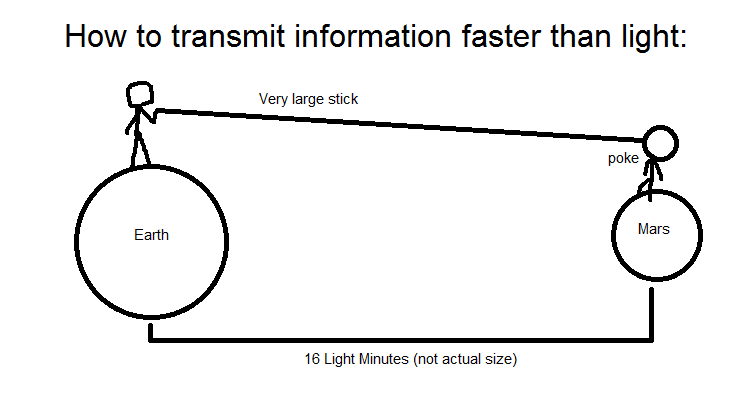 Of course you know from special relativity that no information can propagate faster than $c$, which includes your directing the Mars end of the stick to move through your Earth end push.

But you don't need to think about SR at all. Simply think carefully about what would happen if you did give the end of this rod a sudden shove. It has a great deal of mass and its whole mass cannot accelerate instantaneously. So you'll end up elastically deforming the rod's Earth end. It undergoes compressive strain. That compressive strai begets a compressive stress, which strains material a little further away from your push. Then this strained material pushes its neighbour. Write down an equation to describe this process in the linear regime (i.e. write down Newton's second law for each short length of the rod), where the stress is proportional to strain. I guarantee you'll get D'Alembert's wave equation with the wave speed equal to $\sqrt{\frac{B}{\rho}}$, where $B$ is the strain to stress constant of proportionality (the bulk modulus) and $\rho$ the rod's density.

113
Is it possible for information to be transmitted faster than light by using a rigid pole?